Wrapping Up 2022: Krampus from The Naughty or Nice Collection by Fresh Monkey Fiction 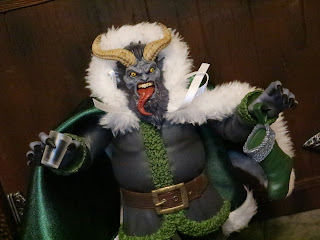 Today I'm really excited to check out the first of three of the figures I received from The Naughty or Nice Collection by Fresh Monkey Fiction. Yes, this is a toyline based on Christmas characters from the Santa Claus stories. You've got different versions of jolly old Saint Nicholas himself, Krampus, a zombie Santa, a robot Santa, and even an army of elves and nutcrackers, both good and evil. Or naughty and nice. Aha! Yes, this series features both heroic and evil Christmas characters and so far seems to be a hit with collectors. The first figure I'm checking out is Krampus, a deluxe Big Bad Toy Store exclusive. These are from Fresh Monkey Fiction, a company whose work I've been intrigued, but whose releases have been in the smaller 4 to 4 1/2 inch size. Since these figures scale well with most everything else I collect (Krampus is 1/12th), I jumped in and picked up a few. My figures arrived shortly before Christmas, but after Krampusnacht, or Krampus Night, the evening of December 5th. This line is a lot of fun and I'm excited to check out the first release in the series. Come join me (and I hope you've been well behaved this year!) after the break... 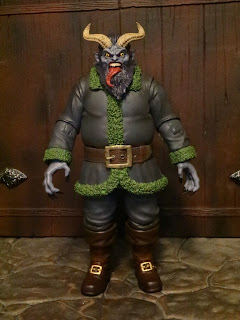 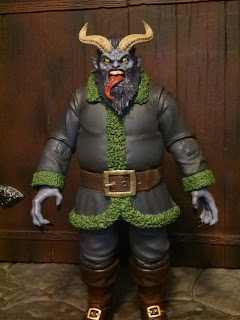 * For so many lines these days reuse is the name of the game. Fresh Monkey Fiction has designed an excellent "Santa Claus" body and they've reused it a number of different ways, here as Krampus. Rather than red and white, Krampus is decked out in a black coat lined with green fur. This is a really heavy, chunky figure with some fantastic sculpting. The paintwork is very solid and really makes this feel like way more than Krampus in a Santa suit (though there is a variant just like that, if you'd like). I love the charcoal grey outfit; it really makes Krampus look like the "shadow of Saint Nicholas." I was extremely impressed when I got this big guy in hand. 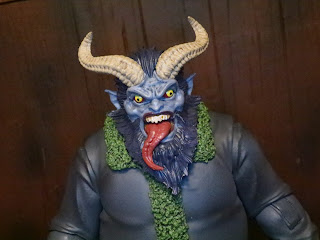 * Krampus looks crazy! He's a wild, hairy, animalistic being that looks just like the creature you find on the old Krampus cards floating around the internet. I love those bulging yellow eye and the long, twisted tongue. He's an evil, out of control guy! That beard is pretty cool, too. And those horns? Perfection. Fresh Monkey Fiction knocked this sculpt out of the park. I love how this one turned out. 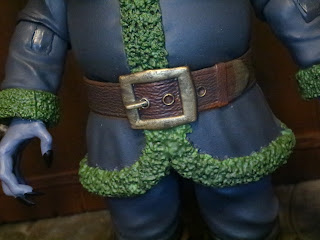 * The costume details are really fine, particularly the texture on the leather belt, the worn look of his brass belt buckle, and the intricately textured fur lining his suit. This just looks so good. Anyone could have made a generic Santa Claus figure/ outfit, but Fresh Monkey Fiction put some real effort into making something that's a high quality piece. 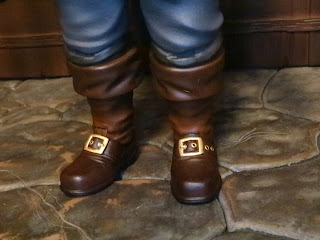 * Those boots are awesome, too. They've got a realistic leather look with a mixture of brown and black, plus neat and clean paintwork on the buckle and the grommets. 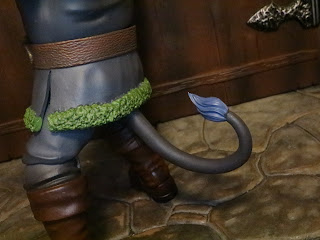 * Krampus has a tail that's articulated with a true balljoint where it plugs in on his backside. It does come separate in the package, so you'll have to attach it. 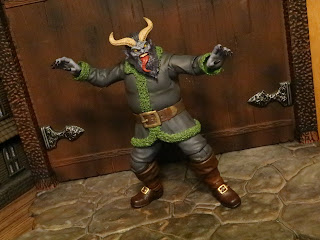 * Krampus is a big guy, so don't expect him to be pulling off any ninja moves or contortionist stuff here. For being a portly fellow, though, the articulation is excellent. The joints all feel very sturdy and have a nice range of motion to them. Again, no Kung Fu fighting or anything, but he's expressive and fun to mess around with. He's a very solid, durable feeling figure with some real heft to him. 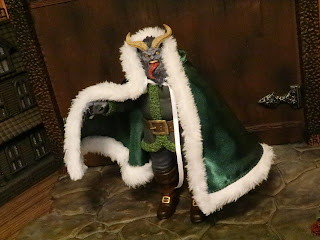 * This is sold as a deluxe figure and Krampus comes with a lot of extra stuff. First up is a gorgeous hooded cloak with white fur trim. This isn't your standard 1/12th scale action figure garment; it's really nice and quite elaborate. While it looks a little too nice for Krampus to be wearing, maybe he wears it to disguise himself when sneaking about looking for naughty children to torment. There are two ribbons you can use to tie it around his neck just right, and the hood works either up or down. 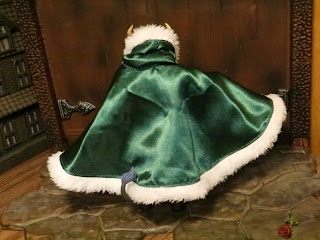 * The material of the robe feels like a silk or a satin, definitely not just a cheap fabric, and it has a nice sheen to it. 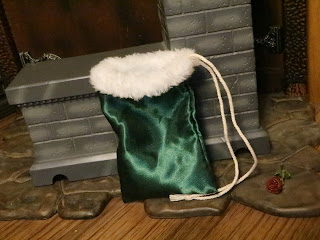 * He also comes with a large sack to fill with all sorts of... well, not goodies, but tricks, I guess. Or kids. Still have your Episode 1 Anakin Skywalker figure? Pop him in here! The sack is made from the same materials as the cloak and it cinches tight at the top. Fill it with other figures, a wad of tissue paper, or a bunch of random accessories, and have Krampus roaming about with a full load. 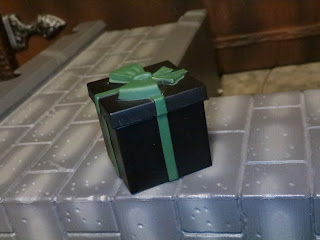 * Merry Christmas! Krampus left you something! Krampus comes with the standard package for this line, but it's painted here with a black gift box and a green ribbon. 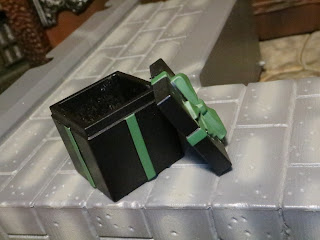 * The lid is removable on the gift (it might take a bit of work, but it does pop off) and you can put some stuff inside. The included coal fits in here, but you can surely find some crazier stuff to stick in the box, too. 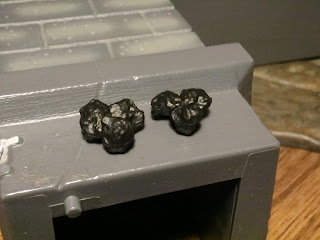 * Krampus comes with two sets of lumps of coal. They're the same sculpt, and each set looks like it's made of three separate lumps. 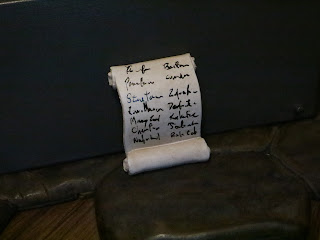 * Krampus also has a list, and you 'd better pray your not on it! The list is a nicely sculpted scroll of paper with a number of names scribbled on it. The names aren't really legible, but they look like they could be. My daughter sat for awhile with it trying to decipher the names, but it either looks like it's intentionally meant to look real but illegible, or it's the signatures of the team who worked on the toy. 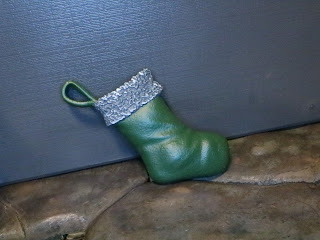 * Krampus comes with a green stocking with grey fur trim which you could hang on a peg of some sort or which he can hold via the loop draped over one of his claws. It looks like there's something in the stocking. Maybe an orange? Or a tangerine. It'd be a moldy tangerine, though, knowing Krampus. 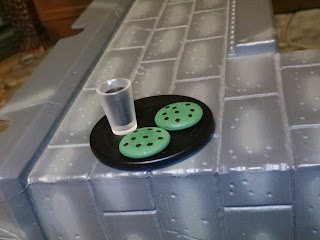 * A few years ago my dad burned a batch of Christmas cookies, so he decorated them with plastic insects, dyed some milk green, and made a funny photo of his Krampus cookies. That's kind of what we've got here. A black plate, two green cookies with black "chips," and a glass of black liquid. They're all separate pieces, too. The cookies are loose and the liquid even comes out of the glass, so you can leave it empty. It's a fun piece for making a display if you're using these figures as decorations. 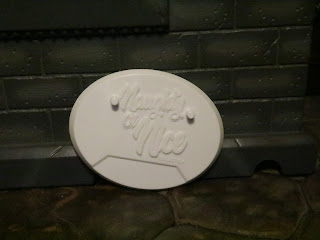 * Last up is a display stand. It's a very bright white (almost a snow white) and it has two pegs for keeping Krampus standing. He's a stout fellow with big boots, so he doesn't really need them, but they're there. The "Naughty or Nice" logo is also on the stand, which is pretty cool. 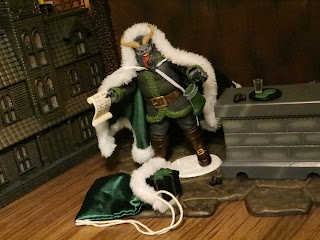 Y'all, I am really, really pleased with this Krampus figure. He's just so much fun and the accessories are really well done. Not only am I glad to see that this line has turned out so well but I'm also given a great boost of confidence for the Operation: Monster Force line, a collaboration between Fresh Monkey Fiction and BigBadWorkshop. Krampus is an Epic figure who really does feel very deluxe and well equipped. I've got two more figures from The Naughty or Nice Collection which I'll hopefully be reviewing before the end of January, so stay tuned!


If you're looking for more of Krampus, I've also reviewed the Krampus (Blood Red) minifigure from Kaiju Kaos: Smackdown.