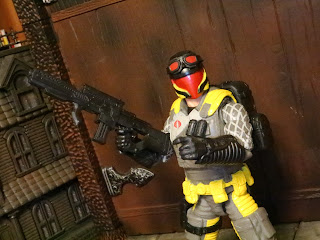 The Target exclusive figures for the Tiger Force and Python Patrol subsets were much easier to find than the previous Target exclusives, so if you wanted to pick up a whole squad of these guys you probably could have. I still have my original Python Patrol Viper from the vintage A Real American Hero line and, like that figure from 1989, this modern version is largely just a repaint of the previously available Viper figures. The 2021 Cobra Viper was also a Target exclusive. I wonder why he's been selected as a Target exclusive twice now? Let's take a look at this elite Cobra Trooper after the break... 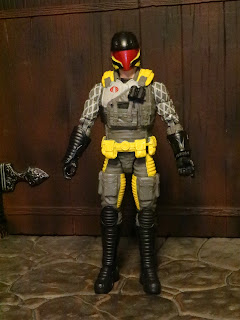 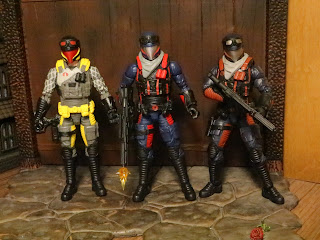 * There have been three standard Vipers released so far (along with an Officer). The Python Patrol Viper is on the left, the Cobra Island Viper is in the middle, and one of the 3-pack Vipers is on the right. What's the difference here? Largely just the paintwork, though it should be noted that the Python Patrol Viper does have the longer backpack peg and improved goggles of the 3-Pack Vipers. No bandanna, either. 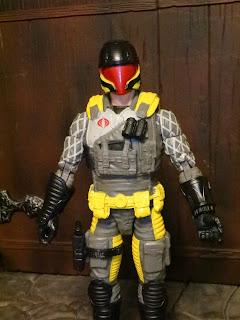 *  Like the original Classified Series Viper, the Python Patrol Cobra Viper does a superb job of capturing the look and feel of the vintage toy while also subtly updating elements of his outfit and gear. He's now donning an outfit in shades of grey and black with yellow highlights and it does stand in a positive way. The paint applications are mostly spot on, particularly on the "pythonization" details on his sleeves. His vest is a separate piece but it's not removable. It's assembled over the body. 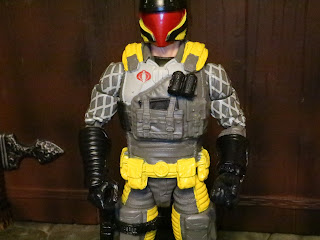 * The Viper's flak jacket and forearm pads are actually separate pieces, though they're not easily removable. If you heat the hands, you can get those forearm pads off, though. The paintwork is good here and the different shades of gray do follow different parts of the Viper's vest, highlighting new details. Is that some sort of tablet or computer in the front pocket of the Viper's vest? It's now given a black paint application and stands out against the grey. The Cobra emblem on the right breast is neat clean and the grenades on the left side are a cool touch, carried over from the vintage toy. 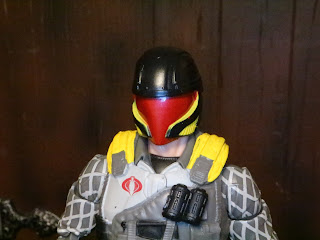 *  The red visor is one of my favorite things about the Python Patrol Viper and it's really bright here. It's the same great helmet as the previous releases, but now in the black and yellow color scheme. The helmet kind of resembles Cobra Commander's headgear with the shaped helmet and the face shield, but it clearly looks more designed for combat than Cobra Commanders' helmet. It's sleek and sporty. 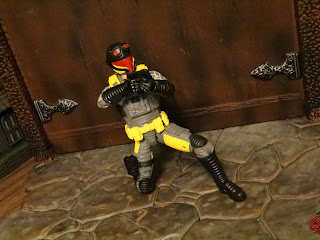 * The Viper still has  fantastic articulation. Plentiful joints, a great range of motion, excellent durability, and he can easily hold his primary weapon in two-handed firing poses. I love this figure and find myself always picking up the Vipers to mess around with them. 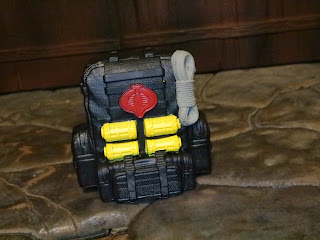 * The Python Patrol Viper also gets a uniquely painted backpack with the longer peg of the 3-pack Vipers, so it stays on better. Besides whatever the  Paw Python Patrol Viper has stored inside there, he's also toting around four grenades easily accessible on the back and a length of rappelling cord. The grenades are yellow here to add a nice splash of color (though they don't match the grenades on his vest), plus there's the standard paint hit on the Cobra emblem and the rappelling cord. 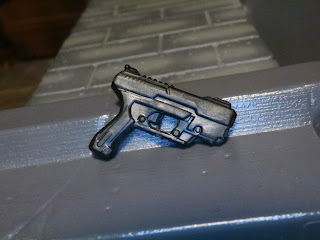 * He's also equipped with the standard Viper pistol. It's a simple, all black weapon with no paint highlights, but it's a cool sculpt. We saw these a lot early on in the line and I liked their very modern/ maybe slightly futuristic look. I like the Viper Officer's pistol better, but this one is definitely more of a "standard issue" sidearm. 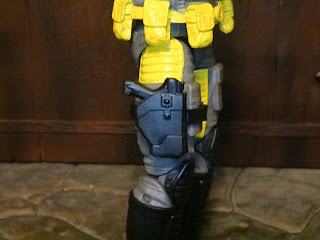 * He's also sporting the same holster as the rest of his Viper brethren. Nothing fancy; just the pace to store his pistol. 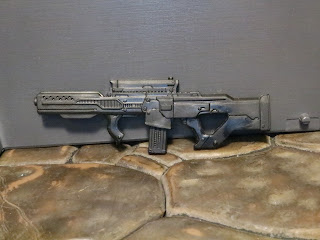 * This is the default rife for the Viper in this line and I still think it's one of my favorite guns in the series. Looking at the design, especially aspects like the magazine and the barrel, it really balance the look of an actual firearm with a slightly futuristic aesthetic well. I love these and the Viper just hold it so well thanks to the vertical grip on the front. 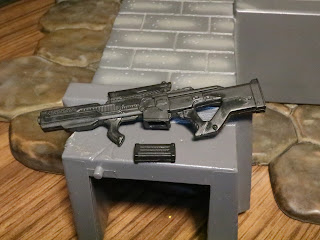 * The magazine is still removable, too. Nice! 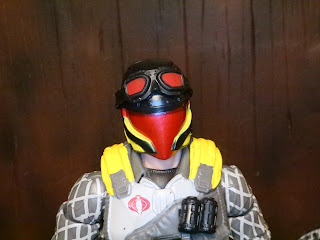 * The goggles on the original Classified Series Viper were really frustrating but these goggles work better as the strap seems longer and it's easier to fit the back of the strap on the lower back of the helmet to keep things secure and in place. Not perfect, still, but a big improvement. Also, the lenses all get those cool red lenses.

* They're still too finicky, though and fall off. Personally, I'd like a peg or something on the back to attach them to the helmets or an elastic strap like the Star Wars Rebel Trooper in Hoth Gear from The Black Series. 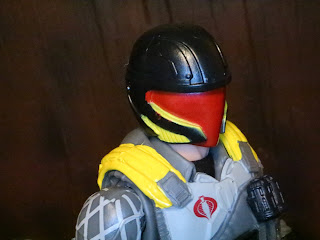 * My Viper has some messy paint on his visor. See the red on the side? It's rubbed off onto the cheek guard of the helmet. 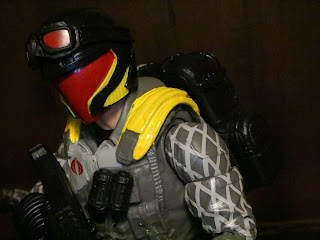 * The yellow paint used here just looks kind of gloppy on the shoulder strap. The Python Patrol B.A.T. also had gloppy looking yellow paint, so maybe it's just the look of this particular paint that doesn't work. 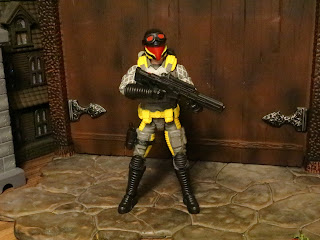 While I love the standard Viper and the 3-pack of Viper, this guy, while cool, just doesn't work for me a well. For one, he has some messy paint applications on his helmet and on his shoulder strap. Another reason is that he has less accessories than the previous figures. Yeah, the 3-pack was pricier per figure but those guys were loaded. He doesn't even come with the bandanna the original Viper and the other Vipers have had, though. He's cool and still a solid figure, but not as impressive as the other Vipers. I'm giving him a Good and a 1/2.

If you're looking for more Cobra Vipers check out my review of the G.I. Joe Classified Series Cobra Island Cobra Viper and the Cobra Viper Officer & Vipers 3-pack.