The 12 Days of Christmas: Lodar from Masters of the Universe Classics by Super7 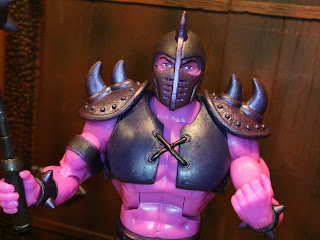 I'm a bit late on today's entry but for this installment of The 12 Days of Christmas, celebrating my 12 favorite toylines of all time, I'm checking out a figure from Masters of the Universe Classics: Lodar! If you're really going to nail me down on my favorite action figure line of all time, it's Masters of the Universe Classics. It's fun, diverse, colorful, well made, nostalgic, and it just keeps going! What was originally intended to be a small nostalgia based line with just a handful of characters expanded into a crazy huge line with prototype figures, dragons, horses, vehicles, and even playsets! Heck, even after Mattel decided to "end" the line Super7 picked it up and has continued releasing figures for it. Today I'm checking out Lodar, a minicomic based figure from the second series of Collector's Choice figures released by Super7. Lodar was just released this fall and I only obtained him recently, so he's getting the review treatment. Let's check out Lodar after the break... 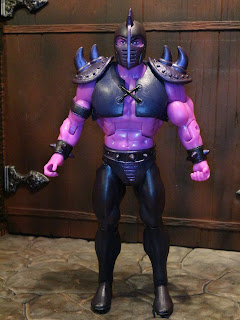 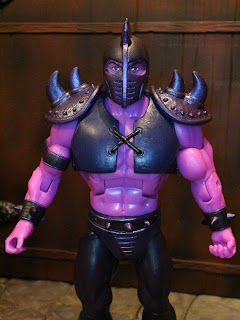 * Lodar is a pretty cool looking figure. He's not the most unique looking character ever but he definitely has a 1980s professional wrestler and/ or Mad Max villain vibe that is pretty appealing. He's also purple, which I love. I love purple. Lodar is definitely a "new armor/ new head" character, but that works for me. I'm always open to getting some new characters. 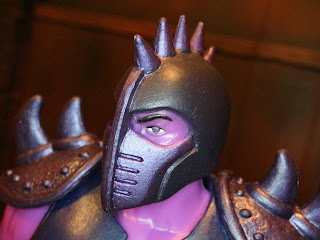 * The headsculpt shows a presumably regular looking purple guy looking through an armored helmet with some crazy spikes on the top. It's fairly simple, really, but it works. 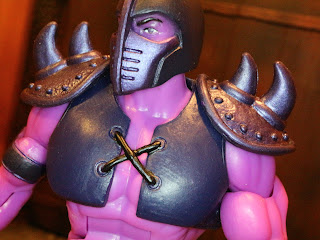 * While Lodar's armor isn't removable (I wish it were, as that was a fun feature early in the line) it is cool looking. It's simple, kind of like football shoulder pads, but given the awesome spikes that remind me of Beast Man's armor. 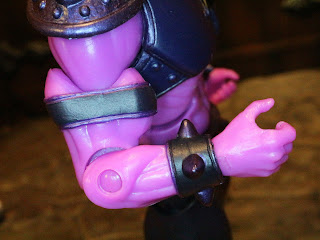 * Lodar doesn't just have plain arms. He's got some leather bands wrapped around his biceps and some spiked wrist bracelets. He looks like he just raided a Hot Topic! 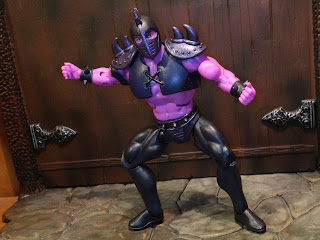 * One thing Super7 has improved on with the new figures is adding in more articulation. The swivel/hinge wrists and swivel/hinge ankles blend nicely into the already solid MOTUC body to create even better figures in the line. I think Lodar feels quite durable and ready for action! 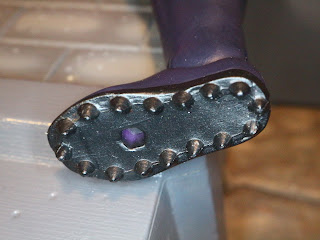 * I also dig that Lodar has cleats. He's definitely ready to give someone a stomping! 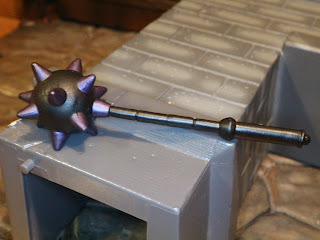 * Way back when I reviewed Castle Grayskull I thought that the spiked mace included with the castle may have been a pre-paint of an accessory for Lodar. This isn't the same mold, but it sure looks close! It's a great looking mace, though, with metallic purple highlights and a menacing aura about it. Lodar is definitely ready to smash some fools with this piece, right? 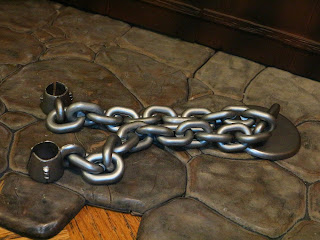 * While it doesn't quite recreate the brutal cover of Slave City!, Lodar does come with some chains to keep one of your MOTUC figures captive. The chain links are each separate and made from a very sturdy plastic while the cuffs are softer and made to fit over the wrist of any figure unlucky enough to cross paths with Lodar. 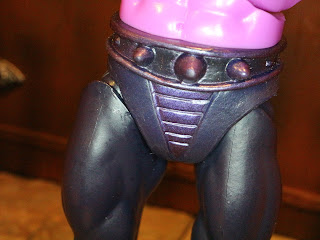 * I really don't like the way the hips on these guys are handled. The way the top of the hips can end up sitting over the crotch piece just looks so odd! 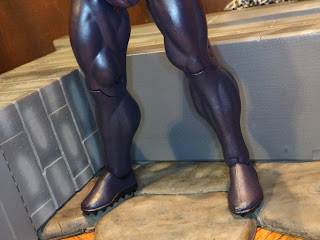 * Lodar's legs look really, really plain. He really could have benefited from some defined boots, right? 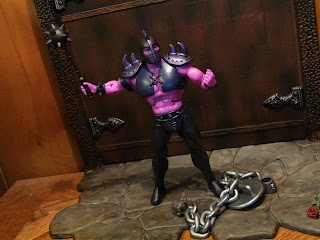 Lodar is a cool figure and definitely a character that a lot of fans have wanted for years. Again, he really is a figure that uses a lot of the standard parts and doesn't feel insanely unique, but he's fun and looks cool mixed in with the various unaffiliated villains in MOTUC. Still, considering that Super7 has raised the price on these guys to around $35 a figure, I do find myself expecting more, such as removable armor or some extra accessories. Lodar's a Good and a 1/2 figure: Perfect for fans of the line and property but probably easily skipped by most others. Still, isn't it great to see this line still trucking along 10 years later?


This is the first figure of Lodar I've reviewed. For more Masters of the Universe Classics figures from Super7, check out the following:
Fang-Or
Granita
Hawke
Karg
Quakke
Stridor
Wrap Trap
Posted by Barbecue17 at 12/20/2018