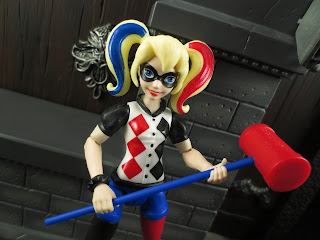 I was definitely sold on the Batman related characters in the 6 inch DC Super Hero Girls line from Mattel and while I managed to find Batgirl and Poison Ivy on my first trip to Target last month to hunt for this line, Harley Quinn eluded me. Fortunately, someone found her for me and now I've picked up this great Gotham trip from Mattel's newest DC action figure line. Considering that this line is focused on these characters as young super heroes and students at Super Hero High, I'm really curious as to how Harley Quinn fits in. Is she a villain? Does she cooperate with the heroes in this canon? Is she psychotic? Does she indiscriminately whack people with her giant mallet? Who knows? It's really cool to see that Harley Quinn, a character introduced during my childhood, has become so popular that she can even headline a toyline targeted towards kids. Pretty cool, right? Get a closer look at her after the break... 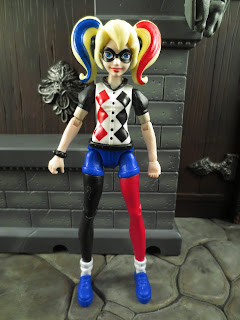 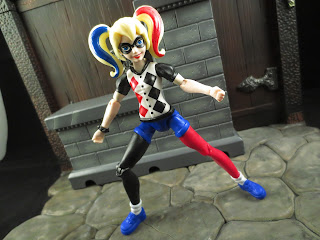 *These are definitely action figures and they're packed with a fair amount of articulation. Certainly not as much as a DC Comics Multiverse or Marvel Legends figure, but certainly more than the 5 poa figures we're seeing dominate many lines these days. What's nice is that these are also solid, well constructed toys. None of the joints feel frail or fragile, which works since these are made for being played with by kids. 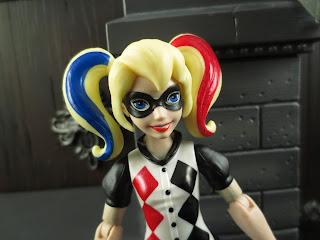 * Harley's headsculpt is incredibly! I really like how she has a mixture of Harley elements from different eras: The dual pigtails, the classic mask, and the blue and red hair. This really is a fun figure and I love how much character Mattel has expressed just through Harley's hair. The paint is also incredibly clean and neat. 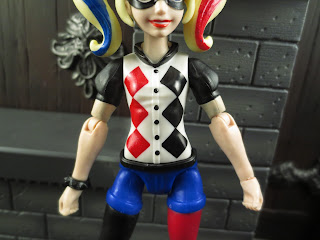 * I'm also really impressed by Harley's outfit. It manages to be really bright and colorful, capturing Harley's personality, with some cool homages to her classic look while still delivering something we've not seen before. While this is supposed to be Harley Quinn at Super Hero High, this could also be something you might see Harley wear when she's not out..doing whatever she does. Harley's not really a straight villain anymore. Not that she's necessarily a full blown hero, either. If she were on the D&D alignment chart, she'd be chaotic....chaotic. Definitely not chaotic neutral. Just chaotic. 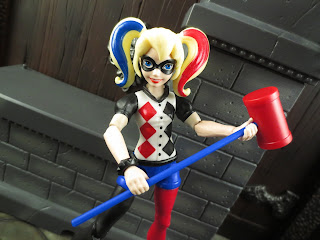 * I'm really glad that Mattel gave Harley her mallet. She's really the only character in the first series to include what could clearly be identified as a weapon (Wonder Woman's Lasso of Truth doesn't scream "weapon!") so it's cool that she has something like this as it just fits her personality. I like the blue and red color scheme, too. It's a bit garish but that kind of fits her personality. 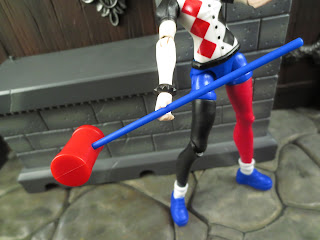 * Harley's hands are kind of rubber and the handle of her mallet is really thin and a bit fragile feeling. Honestly, if you try and pose her holding this mallet with only one hand, it's probably not going to work well. She really has to hold this thing with both hands. 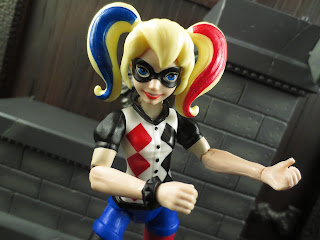 I'm really glad that Harley turned out so well. She's bright, colorful, and really fun. I'm really curious to see how Mattel continues to expand this line as quality figures like Batgirl and Harley really show off what this line is capable of. She's another Great addition to the line and seems to be one of the most popular figures of the six characters from series one. Fortunately, Target seems to be stocking these really frequently, so just keep checking back at your nearest score if you strike out the first time.