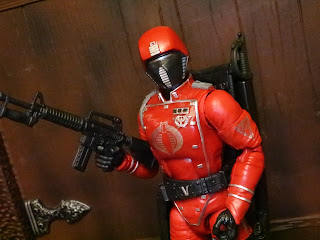 So far as I'm concerned, the Crimson Guard is the last of 2022 G.I. Joe: Classified Series releases that I'm checking out as the remaining Python Patrol and Tiger Force Target exclusives really seem like 2023 releases that leaked out a bit early. The Crimson Guard is the third figure in the series that also includes Dusty and Zarana, and while some people found the Siegies in late summer/ early fall, mine was the last figure from the most recent series I got my hands on. The Crimson Guard are supposed to be the most elite Cobra operatives out there and in the comics they functioned like sleeper cells, embedded as regular citizens in regular towns across the country. Their uniform is very dressy but this figure is also loaded with functional combat gear, so it's clear he's ready for anything. Let's take a look at the Crimson Guard after the break and see if he's up to snuff for the Classified Series.... 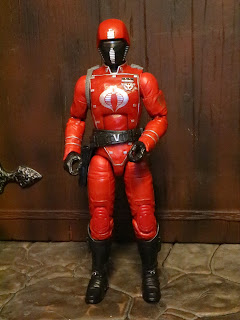 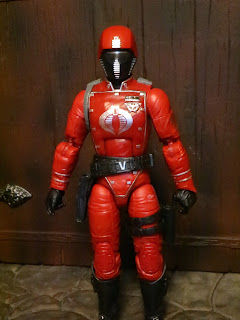 * The look of the Crimson Guards hasn't varied much over the past 38 years: A crimson red dress uniform with silver highlights and black uniform elements like gloves, boots, and belt. The only time the outfit has really changed beyond color swaps (Python Patrol, desert) was the DTC release in 2005 with a more elaborate jacket and the 2013 Renegades Retaliation release with the removable flak jacket. This guy stays pretty classic, though, and the silver paint decorations are all neat and clean, making him look like a million bucks. There's a lot of detail on the decorative parts of his outfit, such as the epaulets and cord, and on parts of his uniform like the belt. 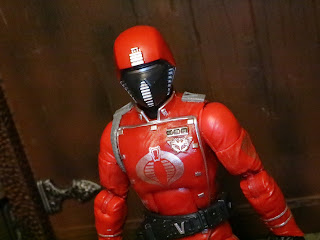 * The helmet looks great and matches the vintage toy nicely with much nicer detail work on the grill for the nose and mouth. There's also a Retro version of the Siegie coming out, but he has more silver in the face like the comic and cartoon versions.
* There's some nice detail work on the ribbons and medal on his chest, too. It all looks fantastic, even in hand and up close. 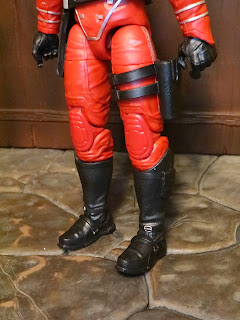 * The Crimson Guardsman definitely has noticeable kneepads on here and I love how they add a bit more of a tactical look to him. He might look like he's ready for being on ceremonial duty or for an inspection but he's also ready to roll if he needs to spring into combat. Those boots are slick, too, with a great leather texture to them. 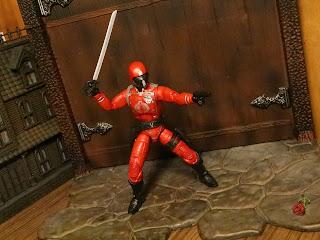 * I'm definitely repeating myself when it comes to the articulation of Classified Series but it's always excellent. The Crimson Guard has a quality build with a great range of motion. He's fun to pose in a variety of poses utilizing any of his four included weapons. 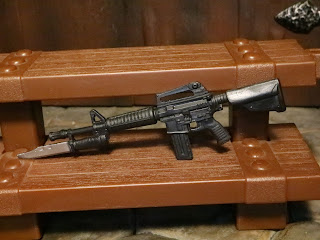 * The Crimson Guards are supposed to be sleeper agents, living and working in communities across the country with their gear hidden in their homes. The Crimson Guard comes with what looks to be an M4 rifle, which works as a solid modern weapon for the Siegies. It's a pretty standard rifle that could easily pass for an AR-15. The rifle has a bayonet attached for some close quarters fighting, too. 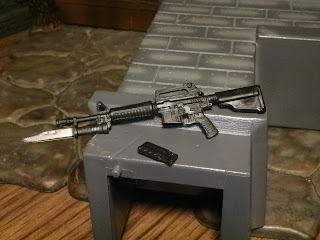 * Not only does the rifle have an excellent sculpt but it also has a removable magazine. I'm so happy this is a pretty standard feature on most figures in this series now. I just love it. 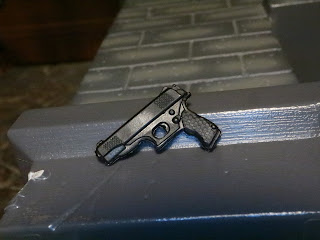 * The Crimson Guard sidearm is pretty standard here and is a big upgrade from the more ceremonial style pistols or super short shotgun carried by most earlier CGs. It's just a basic pistol but it gets the job done and looks to have a snakeskin texture on the grip. 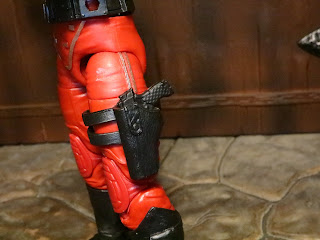 * It slips right into the removable holster on his left hip. 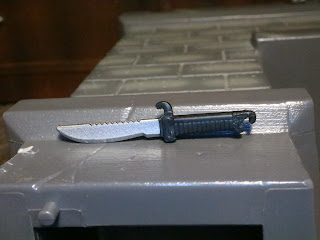 * This knife is really cool, too. It has a snake head design on the butt and a hook on the guard. It's a nasty looking weapon that seems like a unique trophy awarded to the Siegies to carry. 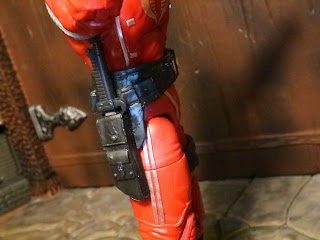 * There's a fantastic sheathe attached to the belt on the right side where the blade can slip inside perfectly. 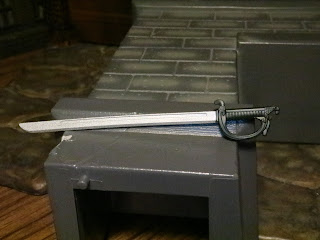 * Last up is a ceremonial sword. The 2013 Crimson Guard was the first one I can recall coming with a ceremonial sword and it's an addition I'm glad Hasbro included (I would have liked to have seen the armored vest, too). It's a great sword sculpt with a snake motif on the butt and handle that matches the knife. 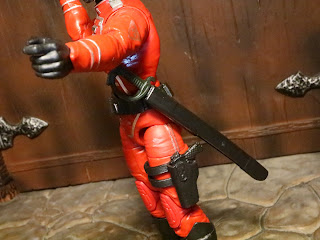 * Want to have Crimson Guard on display for inspection? A scabbard is included which holds the sword, and it can be placed on the Siegie's left hip. Get ready for a duel, Fred! 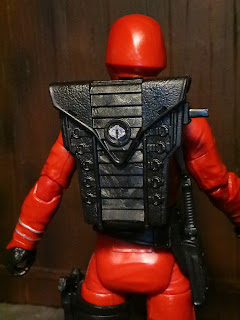 * This version of the Crimson Guard comes with a black backpack that looks pretty sophisticated. Not necessarily filled with technology or anything, but it's almost designed more like a high end briefcase than a backpack. It's got a little silver Cobra logo on it and everything. The retro version coming out has the classic red backpack, so if you really want a red backpack wait for that version. 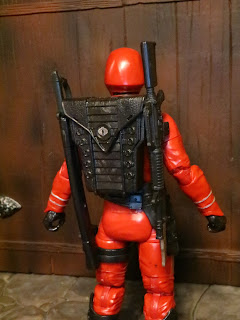 * You can even use it to store the sword and the rifle. The scabbard plugs in on the left side while the rifle's trigger guard fits over a peg on the right side. Now the Crimson Guardsman has his hands free! 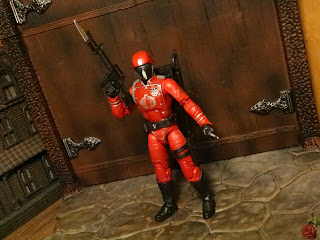 The Crimson Guard is another figure that could easily be considered one of the best of the year for the Classified Series. He's an excellent figure with a few solid updates, fantastic paintwork and colors, and a really nice complement of accessories. I love when a figure comes fully loaded like this! The sword was a great addition. The retro version is coming out soon and we've also seen images of a Python Patrol version, but I'd also wager we'll see an unmasked "Fred" version at some point, too. Maybe with a swappable helmet? That'd would be pretty cool. A two-pack with a swappable head Fred series Siegie and armored Cobra Commander would also be pretty nice...