Action Figure Review: Faker (Leo) from Masters of the Universe ReAction by Super7 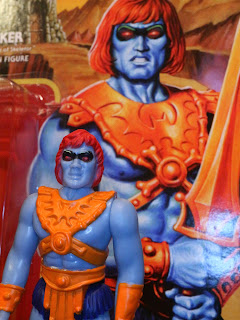 A month or so ago Super 7 released a series of Masters of the Universe ReAction figures that mostly focused on variants inspired by the vintage Indian releases from Leo Toys. Leo Toys had some interesting variants that have become quite desirable over the years and one of the most popular variants is Leo's Faker. It was released in 1987 and features some interesting differences from the standard vintage Faker. I've already reviewed the standard Faker who came out earlier this year, so this review's going to be a bit brief since this is largely a repaint with Skeletor's torso. Let's check out the Leo Faker after the break and see what all the rage is about... 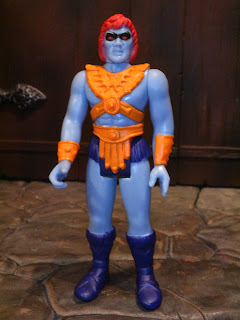 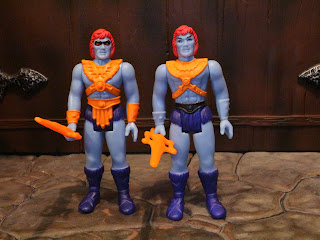 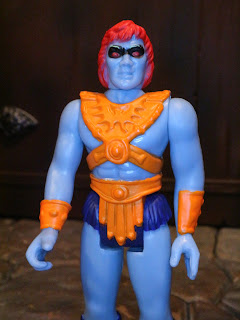 * Leo Faker looks great! There aren't any new parts here but the figure is quite accurate to the vintage Leo Toys figure. The biggest difference that the Leo Faker figure had was the presence of Skeletor's armored belt, which the standard Faker did not have. It's a cool look for Faker, even if it's not that unique. The Leo Toys Faker also didn't have the electronics panel that the vintage Faker had on his chest, so the absence of that detail is warranted here. 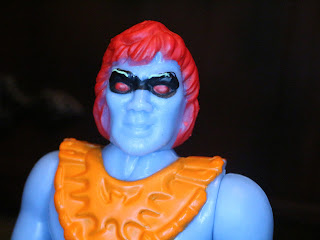 * The most striking feature of the Leo Toys Faker is the red eyes surrounded by black. It's a really creepy look on the vintage toy and Super7 captured it well. I really wish Super7 would have gotten the chance to either release this figure in MOTUC or, at least, to release an accessory set with the repainted head, orange Skeletor armor, and an orange Havoc Staff. 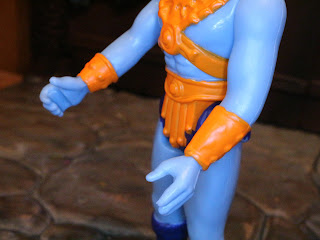 * While the vintage figure doesn't have the wrist bracers painted, I really like the fact that they're painted here. It makes the figure look just a little bit better than if they hadn't. 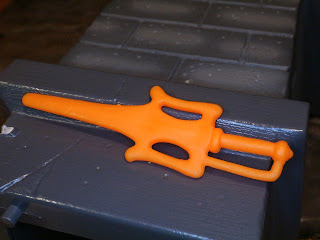 * Leo Faker comes with an orange copy of the Power Sword, which is the same as the sword that came with He-Man. It's a bit oversized but it matches the vintage look well and fits in Faker's right hand snugly. 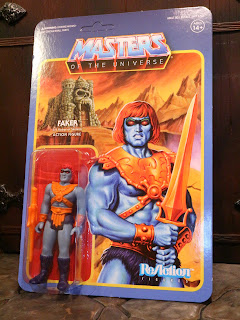 * The card art on most ReAction figures released by Super7 is beautiful and their Masters of the Universe line is no exception. Faker features the same beautiful illustration from the standard figure, illustrated by Jason Edmiston, but now he's got the creepy eyes and more orange painted details. To preserve the card I actually made a slit in the top of the blister so I can slide the figure in and out. It work great and allows the figure to be displayed inside and outside of the card. I've got mine hanging on a metal pegboard similar to what you'd see in a retail store! 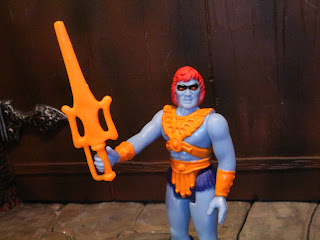 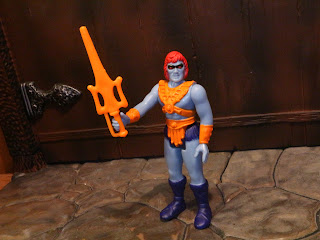 You know what? I actually like the Leo Faker better than the standard Faker. Yeah, it would have been nice if he had the orange Havoc Staff but I'm still thrilled that he's so cool looking and has more unique paint applications than the standard figure. Generally a variant of this level wouldn't be a big deal but, c'mon, this is Masters of the Universe: Any vintage variant is a big deal! This is a cool little subset from Super7 and I'm excited to check out a few more Leo variants over the next week or so! This guy's a Great figure and a worthy addition to a MOTU collection for sure.


For more Faker reviews I've also reviewed the M.U.S.C.L.E. Faker from the Series 3 Pack C, the Ultimates He-Man (which came with a Filmation Faker head), the Mega Construx Faker from the Battle for Eternia Collection, the ReAction Faker, and the VYNL Faker.