Ferociously Furry February: Grizzlor from Masters of the Universe by Mattel 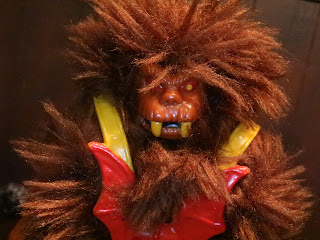 Welcome to the first review of Ferociously Furry February, a month-long special review series paying homage to one of the greatest Masters of the Universe characters of them all: Grizzlor! Grizzlor was released as part of the fourth series of vintage MOTU figures in 1985 and was part of the initial members of the Evil Horde. In the vintage MOTU toyline the Evil Horde was presented as a group ruled by Hordak who are out to destroy Eternia. They were an evil faction pitted against both the Heroic Warriors and the Evil Warriors and Grizzlor was kind of their berserker. Billed as the "Hairy Henchman of the Evil Horde" and "The Ferocious Figure with Fur" Grizzlor was a wild creature who seemed more intimidating than most of Skeletor's cronies. This is my original childhood Grizzlor and I'm darn proud of how great he still looks after all of these years! Let's take a look at one of the most unusual Masters of the Universe figures produced in the vintage toyline after the break... 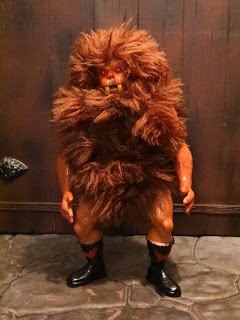 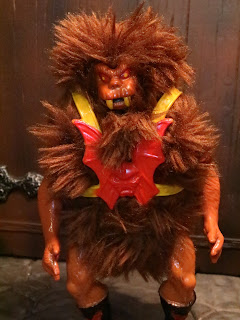 The Positives:
* Grizzlor's claim to fame is his crazy, hairy body. What is he exactly? Apparently first designed by Filmation, Grizzlor has been compared to all sorts of things: A grizzly bear, a werewolf, a sasquatch, and a Tribble among them. Grizzlor looks larger than most other figures due to the amount of hair he has. His body is actually just a simple flat torso while the fur is part of a "suit" placed over the torso and head. The dark brown of his fur and his hairy arms definitely help him stand out in the MOTU line. There's no one else, not even Beast Man, who looks as savage and crazy as Grizzlor in the vintage line. 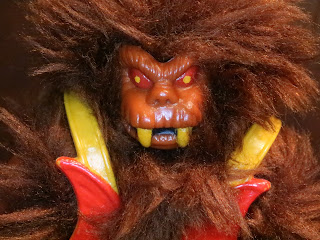 * Grizzlor has a really cool and creepy face! Those red eyes, those yellow fangs; he's terrifying! I know the massive hair can seem a bit silly at time but there's a pretty frightening figure here. 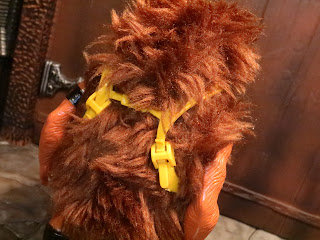 * The fur on Grizzlor is really nicely done. I'm very proud that I kept mine looking so fantastic over the past 30 some years or so. The quality is quite nice and it really puffs out and gives Grizzlor a wild, wooly appearance. 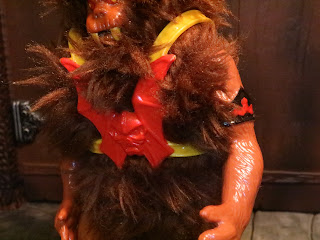 * Grizzlor is loud and proud about his support for the Horde. He's sporting a really cool Horde emblem on his harness along with a Horde armband and Horde themed boots. 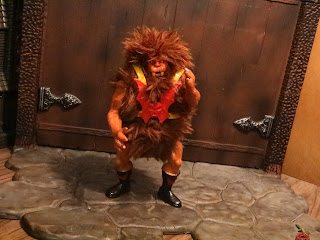 * Grizzlor is missing a head swivel and a waist swivel due to his furry body. He's not as articulated as most MOTU figures buy he's got the basic arms and legs and he's durable and fun to mess around with.
* I sadly don't have it anymore but Grizzlor originally included the minicomic "Grizzlor- The Legend Comes Alive." It's a fun story where Grizzlor is believed to be an urban myth and Buzz-Off tells campfire stories about the creature, not realizing that Grizzlor is stalking the heroes... 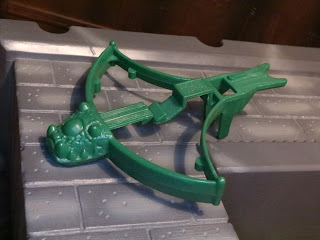 The Negatives:
* Grizzlor comes with one of the crossbows that all of the Horde came with (though in different colors and styles). I've never been a fan of these. They use the tension of the plastic bow to snap the little cyclops head forward to knock figures over. That's just not that impressive in my book. 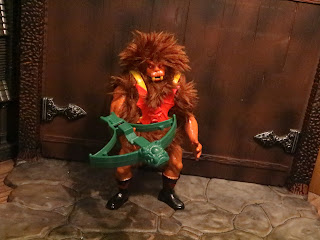 Grizzlor is absolutely one of my five favorite vintage MOTU characters and I'm still thrilled that I have my childhood Grizzlor in my collection. He's such a wonderfully strange figure and a great example of one of the crazy gimmicks that made the figures of the MOTU line stand out from the rest. So long as you keep Grizzlor out of the Slime Pit he's one of the best MOTU figures of them all. He's an Epic figure and well worth adding to your collection if you find his hair in good shape. Many Grizzlors did not survive the 1980s with good hair, so be picky when selecting your Grizzlor.

If you're a Grizzlor groupie then check out the alternate 200X Grizzlor head from the Heads of Eternia pack, the ReAction Grizzlor,  Grizzlor (Dark Variant), and Grizzlor (Toy Variant), the Grizzlor minifigure from the M.U.S.C.L.E. Trash Can Wave 4 (Slime), the POP! vinyl Grizzlor #40 and Grizzlor #40 (Flocked), and the Club Grayskull Grizzlor.