Minifigure Review: Skeletor & Panthor from Masters of the Universe by Mega Construx 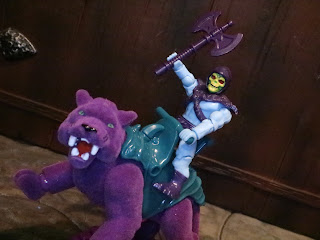 The Mega Construx Masters of the Universe line has really delivered far more product than I ever thought it would and it looks like 2021 is going to be a big year for it. 2020 had a few good releases, too, but 2021 feels like it could be the biggest year yet. It's starting off small, however, with this small set featuring Skeletor and Panthor. This is by no means the first Skeletor in the line (there have been multiple Skeletors) nor is it the first Panthor as he came with last year's Panthor at Point Dread set. What's the selling point of this set? For one reason, it seems like a more vintage toy accurate Skeletor is included here. For another, Panthor is flocked. Yes, flocked. Just like the vintage toy! Flocking Panthor is apparently a go to variant for companies putting out MOTU product currently and Mega Construx has now done it, too. Ready for a look at Skeletor and his malevolent feline? Then let's check these two out after the break... 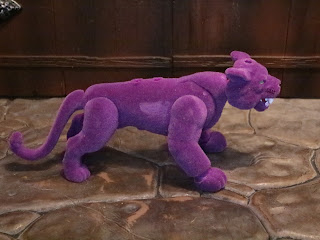 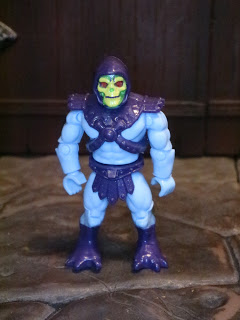 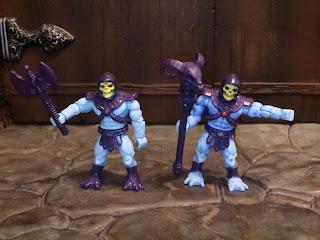 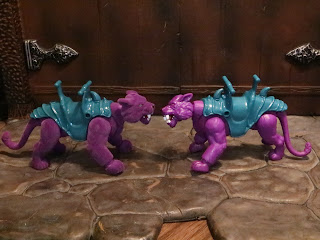 Comparison:
* On the left is the new flocked Panthor while the first release of Panthor included with the Panthor at Point Dread set is on the right. The only real difference here is that the Panthor I'm reviewing today is flocked. I love the look of him, though, as it really improves the overall look of the toy. 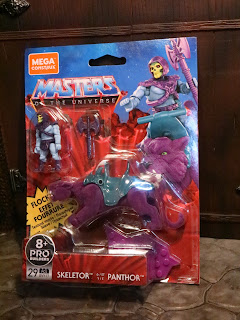 The Packaging:
* Like the individual figures or last year's He-Man VS. Beast Man set, Skeletor & Panthor come packaged on an individual blister card. I really like this look at it sets these apart from Lego who puts their individual figures and such in blind bags or in boxes. For Mega Construx the focus is clearly on the figures and this makes things really inviting for collectors. It's nice to see the toy you're buying. 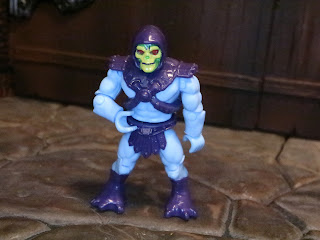 The Positives:
* I've reviewed this same sculpt of Skeletor many times so I'm mostly commenting on the paintwork here. I like the vintage toy style, especially the paintwork on the head. Mega Construx has consistently improved the paint on the faces and Skeletor's looks fantastic. The colors of the figure, while mostly not painted, also do a great job of capturing the vintage toy. It's cool that his armor and waist piece are separate pieces in this small scale as well. 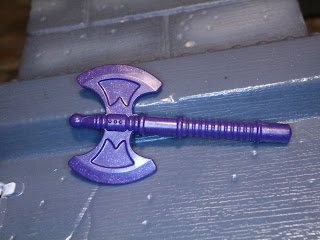 * Skeletor comes with the purple ax this time. It's the only accessory he has, which seems a bit slim, but it's still a nice piece. * Skeletor's articulation is excellent, especially for a minifigure. The Mega Construx guys are just such cool little toys with a great range of motion. 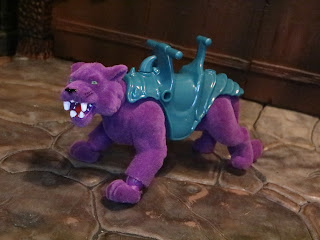 * Here's Panthor! I love this big, purple car and I love him even more now that he's fuzzy! Yes, this version of Panthor is flocked, just like the vintage toy. It's really nicely done and it looks wonderful. The color is perfect! 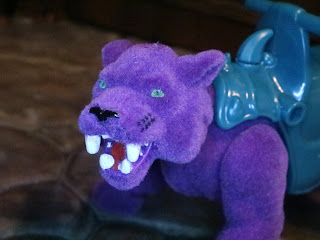 * Panthor's headsculpt looks really good flocked. Even more, I love the little paint apps he has. Check out his green eyes and his little black nose! Aww! He's such a cute kitty. I also like the little whiskers on his nose. And his massive, sharp teeth. Who's going to eat the Heroic Warriors for a treat and maybe even Mer-Man if he don't act right? Panthor, that's who! 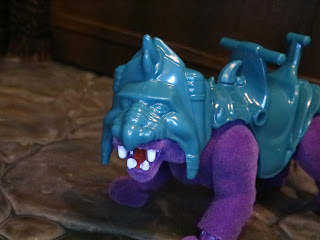 * Like the figure from Panthor at Point Dread, this Panthor comes with a helmet. While the vintage Panthor didn't have a helmet he was given one in the MOTUC release. That helmet was unique from Battle Cat's though, while this one is just Battle Cat's molded in the greenish color of Panthor's saddle. I really like it! It's a fun accessory and while I probably won't use it in my display it's fun to play around with when taking pictures. 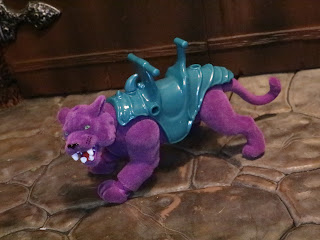 * Panthor has excellent articulation for his size and he looks fantastic with his saddle on. The sculpt is quite nice and there's a convenient bar for Skeletor to hang onto. 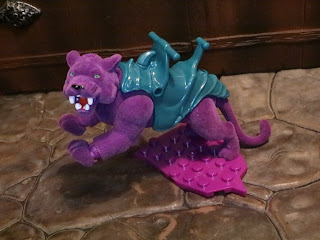 * Panthor also comes with an oversized display base so you can pose him in a leaping position up on his hind legs. He does have a peg hole on his belly, too, but there isn't a post or anything for him to rest on. 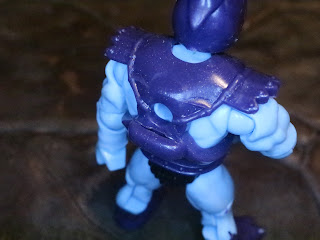 The Negatives:
* You know that providing a space for an accessory without including the accessory is one of my pet peeves so I just have to point out that Skeletor has the strap for his sword on his armor but he doesn't come with a sword. Ugh. 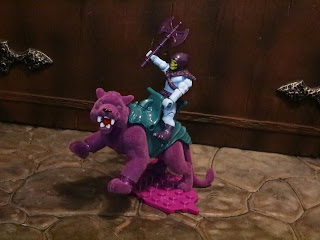 This little set might not offer anything truly new to the Masters of the Universe Mega Construx line but it does offer a better Panthor and the most vintage accurate Skeletor to date. Retailing around $15 dollars, the set seems like it might be a few bucks too high considering the lack of weapons for Skeletor. It would have been nice had he included all of his accessories. If you're a casual collector of this line you could definitely skip this one although fans and those just wanting a Skeletor and Panthor very well may prefer this pack. It's a Good and a 1/2 set and it's cool to see it hanging on the shelves at retail with it's bold colors. A skull faced villain riding a purple cat never goes out of style!