The Dawn of 31 Days of Toy Terror: Optikk from He-Man by Mattel 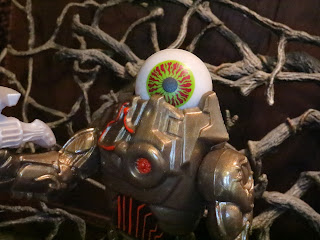 Another Masters of the Universe figure showing up during a 31 Days of Toy Terror countdown? I bet you're just shocked, aren't you? It's no surprise that Masters of the Universe is pretty much my favorite thing ever and today I'm taking a look at a figure from the 1989 "He-Man goes to space" based toyline" released by Mattel as a successor to the original MOTU series. Simply called "He-Man" (often referred to as The New Adventures of He-Man due to the title of the cartoon series) the line had a very different aesthetic and introduced lots of crazy Space Mutants into the mix. Today I'm checking out Optikk from series 2! He's an incredible looking figure that appears to be a giant eyeball in an armored spacesuit. Can you dig it? Of course you can! Let's check out this creepy guy after the break... 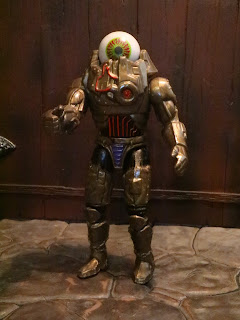 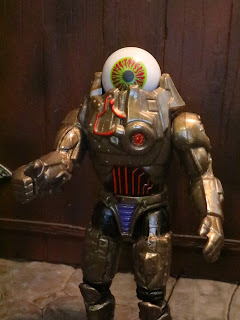 * Optikk is an awesome looking figure that really catches your eye (pun intended). The He-Man line had a few truly unusual figures in it but Optikk definitely stands out the most. He really does have a fantastic sculpt that's loaded with detail. I've always imagined that Optikk's main body is the giant eye on his head and that he has some sort of tentacles that extend down into the suit, which he controls like a robot. The armor looks like it is covered with various added on metal panels and has a voice box of sorts on the chest. He really is a fantastic figure. 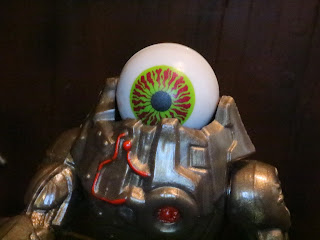 * His head is just a giant eyeball! It's very odd and unsettling. The paintwork on the iris and pupil is quite nice and really adds to the unsettling feel of the figure. Optikk is always watching you. Always. 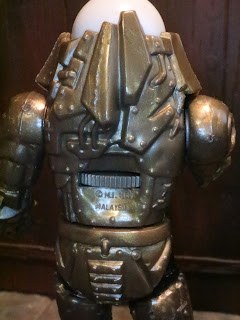 * Optikk has a dial on his back. What does it do? Move it left or right and his eye also rotates left or right, around him to track his opponents. Pretty cool, huh? It's unintrusive and works really well. 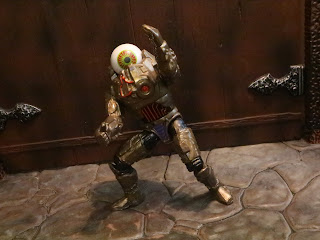 * Despite being just an eye guy, Optikk features the articulation pattern of most figures in the line: You've got swivel hinge knees and hips, swivel shoulders, and the swiveling eye controlled by the dial on his back. The right arm has a spring action feature, which causes it to spring up when you pull it down. 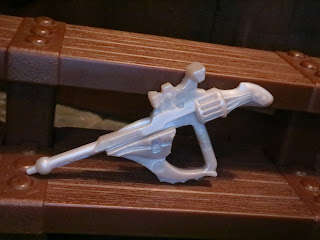 * Optikk's Photon Neutralizer is a really well designed laser rifle. He can hold the rifle just fine in his right hand. The gun has an unusual looking scope on top, a handguard with some sort of ridges on the bottom. Maybe they're for melee combat? 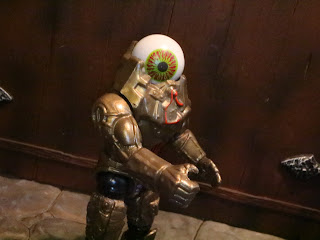 The Negatives:
* My only negative is that Optikk's spring activated arm pretty much means he is always going to be posed with his right arm stretched out. 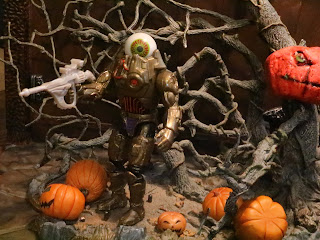 Optikk is definitely the figure most people recognize from Mattel's He-Man/ New Adventures line and it's because of his unique design. Optikk really is a cool figure. Despite the line being overall largely forgotten, his popularity is apparent in that Mattel picked him as the first New Adventures figure to be remade in Masters of the Universe Classics. He's a Great figure and definitely one of the highlights of the line, unless eyeballs creep you out. They definitely freak out some folks for sure. Keep an "eye" on Action Figure Barbecue this Halloween season as I've got more spooky toys coming soon...

If Optikk caught your eye check out my review of the Masters of the Universe Classics Optikk.