The Dawn of 31 Days of Toy Terror: Sam with Pumpkin & Sack #1002 from Trick 'r Treat from POP! Movies by Funko 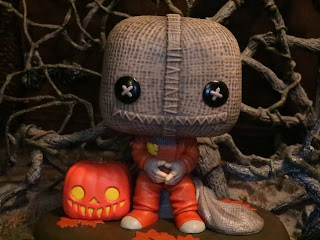 Happy Halloween! We made it! Another 31 Days of Toy Terror is in the books! I hope you've had a wonderfully spooky season and that the rest of your Halloween is equally as fun as it is terrifying. Remember what Sheriff Brackett said in Halloween: "I guess everyone's entitled to one good scare" For this Halloween installment of The Dawn of 31 Days of Toy Terror I've deviated again from this year's focus on horror toys from before the year 2000 to check out something that's new: The Spirit exclusive Sam with Pumpkin & Sack #1002 from Funko's POP Movies. Based on the only Halloween movie that out-Halloweens Halloween this POP! vinyl from Trick 'r Treat has been part of my indoor Halloween display this year. Sam is a wonderfully delightful character and in my book he's one of the Halloween kings and queens (Along with Michael Myers, Jack Skellington, Elvira, the Sanderson Sisters, and David S. Pumpkins). It's been quite a few years since Funko last released Sam so it's nice to see him in POP! form again. Let's check out the arbiter of the rules of Halloween after the break... 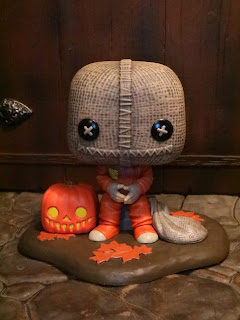 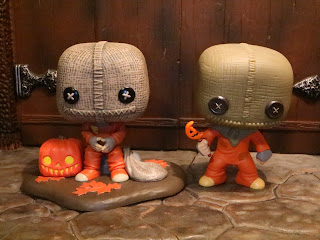 Comparison:
* On the left is the new Spirit exclusive Sam with Pumpkin & Sack #1002 while the original Sam #57 (from 2014) is on the right. Looking at these two really gives you some perspective on ho Funko's design and style of this line has changed. Sam is a great example of the classic early POP! design while the new Sam shows off how much more intricate the newer sculpts are. 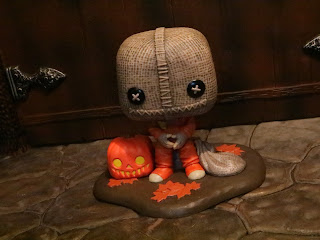 The Positives:
* You might consider Sam a bit of a deluxe POP! vinyl as he's presented with a small display base. Nothing is removable or anything but it does make for a nice diorama scene rather than just a single figure standing around. It's still rather simplified but little details like the leaves on the base and the bag resting flat on the ground help to give the scene some mood, something hard to accomplish with a single figure. 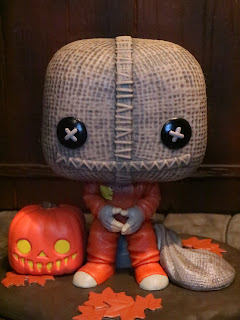 * The detail on Sam's costume is much improved from the previous Sam POP! vinyl as there are more pouches and more realistic folds in his jammies. He's also sitting this time, which suits the character. He sometimes just likes to sit back and take in the sights and sounds of Halloween night! 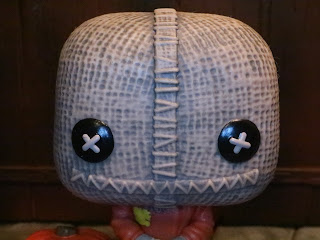 * The headsculpt is way better, too. The details of Sam's burlap mask look pretty cool with lots of stitched details and a dark paint wash to add to the textured sculpt. 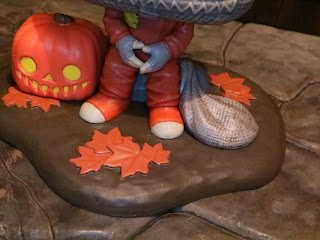 * Sam's base is covered in cool little patches of leaves. He's also toting his mysterious trick 'r treat bag. What does he have in there? Presumably some candy but probably lots of stuff you'd rather not know about, too. 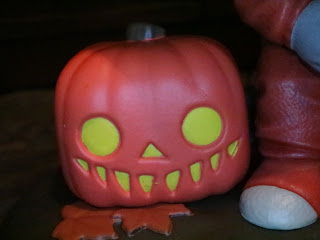 * I love the POP! styled jack o' lantern! He looks so friendly! Does Funko ever do POP! vinyls that light up? This one have been a really cool candidate for one. 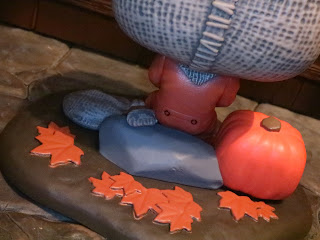 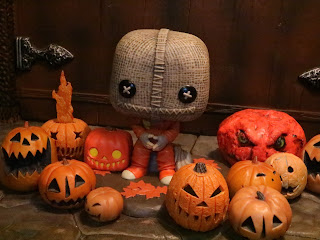 I love Trick 'r Treat! Even though it's a more recent film (made in 2007 but actually give a wide direct to video release in 2009, which is when I saw it first) it feels incredibly nostalgic. My friend and former podcasting co-host Andrew called "Goosebumps for adults" and I think that's an apt description for it. Trick 'r Treat captures so many different aspects of Halloween and appeals to a pretty wide audience. Plus, Sam is an adorably creepy character who has really become a horror icon. I wonder how many people recognize him who haven't even seen the film? This is a Great POP! vinyl of Sam and a proud new addition to my pumpkin collection. Have a Happy Halloween!

For more POP! Movies vinyls check out the following:
Danny Torrance #458 from The Shining
Dr. Ian Malcom #552 from Jurassic Park
Gage & Church #729 from Pet Sematary
Harold #846 from Scary Stories to Tell in the Dark
Jack Torrance #456 from The Shining
Michael Myers #03 from Halloween
Norman Bates #466 from Psycho
Pennywise #55 from It
Pennywise (with Beaver Hat) #779 from It: Chapter Two
Sam #57 from Trick 'r Treat