The Dawn of 31 Days of Toy Terror: Yummy Mummy from Vinyl SODA by Funko 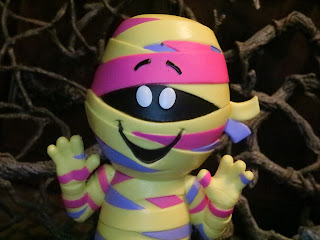 Back in 2013 General Mills re-released Fruity Yummy Mummy and in my review of the cereal I declared it as my favorite cereal of all time. Fruity Yummy Mummy was amazing. Well, the 2013 reboot of it was, anyways. The original Fruity Yummy Mummy cereal was released during the 1988 Halloween season and was actually just repackaged Fruit Brute cereal with vanilla marshmallows instead of Fruit Brute's lime flavored marshmallows. Anyways, when General Mills brought all of the Monster Cereals back for Halloween 2013 they gave Fruity Yummy Mummy his own unique flavor: Orange cream. It was incredible and I really hope they bring it back next Halloween! Now, all of that is simply to give you some background on the Yummy Mummy Vinyl SODA who Funko released as a WonderCon 2020 exclusive and sold online only. Like many of the other Vinyl SODA figures there is a variant as well with the Yummy Mummy in green, orange, and pink. This is the traditional version, though, and the one I want on my shelf. Let's take a look at the Yummy Mummy after the break... 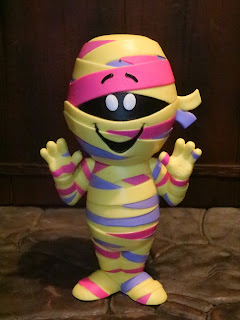 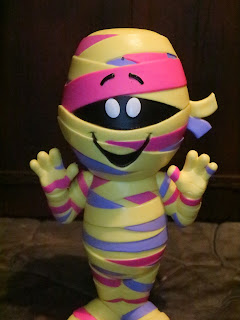 The Positives:
* While he clearly has the best cereal, the Yummy Mummy isn't my favorite of the breakfast crew. Still, Funko did a fantastic job on him. The simple, stylized look of these figures really matches the General Mills cereal monsters quite well. Yummy Mummy is very colorful and his mummy wrappings are actually sculpted on rather than being simple paint applications. It's really quite nice, especially for a figure in this style. He's also posed as if he's in the middle of posing eerily over a giant bowl of cereal, saying "Ooohhh! The frightening flavor of dreadful dreamsicle!" 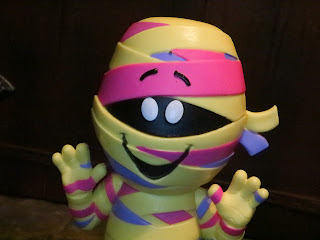 * The headsculpt is just as nice as the rest of the figure. While you usually can't see much of a mummy's face underneath it's bandages Funko gave Yummy Mummy cartoon-like eyebrows an a big grin that appear over the bandages. I also like his mysterious white eyes! 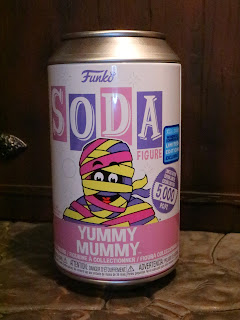 *  I absolutely love the cans these come in! The soda can design is so incredibly cool and makes for a rather unique display piece on a shelf next to he figure. I'd be down for some Fruity Yummy Mummy soda if it were a thing. I'm guessing it would be a dreamsicle, kind of like Stewart's Orange 'n Cream or Tommyknockers Orange Creme. The can shows off the Yummy Mummy and displays all of the expected labels and legal info, as well as the edition size. The top of the can separates so you could use the can to store trinkets as well, and it's even sculpted to look like the top of a soda can. It's made from a much more durable metal than your average soda can, too, so it's quite a nice collectible. 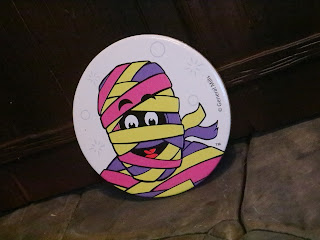 *  Inside the can is a round, sturdy cardboard disc. It's kind of like a POG, though a bit larger. On the front is the Yummy Mummy while the back has the figure's name and the run amount listed (4,200). 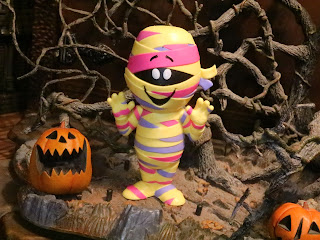 Character wise, Yummy Mummy might be my least favorite of the cereal monsters. Fruit Brute is without a doubt my favorite, followed by Boo Berry and then Count Chocula (which is my least favorite of the cereals). Yummy Mummy and Franken Berry are at the bottom of the lost. Still, Yummy Mummy isn't a bad vinyl by any means. I'm still giving him a Good and a 1/2. I've almost completed my set although Funko released Boo Berry a couple weeks ago in a lower edition size, so now it's once again difficult to complete a set of these. Sheesh, Funko. Way to ruin a good thing.
If you're a Fruity Yummy Mummy fan check out my review of the 2013 release of the cereal.
For more reviews from the Vinyl SODA Ad Icons check out the following:
Fruit Brute