The Dawn of 31 Days of Toy Terror: Peter Venkman and Grabber Ghost from Ghostbusters Kenner Classics by Hasbro 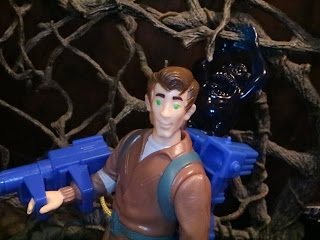 Welcome back to 31 Days of Toy Terror! This is the eighth year of 31 Days of Toy terror and this year we're looking at nostalgic horror toys, either from before the year 2000 or based on things from before the year 2000! This year I actually started working on this project in July as it takes quite a bit of time to work on 31 reviews and I don't want to spend all of October working on reviews. As I'm writing this first review on July 4th, 2020, I have to admit that I have no idea what Halloween 2020 is going to look like. So many of the things we typically associate with the holiday and the months leading up to it like fall carnivals, haunted houses, going to a movie theater to watch a new horror flick, getting together with friends to watch the classics, and even Trick 'r Treating are up in the air this year. We are going to have to pull our heads together to figure out how we'll celebrate the spookiest of times this year! I hope my simple gift to you of looking at some (often slightly) spooky action figures gives you at least a daily dose of Halloween fun every day this month. We're going to make it though this, everyone! Now... on to the show...

One of my first ever articles back on The Epic Review was a look at the G.I. Joe: A Real American Hero General Hawk v2 from 1986 where I looked at what I believe was one of the first action figures I ever owned. There's another figure that would be one of the earliest toys I ever owned as well, probably at least in the first five, and it was Peter Venkman from Kenner's The Real Ghostbusters toyline. I remember being in a store and seeing the Ghostbusters figures on the shelves and just being floored. The oversized purple backer card, the cartoonish art on the top, and the translucent plastic ghost figure just seemed magical. Peter Venkman was the first figure I picked out and I remember my dad buying him for me. Did Ghostbusters help start my lifelong love of all things spooky? Maybe! So let's kick things off with a look at Hasbro's remake of Peter Venkman and Grabber Ghost from earlier this year. I've reviewed a few of the other figures previously but I've been sitting on Peter Venkman for around 4 months to kick this month off right! Let's truly kick off The Dawn of 31 Days of Toy Terror after the break... 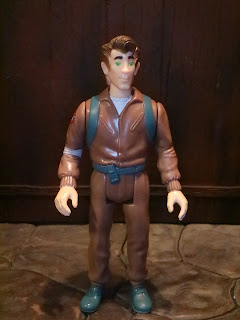 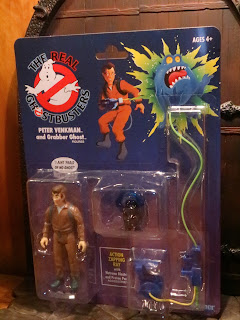 
* The packaging for this line looks fantastic and is a pretty faithful recreation of Kenner's vintage packaging. The cardboard backer is pretty sturdy for those of you wanting to keep a set MOC and the colors are bright and vibrant, just like I remember as a kid. While the Hasbro logo is on the package, it's on the back. The front and back both have the vintage Kenner logo. That art of Peter busting the Grabber ghost is just awesome, isn't it? 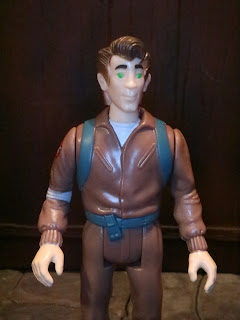 
* Hasbro did a pretty admirable job of recreating these figures. Remember that while this toy was released in 2020 it's a recreation of a toy that's now 34 years old, so try to look at it through that lens. Like the other Ghostbusters Peter is wearing a jumpsuit, though his is dark brown. My parents actually made me a Ghostbusters costume in this color as a kid since Peter was my favorite. The suit has quite a few cool details such as the breast-pockets, the elastic cuffs, and the straps for the Proton Pack. Pete also has a walkie-talkie on his belt for keeping in touch with the rest of the team. 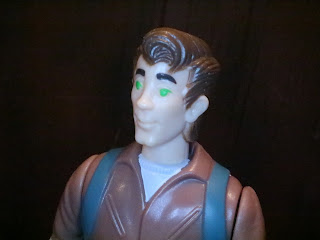 * The headsculpts seem fairly accurate to the original toys although there are definitely some minor differences. While the animated Peter's likeness looks nothing like Bill Murray (the personality of the character was definitely closer to Murray, though). Originally voiced by Lorenzo Music, Peter was later replaced by Dave Coulier after Bill Murray allegedly complained that Peter sounded too much like Garfield the cat. Of course, Murray would later go on to voice Garfield, which was apparently one of his biggest regrets. 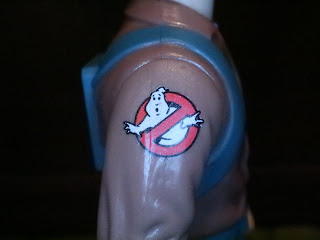 *  The Ghostbusters logo on Peter's right shoulder is very neat and clean. It looks fantastic and helps bring the team together as a cohesive unit. 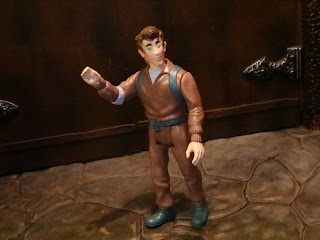 * In the 1980s and through the mid-late 1990s Kenner took the 5 points of articulation style of the vintage Star Wars line, made the figures larger, and used this combination for dozens of movie and cartoon based toylines. I certainly could be missing something but I think this might have been one of Kenner's first 5 inch scaled lines, if not their first. The overall feel of this remade figure is excellent. Honestly, if I didn't know, I'd probably not realize this was a remake if someone just handed me the toy. 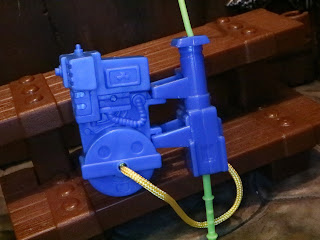 * The Proton Packs really are pretty cool in this line and nicely capture what we saw in The Real Ghostbusters. There's a nice bit of detail here. The Neutrino Wand (Kenner called it a Nutrona Blaster) is attached via a yellow cord, which I love. It's a string so it won't bend or break over time. The Neutrino Wand fits securely on the backpack, though the stream isn't detachable so it makes toting the pack around weird. The pack plugs into the back of the figure with a sturdier plug than the vintage toy and it stays on quite well. 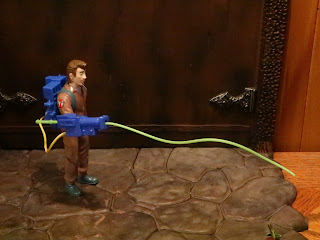 * To further give each figure their own unique feel Kenner gave each Ghostbuster a differently colored particle stream (Peter's is Green!). Kenner called these zapping rays and they can actually be spun and wiggled by turning the yellow handle at the back of the Neutrino Wand. It is a pretty cool play feature and I remember being amazed by these as a kid. They seemed really unique and magical back then! 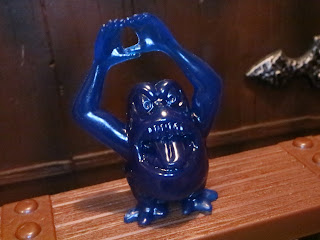 * The Grabber Ghost is awesome! I love the ghosts in this toyline and since the vintage ones have become popular among minifigure collectors too, they can be tough to track down. Grabber Ghost looks like a blue raspberry gummy candy (delicious!) and has a fun sculpt showing off his large mouth and slimy tongue. He's also got his arms extended and you can have him grab onto the next, arm, or leg of any of the figures! 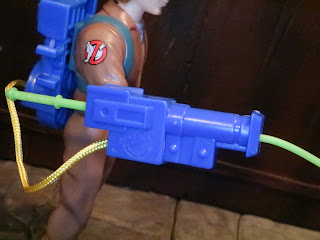 * This problem is more of a problem with the vintage design rather than a problem with Hasbro's remake, but it's still here: I've never liked the fact that the streams are not removable. Plus, they have always been very, very fragile. Seriously, these things can bend and break easily, so be careful! These feel a bit more durable and collectors should be fine, but watch out if you're giving these to a child. 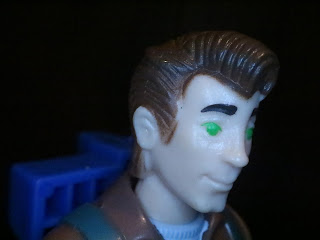 * There aren't a lot of paint applications on the headsculpts in this line, which is fine since they're recreations of vintage toys, but that makes the problems stand out all the more. peter is missing paint on his hairline. Maybe they were trying to capture Bill Murray's incredibly unusual and awesome hair? No, probably, not; these figures have had some sloppy quality control, especially in regards to paint. 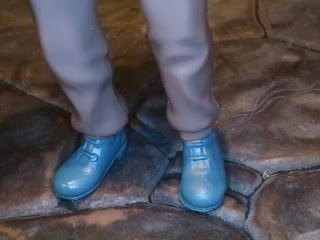 * There is a lot of random paint slop on these guys. It might be hard to see in this picture but there is paint slop all over Peter's left boot (on the right here) and the cuffs of his uniform. I'm not sure if Hasbro tried to rush these into production or if they just figures details like this wouldn't matter since they're "retro" toys. 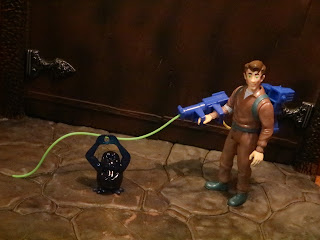 Peter Venkman is definitely my favorite figure from Kenner's original The Real Ghostbusters line but Hasbro's re-release is definitely a bit weaker than the rest. He's not terrible, and is still a Good and a 1/2 figure, but there are just lots of little sloppy paint errors that make this guy feel less satisfying than he should. Still, I have tremendous nostalgia for this figure. Don't we all wish we could be as cool and witty as Pete Venkman when faced with something absolutely terrifying? He's a guy who gets things done! This might not be the scariest toy available this year but it definitely brings back some good memories!