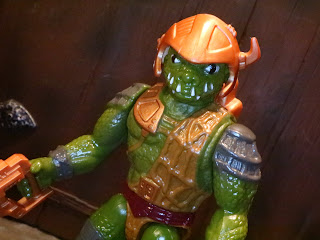 Overall the designs of the Evil Mutants in Mattel's He-Man line (aka New Adventures) were quite strong (with the exception of Karatti, who is pretty dull) and probably would have been a huge hit if they had been introduced as a new faction in the vintage Masters of the Universe rather than a completely different toyline. Today I'm checking out Lizorr, the "cold-blooded goon squad mutant from the burning Gorn desert on evil planet Denebria." Lizorr was released as part of the second series of figures in 1990 and was a bit less common among North American collectors as he was apparently only released in the UK until later in the line. Lizorr never got much screen time on Jetlag's The New Adventures of He-Man cartoon series nor did he make many comic appearances. That's disappointing as he's a pretty cool looking lizard warrior. Let's check out Lizorr as part of our JuNe Adventures festivities at Action Figure Barbecue! 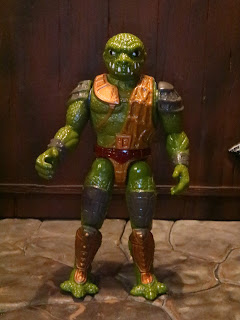 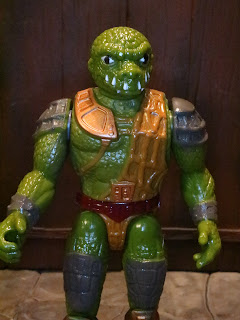 * Lizorr is a lizard-like warrior who kind of resembles the Gorn from Star Trek. Heck, he's actually from the Gorn Desert (referenced on his bio) so he's definitely an homage to the classic sci-fi villain. He has a great reptilian skin texture and he's covered with bits of armor that feature an aesthetic both primitive and sci-fi. I like it. He looks like a villain who would be features in a film riffed on in a Mystery Science Theater 3000 episode, and that's praise for sure. The sculpt is really nice. Mattel did some really nice work on this line at times and it's always sad it wasn't as appreciated as it deserved to be. 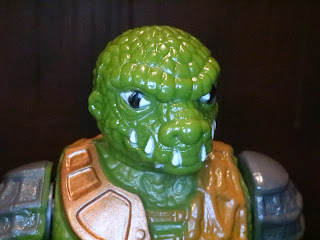 * The headsculpt is petty cool. He's got some massive nostrils, reptilian eyes, sharp teeth poking out of his mouth, and a great skin texture. 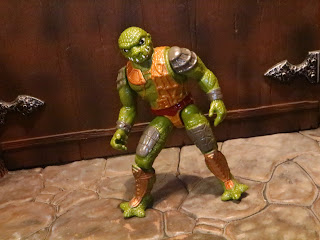 * Overall Lizorr features the articulation pattern of most figures in the line: You've got swivel hinge knees and hips, a swivel neck, a limited swivel waist (for some reason he won't rotate all the way around), and swivel shoulders. The right arm has a swivel action feature, which I'll cover next! 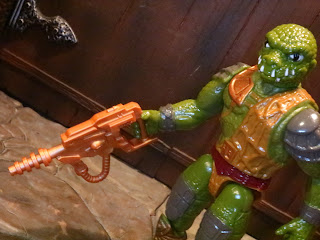 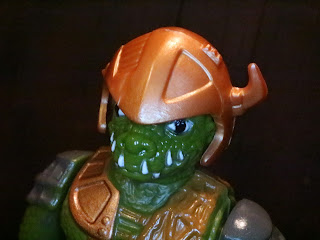 * Lizorr has a bronze helmet that reminds me quite a bit of He-Man's helmet. It has a very "retro-futuristic" look to it and it stays on his head quite nicely. It's also covered with various panels and some sort of hooked blade on the left side. 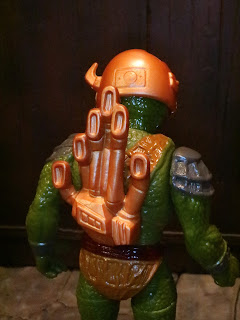 * Lizorr also has a backpack that's referred to as a climate control pack. From looking at it, I kind of wonder if it actually pumps out heat and moisture to make every environment hot and humid for him. It plugs into the holes on his back and actually looks pretty cool. Seeing the great details on this guy really makes me wish we had gotten the chance to see Lizorr in Masters of the Universe Classics. the Four Horsemen would have knocked this guy out of the park! 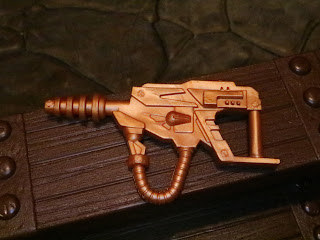 * Lizorr also has this really cool gun. I love this thing! It doesn't appear to have a melee weapon attached (like most of the other Evil Mutants' weapons do) but it has some cool sculpting and a nice bronze color to match the other accessories. Lizorr holds it securely in his right hand and it really completes his look. 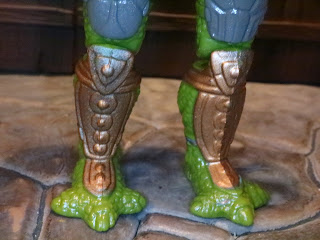 * Lizorr's shin pads have some missing paint on them. This isn't wear and tear, by the way; I actually got a carded Lizorr and opened him (I couldn't find a loose complete one and I found one cheap) but these shin guards all have a bit of a messy paint job. 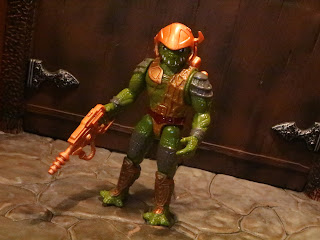 Lizorr is another stellar figure in the He-Man line. I love this alien brute! He's got an excellent sculpt, a cool design, a fun action feature, and a few well made accessories. What more could you ask for? Lizorr is definitely one of the standouts in the He-Man overall and is well worth your attention if you're just skimming this line and picking out the best figures. It's really a bummer that we didn't see Lizorr in Masters of the Universe Classics as he would have made a killer figure. This original toy is quite nice, though, and is easily a Great and a 1/2 figure.