The Dawn of 31 Days of Toy Terror: Ash from Toony Terrors by NECA 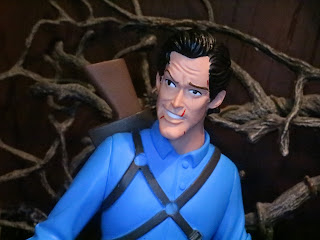 Today is Saturday, so here is another review that breaks the rules of The Dawn of 31 Days of Toy Terror's focus on "horror" toys made before the year 2000, but I think it still fits the spirit of the theme. Today we're checking out the Toony Terrors version of Ash Williams from 1987's Evil Dead II: Dead by Dawn and I'm going to lay out the case for why Ash belongs in this year's 31 Days of Toy Terror for all of you primitive screw-heads, so listen up! First, while this is a figure from 2020 it's based on a movie from 1987. Second, Ash was a figure that fans wanted to see for quite a few years before McFarlane Toys released him as part of the third series of Movie Maniacs in 2000. I first became familiar with The Evil Dead through ToyFare magazine (a formative part of my middle school and high school years) and I tracked the movies down, thus ingraining myself into the legions of fans wanting a plastic Bruce Campbell toy. Lastly, NECA's Toony Terrors line is intended to evoke nostalgic feelings by imagining famous horror icons as traditional Saturday morning cartoon characters. Does that work for you? Groovy! Then let's get things rolling after the break with a look at the Toony Terrors Ash... 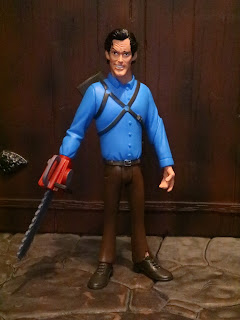 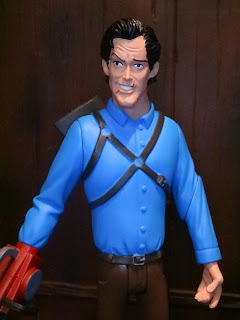 * The intention of the Toony Terrors line is to depict horror icons in the style of 1980s and early 1990s Saturday morning cartoons, and I think Ash is another home run. NECA did a great job of simplifying Ash's outfit to feel like something that could be animated. Not that Ash's costume is overly complicated but it looks very neat here with minimal rips and tears, which would be challenging to animate over and over (though he does have a ripped left pant cuff). The paintwork is quite clean and the bold, solid colors further sell the cartoon aesthetic. While I don't collect every figure in this line I love the overall theme and I'm compelled to pick up the toys of the characters I like. 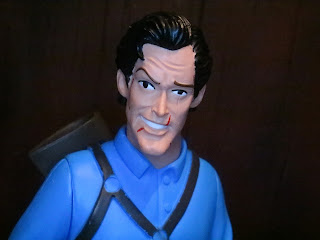 * I really like this Bruce Campbell portrait! Cereal Geek magazine did a really cool series of articles in their magazine where they would imagine popular movies and TV shows as cartoon characters. While I don't believe they ever covered The Evil Dead (they usually did stuff that would have truly worked as a kids show), this very animated Ash portrait reminds me of that method of stylizing a character. The hair and chin make him instantly recognizable while the cocked eyebrow and cocky grin definitely convey Ash's personality. 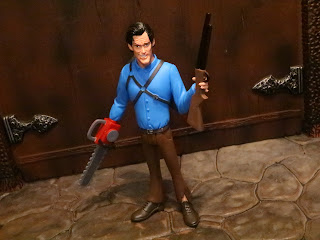 * These figures aren't super articulated by any means but they do have a bit more than your standard five points of articulation. They really do remind me of older toys from the mid-90s, though, as Ash does have joints like swivel wrists, a swivel elbow (haven't seen one of those for a while), and a baljointed head. There's enough joints here to craft a bit of a pose for when the figure is on display, which is the intention of this line. They're more for display than play, though they do feel quite durable. 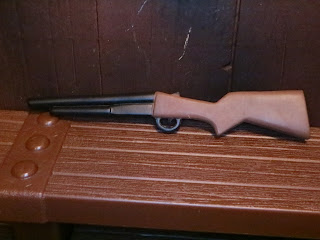 * Ash is never far from his chainsaw or his boomstick. Fortunately NECA gave him both! His shotgun has a sawed off barrel, a bit of a simpler, more cartoon friendly appearance, and it fits nicely in Ash's left hand. 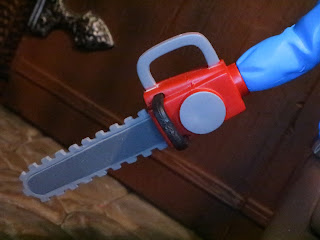 * Ash's right hand is, of course, a chainsaw. It's perfect for whenever you need to carve up some deadites! The design is a bit simple but, again, it looks like what you might expect an animated chainsaw to look like. 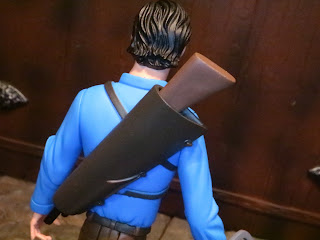 * Ash's shotgun can store in the holster on his back in case you want to pose him with just his chainsaw. The holster can pivot, so you can position it on whatever side of his shoulders you want it on, and it does a nice job of keeping the shotgun secure. 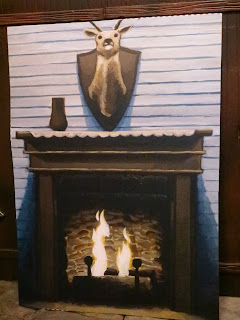 * Ash comes with a cardboard backdrop that you actually cut out from the back of the package. It shows off the fireplace from the Knowby cabin, complete with the deer head mounted above it. The design definitely looks like it could be the static background from a cartoon. These are kind of a fun touch that remind me of the cardboard backdrops that came with various toylines of the late 80s and early 90s, such as Monster Force. 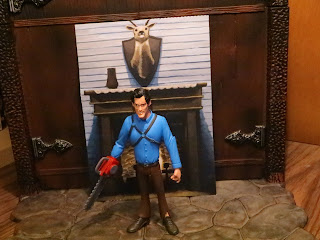 * The cardboard backdrop ends up looking kind of weird just sitting behind the figure without a stand. I wish Ash had a base this could clip onto, or perhaps if it were a separate piece packaged with the figure that folded down and made a diorama like base with a small floor section. 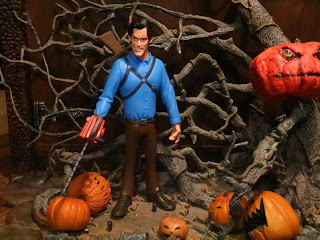 Ash is the man! NECA did a great job of capturing Ash in an animated style and he makes a nice foil for the characters who make up the rest of the line. They're all villains but I do believe Ash can take them. He's going to look awesome posed alongside of them. Ash is a Great and a 1/2 figure and another cool piece for collectors of Toony Terrors or just a fun Ash for fans of The Evil Dead series. There is a bloody Ash variant coming out in the future, so keep that in mind. It's the same sculpt but slathered in blood. Groovy.


The forces of evil fear Ash Williams! Keep them afraid by checking out all of my Ash reviews: The Cult Classics S-Mart Ash, the Evil Dead II Deadite Ash and Hero Ash, and the Hero Ash update from the 2-pack with Evil Ed, and the One:12 Collective Ash.