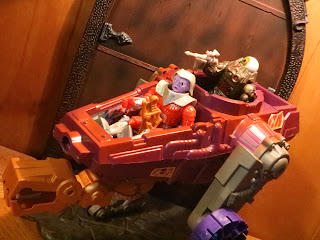 It's time for the first review for JuNe Adventures and today I'm going big with a review of the Terroclaw from the first series of He-Man toys. Known as the Terrapod in Europe (and often misspelled as Terrorclaw rather than Terroclaw across the internet), the Terroclaw was the largest vehicle for the Evil Space Mutants released in the first series of toys. Billed as "3 Attack Tanks in One!," the key feature of the Terroclaw is that has a limited ability to convert into three different battle modes by repositioning the legs and body of the vehicle. The first series vehicles also featured compatible ports which allowed for various docking options between the ships and thus another selling of the Terroclaw was that the Dreadwing/ Shuttle Pod could attach on to it to create an even more fearsome vehicle. Let's take a look at the Terroclaw after the break and see all of the features it sports in fighting the Galactic Guardians and waging war on Primus! 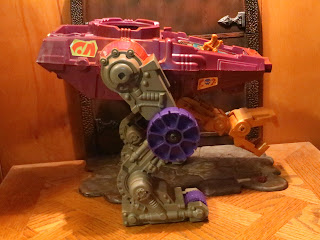 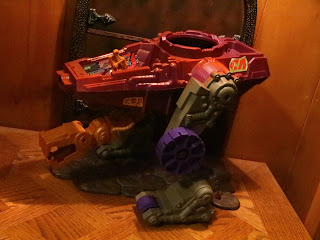 * The Terroclaw is quite a large vehicle and it introduces a cool mech-like vehicle to the Masters of the Universe franchise. It's an impressively designed bipedal tank with some interesting color choices and articulated legs. There's also room for at least two figures with a cockpit in the front and a protected porthole in the back. 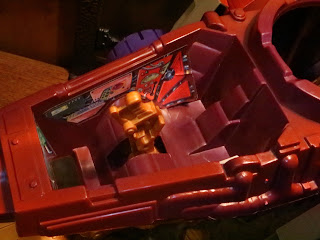 * The main cockpit is fairly deep and will hold most of the He-Man villains from early in the line. The stickers are nice and sport a lot of detail (though whoever originally owned this vehicle put them on backwards). There's also a large gold control stick in the middle of the cockpit. What's that for? I'm glad you asked! 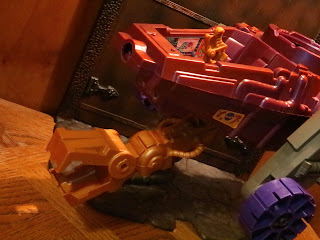 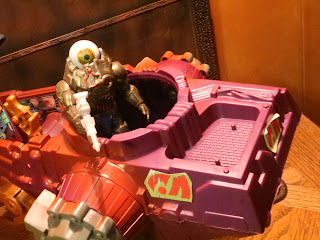 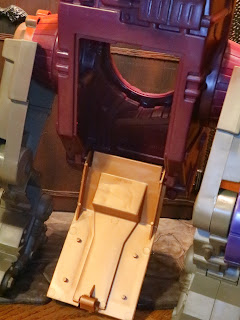 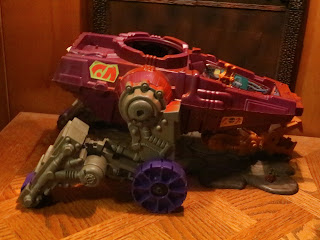 * The second form of the Terroclaw is a more tank-like vehicle. The legs click into place (they make a loud clicking sound when you move them)so that the wheels on the "knees" and "feet" of the vehicle rest on the ground, allowing the Terroclaw to roll while balancing the main body. I presume this would move faster than the Terroclaw in walking mode though the packaging indicates that this is designed for stealth attacks. 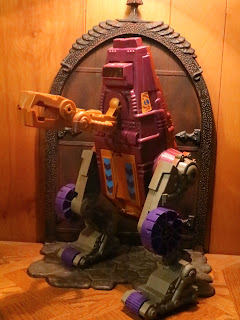 * The third mode is called an "upright robotic shield" and it involves the legs being positioned upright and the body tilted up with the armored undercarriage facing forward. This is a pretty impressive looking mode for the toy though it would be better with a gun turret of sorts. 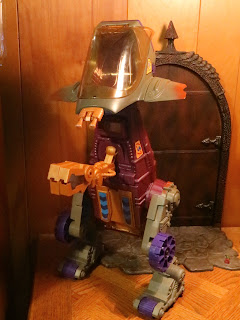 * Remember how back in the opening paragraph I mentioned that the first series of He-Man vehicles features the ability to interconnect? Well, the Terroclaw is designed to connect with the Shuttle Pod. In fact, it can actually fit onto the vehicle in two different ways! First up, the Shuttle Pod can fit on top of the Terroclaw when it's robotic shield mode which allows it to function like an armored turret since the ship is armed with laser cannons. This is actually pretty cool looking and seems like it could be useful for setting up a defensive position against the Galactic Guardians. 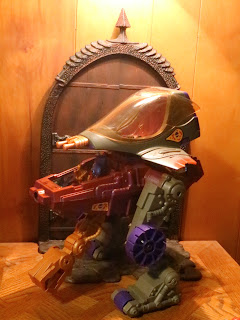 * The second place the Shuttle Pod can attach is on the rear of the Terroclaw when it's in both tank mode and mech mode. In this configuration, it seems more like the Shuttle Pod might be the main cockpit while the Terroclaw's standard cockpit is for support fictions. This is also the most stable configuration and might end up being how I display this in my collection. Of course, you can still use the hatch on the bottom to place a figure inside the main housing, kind of like an armored troop transport. For one troop, I guess. 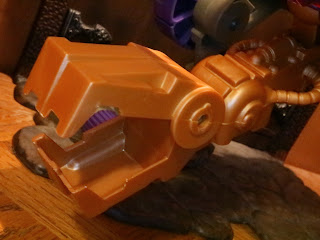 
* The capture claw is quite cool but I wish the control handle in the cockpit actually could control its opening and closing functions as well. Instead, you have to manually open and close the claw. 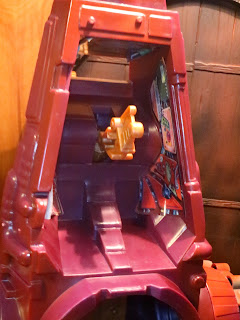 * It's cool hot the little slit in the base of the cockpit becomes a small viewing window when the Terroclaw is in "robotic shield mode" and it looks great from the front, but from the back? How exactly do you put a figure on here? They just kind of slip off. 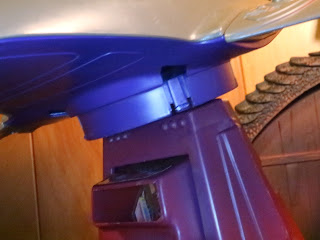 * The Shuttle Pod stays on securely when attached in tank mode or mech mode but when it attaches to the top of the cockpit in "robotic shield mode" it hangs on quite loosely. It feels like if you move the vehicle at all the Shuttle Pod will just come tumbling off! Definitely not a great way to display this one, especially if you're putting it higher off the ground! 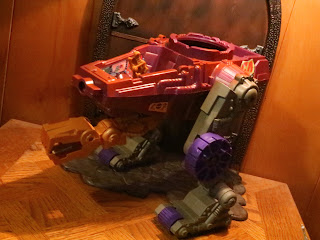 The Terroclaw is a rather interesting vehicle that has some cool functions. I love the multiple attack modes and while they're not drastic reconfigurations or all that well thought out, they do provide a lot of play value. The ability to connect to another vehicle like Shuttle Pod is also pretty slick, though I don't think Mattel uses this feature on the He-Man vehicles after series 1. The design is fun and it seems like it easily could have been a vehicle from later in the MOTU line though it is lacking in some firepower. Having a laser cannon on the front or on the rear turret would have been fantastic. It's a Good and a 1/2 vehicle that adds some heft to the Space Mutant forces.