Hey everyone! Guess what? We are officially in October 2020 and The Dawn of 31 Days of Toy Terror has started! Since 2020 has been absolutely crazy and unsettling I decided to go with something warm, nostalgic, and terrifying. That's why the focus of The Dawn of 31 Days of Toy Terror is on toys from prior to the year 2000 with a few cheats in there for fun. Yeah, I kicked things off with Peter Venkman from Hasbro's Ghostbusters Kenner Classics, a line that came out this year, but they're clearly just remakes of the old Kenner Ghostbusters I had as a kid. There are truly lots of vintage gems in there, though, and I really hope you enjoy the heck out of it! For more great stuff also check out the Countdown to Halloween blog! They're the hosts with the most, babe. 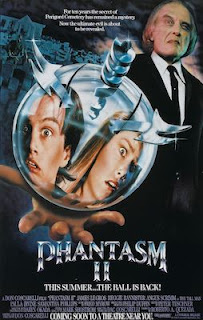 I had the chance to watch a couple of spooky movies over the past week, one of which was Phantasm II. Don Coscarelli's 1988 sequel to the 1979 original has a bigger budget, more outrageous effects, faster pacing, and is actually a better movie than the original. It's not quite as surreal and dreamlike as the first film but it makes up for it with some pretty frightening stuff. Phantasm II also takes some cues from the splat-stick style of Sam Raimi's Evil Dead series, even giving Raimi a shoutout in one scene. Angus Scrimm is back as the Tall Man and Reggie Banister is back as Reggie, the former ice cream man turned monster hunter who now uses a homemade quad-barreled shotgun. I really like how this movie puts Reggie and Mike on the offensive as they're tracking the Tall Man with their homemade weaponry through increasingly desolate small towns. It's a good sequel that keeps what works about the original but moves the story forward. The practical effects are excellent, too. There's some great, gruesome stuff here! 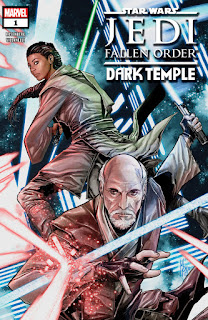 The TPB of Star Wars: Jedi: Fallen Order- Dark Temple came out on September 15th and I finally sat down to read it last week. I really loved last year's video game Jedi: Fallen Order and while this miniseries was released monthly last fall, I still held off so that I could read the TPB. Dark Temple tells the story of Jedi Master Eno Cordova (that's the guy who's research who follow in the game) and his Padawan Cere Junda (she later helps mentor the game's protagonist Cal Kestis) on a mission to the planet Ontotho to help mediate the rights to explore an ancient temple between two warring factions.

Written by Matthew Rosenberg with art by Paolo Villanelli, Dark Temple isn't a bad comic at all but it doesn't feel particularly significant, even to the game. It's a decent story with a cool new planet, some solid battles, and a look at another complicated relationship between a Padawan and Master with very different ideals and ways of approaching their role as Jedi. If you're hardcore into the game it's worth a read but my guess is most readers could skip this and be just fine. It's a loose tie-in, through and through. 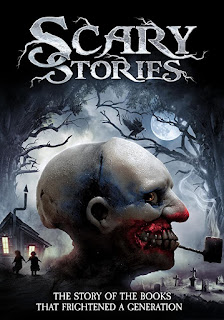 I said I watched a couple of spooky movies this week and the second I watched was Scary Stories. No, not the 2019 movie  Scary Stories to Tell in the Dark (which was pretty good) but the 2018 documentary by Cody Meirick about the book series by Alvin Schwartz, with illustrations by Stephen Gammell, that terrified most of us as kids. This is a pretty fun documentary if you're a fan of the books with lots of insight into the history of the books, the multiple challenges and attempts to ban the books over the years, the history behind some of the tales, and the legacy of these tales on fans and creators. The late Alvin Scwartz's son, Daniel Schwartz, gives a lot of insight into his father's work. The animated segments are amazing and I wish we could see the stories retold this way! The documentary tries to cover a lot of ground in a short time, though, and I wish it were a bit more focused. Schwartz's creative process, the stories behind his stories, and the history of the challenges to the books were of the most interest to me but it felt like the documentary spent the least amount of time on these. 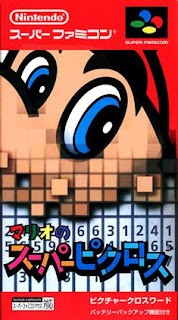 * What video game have I spent most of my time playing this past week? Why Mario's Super Picross of course! Nintendo just put some fantastic games on the Switch virtual NES and SNES (Donkey Kong Country II!) but the one that I wanted to play the most was Mario's Super Picross. It's untranslated, so it's still in Japanese, but since picross is a puzzle game you don't really need to be able to read to play it. The game was released in Japan in September of 1995 but was never released except through the Virtual Console. If you've never played picross (also called nonograms) it's a grid based logic puzzle where the end result is a picture or pattern. Using the numbers on the top and sides of the grid you have to deduce where to mark the board to form the correct picture. It's a lot of fun!
Now to wrap things up how about the list of the most popular articles for this week? I'm always fascinated to see what articles get the most hits and end up on the list of "Our Most Popular Dishes." at Action Figure Barbecue. This week has a lot of returning reviews but a few new additions as well.
Horde Zombie He-Man from Masters of the Universe Eternia Minis by Mattel is on his second week and now he's shot to the top of the list. He's the "chase" variant for the series 1 figures and is a really cool minifigure. Translucent green minis are just super cool! If you need one for your set hit me up. I might be able to help.
The Child from Star Wars: The Black Series by Hasbro is on his third week on the list and the power and adorableness of Baby Yoda just keeps on keeping on. With the hype for The Mandalorian Season 2  I think we're in for a lot of Baby Yoda in the months to come.
Barbecue's Bonfire 9/18/2020: Scareglow Birthday Cake Edition is on it's second week. This one is popular! Do y'all love Scareglow that much that you just like to stare at cakes bearing his likeness? Is it because I covered American Ninja 2: The Confrontation? I must know!!!
He-Man POP! Tees set from Funko is another newcomer. This is a Walmart exclusive set that features a glow-in-the dark He-Man POP! vinyl and a T-shirt. These have been fairly tough to find so maybe folks are interested in checking them out before dropping money to Scalpy McScalperson?
P-1000 from the Fortnite: Legendary Series is our second newcomer this week. The Fortnite releases seem to be pretty popular, don't they? I was a bit disappointed in this guy due to his limited articulation and inability to hold his accessories but he sure is cool looking.
Our last new addition to the top of the charts is Barbecue's Bonfire 9/11/2020. OK, I'm guessing folks are digging the Bill and Ted Face the Music review, maybe?
That's it for this week! Have a super spooky one! Watch some movies, eat some candy, run through a cornfield under the full moon, and have a blast. Just keep social distancing and wash your hands! Oh and wear a mask!