The Dawn of 31 Days of Toy Terror: Bones from Mighty Morphin Power Rangers by Bandai 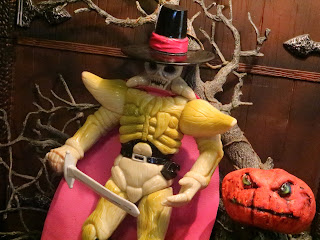 It has been over 5 years since I last reviewed a Mighty Morphin Power Rangers toy on the site and it very well may be 5 more until I do it again. I'm just not that big of a fan of Power Rangers. I don't dislike it or anything but my love for the property encompasses mostly the first season or two of the television show, the earliest toys, and little else. That being said it's interesting that my 7 year old has gotten back into Power Rangers, watching the original series on Netflix from time to time. Today I'm checking out the third Mighty Morphin Power Rangers figure I ever owned as a kid: Bones! Bones was the first villain of the week in the original series (he appeared on episode 2, "High Five") and was known as Dora Skeleton in the Japanese Super Sentai series. I remember getting bones in early 1994 as I had just gotten into Power Rangers and was eagerly looking for the toys. I loved Halloween themed stuff as a kid and Bones definitely jumped out at me as a cool Halloween themed toy. Honestly, he kind of reminds me of Scareglow, although the character is supposedly based on Baron Samedi from Haitian Voodoo. That's interesting, huh? Anyways, Bones was sold in a larger box as part of the second series of the Evil Space Aliens in the Mighty Morphin Power Rangers line. Ready to check out a spooky space alien from MMPR? Then join me after the break... 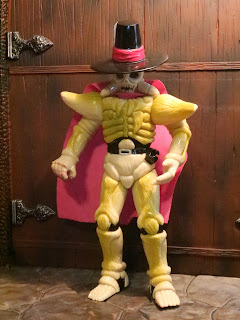 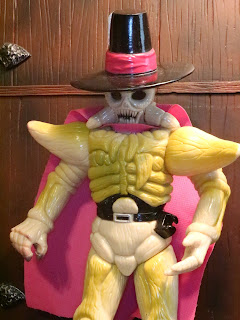 * Bones is a skeleton wearing a cape and a top hat and, if you haven't figured out by now, that's something I really dig. Bones is just so darn dapper! I really like his color scheme, especially the fact that his bones are a mixture of off-white and yellowish and I really like that they don't look like normal bones. He's got lots of weird, pointy bones mixed in to help give him more of an unusual and alien appearance. He's mostly a rotocast figure and the detail on his body sculpt is actually quite sharp. 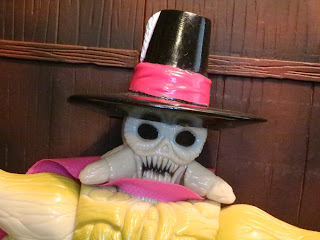 * Bones' headsculpt is nice and creepy. He's a skeleton, sure, but the face looks very different than your skeleton. Those teeth are long and pointy, like rows of daggers, and he has these weird bones protruding from his the base of his skull. The hat is really what sets Bones apart, though. I love it! Its very dapper with a purple band and a feather sticking out of the back. 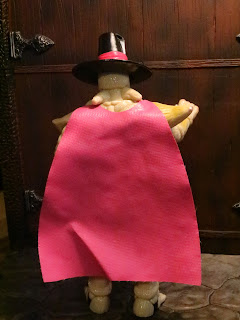 * Bones's purple cape is interesting as it feels like it's made from a very thin plastic, like vinyl. It definitely feels more like a soft goods piece, though, and it hangs nicely. There's really no way to remove it without somehow taking off Bones' head, so don't try. You'll probably just end up tearing it. Otherwise, it seems fairly sturdy. 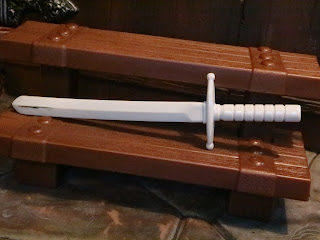 * Bones carries a sword which was called his Skeleton Sword. It's a pretty standard looking sword that fits very securely in his right hand. In the show he could use the sword to cause small earthquakes and tremors when it was thrust into the ground. This accessory is just a plastic sword, though. 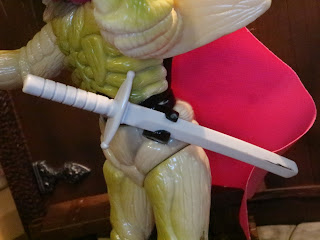 * Something else very cool about the figure is that Bones has a small place in his belt where the sword can be stores. It slides in rather tightly and stays in place. Nice! 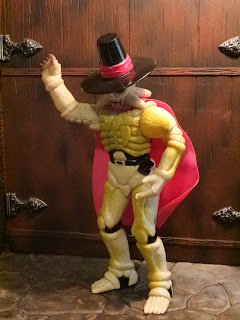 * For the early Mighty Morphin Power Rangers line Bandai released the Evil Space Aliens as rotocast plastic figures. While they look rather solid they feel a bit cheaper than the Rangers, who had rather good articulation and felt very sturdy. The articulation was pretty disappointing as the head and waist barely turn and the weird swivel hips seem pointless. I'd honestly be interested to see Hasbro revisit Bones in the Lightning Collection, but they seem averse to releasing Evil Space Mutants in the line. 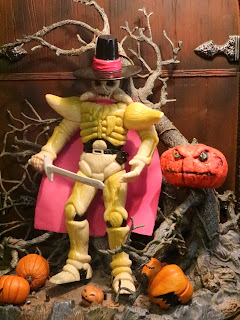 While the early Mighty Morphin Power Rangers line had some rather impressive toys in it, the Evil Space Mutants were handled with less care than the main line. They looked rather cool, though, and they do have a certain charm that I find more fascinating than the Rangers themselves. Bones is one of my favorites and the only one I've gone back to pick up. While is articulation is rather lame, the figure itself is quite cool and really stands out in the MMPR line. He's a Good and a 1/2 figure and, so far as I'm aware, the only toy version of Bones to date.