The Dawn of 31 Days of Toy Terror: Jeebs from Men in Black by Galoob 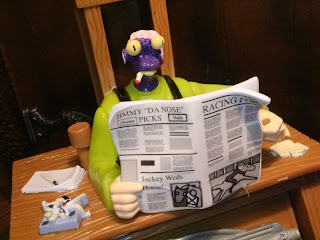 While Men in Black isn't a horror film, like many sci-fi films it certainly contains some elements of horror. Giant roach aliens, tentacled creatures, and a guy who can regenerate heads. Men in Black came out in 1997 during what an explosion of science fiction films and it was a huge hit. I loved Men in Black though I only owned five of the action figures from Galoob's toyline, though, as they were kind of underwhelming. I still have at least three of them but recently a series of strange events ended up with me adding another figure to my collection: Jack Jeebs, played in the film by Tony Shaloub. Jeebs is a pawnshop owner dealing in illegal alien weaponry who Agents J and K visit in the film. The scene with Jeebs is one of my favorite scenes in the movie so I figured this would be a fun figure to pickup and review for some fun, "horror" toy nostalgia. It's a really unqiue action figure for sure. Let's take a look at Jeebs after the break... 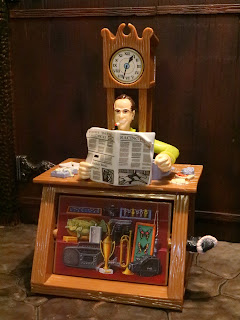 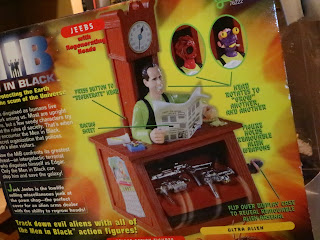 * While most action figure packaging includes a disclaimer that "Product color and contents may differ from photo shown" Galoob's picture of Jeebs has some serious differences from the toy included. The package shows Jeebs with three vac-metal guns but in the package we get four gray plastic guns. The stickers and color of the desk are also very different. Interesting stuff, for sure. 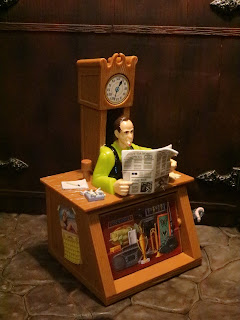 
* Jeebs is a very interesting action figure as he's sculpted as part of his desk. He's a really interesting piece although if you look at him you'll realize it doesn't make much sense. How does he get in there? Where is he supposed to be sitting? Jeebs is one of those action figures that is truly built around an action feature. That being said, he really stands out on the shelf and he's loaded with interesting features that definitely make him worth taking a look at. 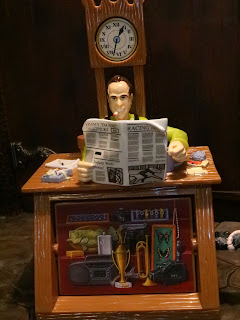 * Jeebs' desk is supposed to be the counter of his pawn shop since in the film he's a pawnbroker who deals in alien weapons. The front of the case is just a sticker but it shows off lots of random junk you would see at a pawnshop or thrift store such as trophies, a bugle, a VHS camcorder, a boombox, watches, rings, a camera, a mounted fish, a trophy, binoculars, a flask, some mounted butterflies, a flintlock pistol, a pearl necklace, and a semi-automatic pistol. Jeebs is also holding a newspaper with details on horse races while smoking on a big ol' stogie. He honestly feels like he could be a Seinfeld character more than a Men in Black figure. 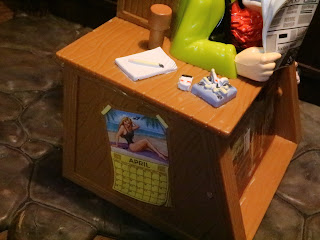 * Jeebs definitely wouldn't be a toy you'd see at mass market retail today. Not only does he have a swimsuit pinup calendar on the side of his desk (there's a UFO in the background!) but he's also got a matchbook and an ashtray filled with cigarette butts on his desk. The little items on the desk are part of the sculpt but they get some paint applications as well. The extra little details like this really remind me of the details on some of the Playmates' Teenage Mutant Ninja Turtles figures from the vintage line. 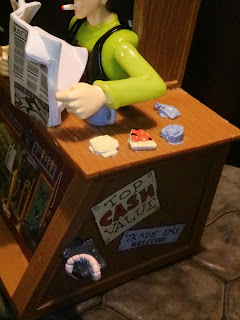 * He's got more stickers on the sides, a rat crawling through the desk (which functions as a knob to reveal his secret weapons cache), and a desk loaded with pizza, napkins, a mug, and some other junk. Slices of cheese, maybe? 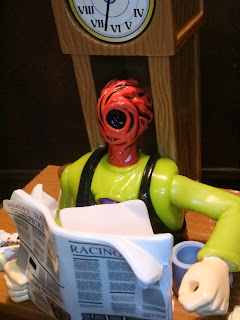 * In the film Agent K shoots Jeebs in the head, revealing that the alien can regenerate his heads. Apparently either getting shot or regenerating a new head "stings." Galoob incorporated this feature into the action figure by using a switch which causes Jeebs heads to rotate from his regular head to the "damaged" head shown to the left, to a regenerating head. The next head to cycle up is "hidden" under a hinged page of the newspaper that Jeebs is holding. The damaged head shown to the left is definitely not like what we see in the movie (Jeebs' head basically explodes into green goo) but it does convey the idea of a head shot OK. Considering this is a 23 year old sculpt, it's acceptable and kind of fun. It looks really freaky on its own for sure. 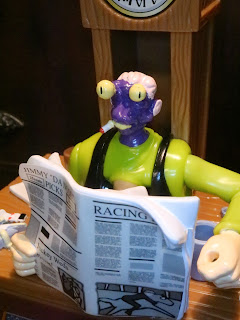 * Jeebs' third head shows him in the middle of regenerating. It actually kind of looks like what Jeebs' head looked like in the film although the purple color and visible brain seem to be made up for the toy. I like that he's still smoking, too. Did the cigarette regenerate somehow? 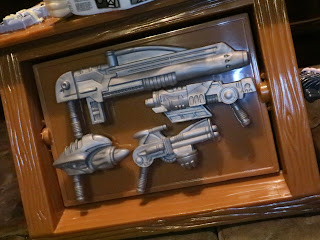 * When you spin the rat that is coming out of the side of Jeebs' desk it reveals four guns. The shotgun like weapon looks familiar although the rest of them may just be made up for the toyline. They're all cool sculpts, though, and they are easily removed from the weapons rack via simple pegs. 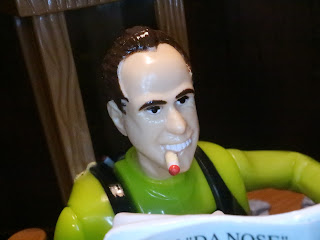 * I didn't own this toy as a 13 year old who collected action figures when the movie came out and part of it was because of the headsculpt. This looks nothing like Tony Shaloub. I have no idea how Galoob came up with this headsculpt but it's so far off from the Jeebs we saw in the movie. 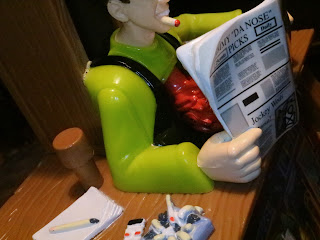 * Because Jeebs is built around the action feature he's not really a figure himself but just a torso with arms attached to the base. Heck, his right arm is not mobile. It actually looks bizarrely oversized, too. 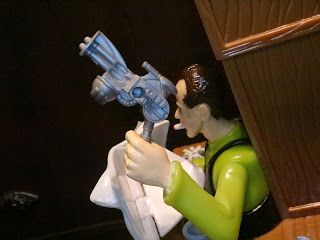 * While the package advertises that Jeebs "holds removable alien weapons" I'm not seeing it. His right hand just cannot fit these weapons into it, which is kind of disappointing. I guess Jeebs was supposed to be shooting back at the Men in Black or something? 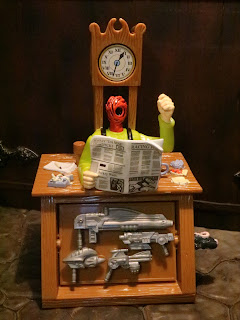 Overall Galoob's Men in Black line wasn't one of their stronger toylines and it doesn't seem to be a toyline too many folks are nostalgic for. I haven't actively collected it since 1997 but I was helping identify some action figure parts on a Facebook group and I was reminded of the line, which resulted in me picking up Jeebs for The Dawn of 31 Days of Toy Terror. Jeebs isn't a great figure at all but, gosh, Galoob did try to do some interesting things. He's incredibly unique with lots of funky details and the hidden weapons rack is great as you get four extra guns. Still, there's a lot of bizarre stuff here that's pretty underwhelming, too, as this really is more of a glorified accessory than a figure. It's a Good and a 1/2 toy, though. I doubt too many folks will be rushing out to pick Jeebs up but, if you do, you won't spend much. These guys are inexpensive and plentiful.

This is the first action figure of Jack Jeebs I've reviewed on the site.
Posted by Barbecue17 at 10/23/2020