The Dawn of 31 Days of Toy Terror: Martian Trooper (Topps) from Mars Attacks by Trendmasters 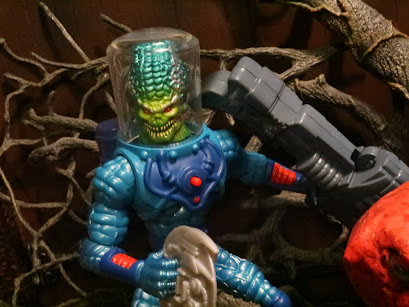 Trendmasters' 1996 Mars Attacks toyline has appeared in 31 Days of Toy Terror before so I think it's very clear that I have a lot of nostalgia for it. The line came out during the sci-fi boom of the mid-late 1990s and certainly captured my attention at the time. Trendmasters split the line into two, releasing toys from the 1996 Tim Burton film and from the then new Topps comic book series. I was a bigger fan of the movie based toyline but I remember the Topps based line, too, and I still own the Doom Saucer from the line that I got for Christmas 1996. I actually picked up a few of the Topps' comic based figures for this year's celebration. Let's start off with the Topps Martian Trooper whom the package identifies as a "relentless killing machine." 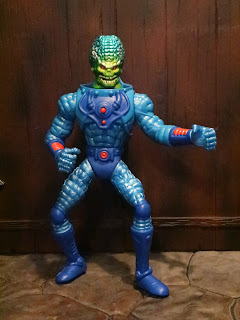 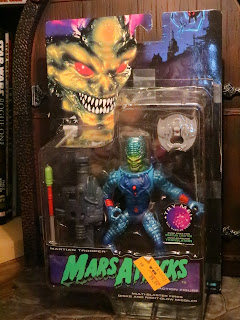 * Here's a quick shot of the packaging. It was pre-opened when I got it (you can see it taped in place) but you do get the chance to see what it looks like. The art was pretty cool on the packaging and pretty intimidating for a toyline presumably aimed at kids. I love it, though. The colors are excellent and really popped on shelves. 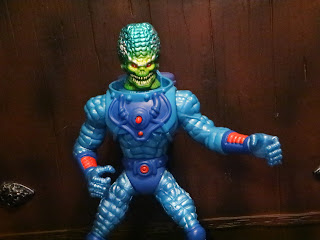 * Trendmasters' products usually had some pretty good sculpting that was on par or a bit better than most of the mainstream toy companies of the time and the Mars Attacks shows that off really, really well. The quilted detail on the Martian Trooper's outfit is really cool, combining a retro space feel with a more modern design. The blue and red color scheme is also quite nice (I love metallic blue) with clean paintwork overall. 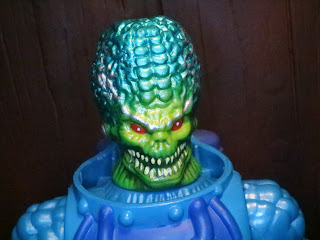 * The Martians all have different headsculpts in this series so we get three pretty nice headsculpts. The Martian Trooper is quite terrifying, far more so than the movie based Martian Trooper. Those red eyes and the metallic paintwork of his massive, swollen brain are really nicely done. There are also lots of little silver details on the sides, presumably some sort of tech integrated into his head. 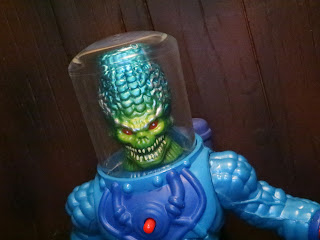 * The dome is removable so you can better check out the sculpt and turn the Martian Trooper's head. The dome fits on quite securely and looks impressive on the figure. I love the retro design of this guy! 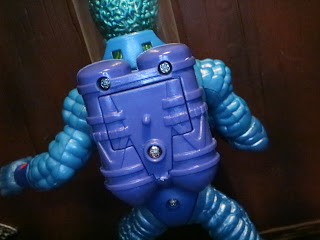 * The Martian Trooper's NO2 tank actually holds the batteries for the talking feature. Yes, the Martian Trooper talks. Press the button on his chest and he makes the Martian "ack ack ack" noise, like in the movie. Press it again and an electronic voice says "Destroy Earth." I'm pretty confident it's the same voice feature as the movie based Martian Trooper, but that's OK. Where else have we heard the Martians voices, right? 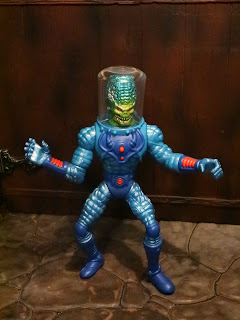 * Yes, the Martian Trooper is a bit pre-posed (I'll get to that in a minute) but the articulation is on-par or maybe just a bit better than many other toys from the era. Besides the big six joints you also get a swivel shoulder and a swivel forearm. That might seem gauche now but back in 1996 it was pretty cool to see stuff like that. 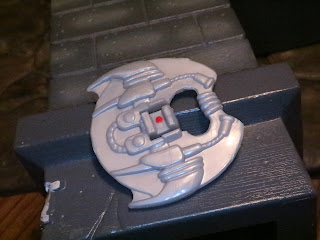 * The Martian Trooper has a missile firing weapon (which I'll get to in a minute) and this disk-like weapon is one of the projectiles. Even better, though, is that it can be used as a handheld weapon. The Martian Trooper can use this as a close quarters melee weapon which seems pretty wicked. 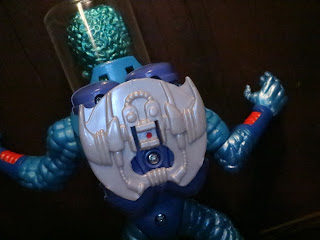 * There is a peg on the Martian Trooper's NO2 backpack and the weapon can actually be stores on the backpack. How cool, right? I love weapons that can be stored on the figure. 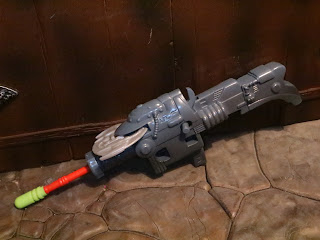 * The Martian Trooper's multi-blaster is pretty large and fires two different projectiles: The disk-like weapon show above and a standard missile with a glow-in-the-dark tip. The launcher has a fold down handle and the projectiles fire quite well, though it takes a bit of force to get the disk to fire. 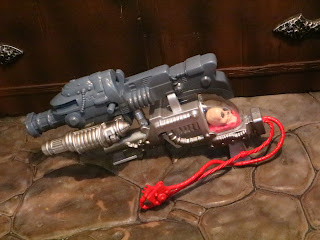 * On the back of the package there is a small line of text that mentions how the weapons from all three figures Topps based Mars Attacks figure in the set can fit together to form a
"massive neuro-destroyer." There are no directions for this and I really couldn't even find anything online about it. After messing around with the weapons from the Paeec Overlord, Supreme Commander, and the Martian Trooper, this is what I've come up with. It's not terribly exciting but it is kind of an interesting idea. 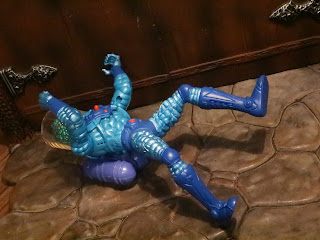 * Due to the somewhat pre-posed nature of the figure and the heavier backpack, it is pretty difficult to get the Martia Trooper to stand up without leaning him against something. He also doesn't have any holes for pegs in his feet, so you can't just gank a stand from somewhere else, either. 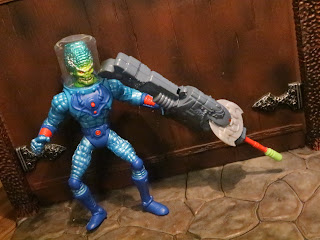 * The multi-blaster is huge and there really is not a satisfying way for the figure to hold it in a decent firing pose. Seriously, I'm so glad most lines these days have done away with oversized weapons that the figures can't actually hold. 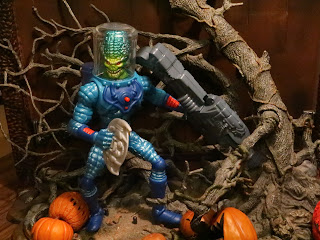 While the comic based figures certainly didn't light the world on fire, they were a pretty cool line of alien based toys. Trendmasters did monsters and alien characters quite well and they always made sure to jam their figures full of cool features. The Martian Trooper has some flaws but there's also a lot of coolness here, too. He's a Great figure with a wonderfully design and some fun (if oversized) accessories. Oh, he also talks. How about that? I have a feeling that this won't be the first Martian we have to contend with during The Dawn of 31 Days of Toy Terror...