The Dawn of 31 Days of Toy Terror: Burnheart from Super Naturals by Tonka 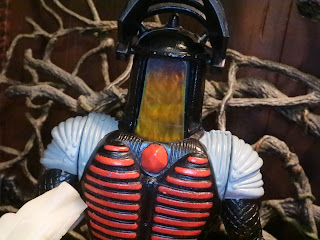 Holograms were all the rage in the 1980s and in 1987 Tonka combined holograms, horror, and action figures to create a very unique toyline that, unfortunately, didn't last very long. Tonka's Super Naturals used holograms to create toys of ghostly beings who escape from the Tomb of Doom and continue the battle beteen good and evil across the earth. While Hasbro's Visionaries line also came out in 1987 and used holograms, Tonka's Super Naturals line differed in that the holograms were used to represent actual characters. The Visionaries had holograms on their chest armor and on their staffs but the holograms on the Super Naturals were the characters' actual appearances. I remember having quite a few of these as a kid, as well as the Tomb of Doom, but sadly I don't know where they ended up (probably yard sale victims). The figures are a bit tougher to find complete but, fortunately, they're not very expensive. For this year's festivities I knew the Super Naturals needed to be represented so let's start by checking out Burnheart, one of the Warriors of Evil who has a thing for fire. I definitely had Burnheart as a kid as I remember having his gun for years after he disappeared. Let's get things heated up with a look at this flaming phantasm after the break... 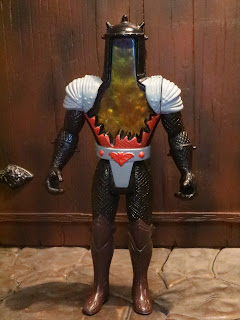 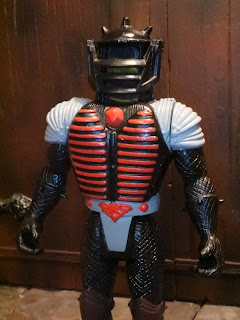 * Burnheart is an evil knight and thus he's covered in armor. He's covered in a some sort of mail and has extra armored plates on his chest and shoulders. The black and red color scheme makes him look a bit like Hordak too, doesn't he? The red bat on his belt really gives off an Evil Horde vibe. 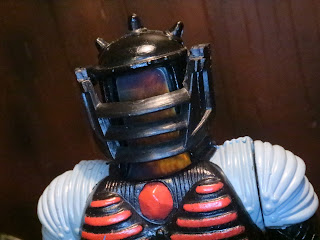 * Burnheart is wearing a black armored helmet with some spikes across the top and a working visor. The visor is removable (it can be a paint to find on loose figures) but it's really intended to be raised and lowered. 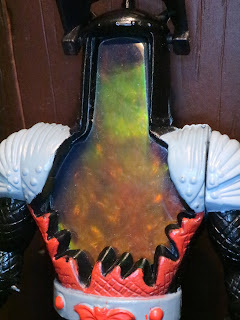 * The main selling point of Super Naturals is that each character's face is rendered through the use of a hologram. Remove Burnheart's chest plate and lift his visor to see what lurks underneath armor. I really had a tough time photographing Burnheart's hologram but it looks pretty cool and actually has two different images, representing the character changing forms. The main form is an evil knight who looks kind of like Freddy Krueger while the alternate form is a fire spirit of sorts. It's a cool feature and, in hand, it works quite well. 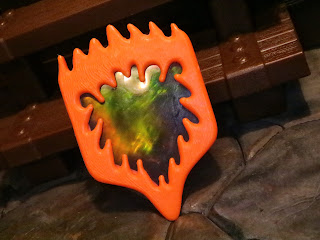 * Burnheart's shield is called the Shield of Fire and it's designed to look like a wall of burning flames. There's a grainy texture to it that makes me think of wood, but maybe it's supposed to be evocative of flames. There's a hologram in the center of the shield, too, and it kind of looks like a Cthulhu-like creature of sorts. 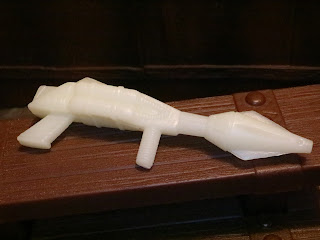 * To continue with his fire theme, Burnheart comes with a flamethrower. It's not the weapon I would expect a knight of any sort to use but I'm not going to complain about getting a toy with a flamethrower. There are even little tanks sculpted on the side, presumably to hold the ...ghost fire? Are the weapons ghosts, too? 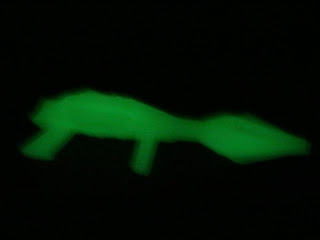 * Maybe, as Burnheart's flamethrower glows in the dark. It's a nice, strong glow, too! I think all of the Super Naturals weapons glowed in the dark, which is another element that ties all of the figures in the line together.

* I don't have it, but the original figure would have come with a minicomic, too. 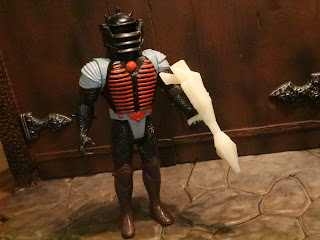 * It's really strange how the only functional handle for Burnheart's flamethrower is the forward handle. The rear handle is too wide and doesn't fit his hands. Honestly, it's kind of awkward getting him to hold this weapon. 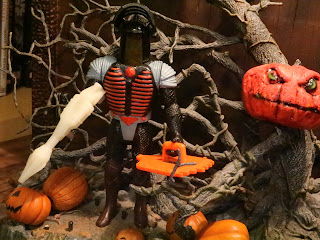 Super Naturals certainly isn't one of the classic toylines of the 1980s (I'd wager few really remember it) but it definitely was an interesting one. I don't know why it only lasted for one series. I've heard rumors that the holograms were fairly expensive to manufacture, but if the line were a success I can't imagine that stopping the continuation of the line. Burnheart is a Great figure and a lot of fun. The hologram definitely makes for a creepy looking character and you clearly got a lot of cool little extras included with him. Do you remember Super Naturals? Did you have a favorite? I may have one more popping in soon, so stay tuned!

This is the first figure of Burnheart I've reviewed on the site. Maybe someday someone will resurrect this line?