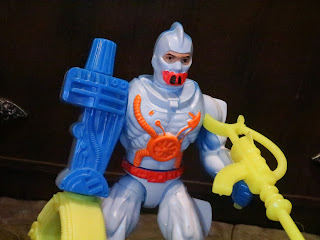 It's always fun when I can show off an action figure that is fairly uncommon and today I'm getting that chance with Spin-Fist Hyrdon from the fourth series of Mattel's He-Man figures. Released in 1992, the fourth series of He-Man figures are fairly uncommon with some like Too-Tall Hoove and Hook 'em Flogg being downright rare. The fourth series of figures only features six figures and two role-play items and all of the figures were variants of previously released characters. Hydron was originally released in the first series of figures in 1989 and is actually the leader of the Galactic Guardians. While in the cartoon Hydron hails from the underwater city of Serus on Primus, I've never understood why Mattel really doubled down on the diving theme for the leader of the Galactic Guardians. Spin-Fist Hydron continues with both the diving theme and the obscured face of the character's first action figure (oddly enough, the Masters of the Universe Hydron figure didn't show off the character's face, either) but in a new outfit that seems a bit more space-like. Let's check out Spin-Fist Hydron after the break and see if he's worth tracking down... 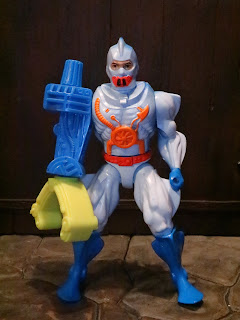 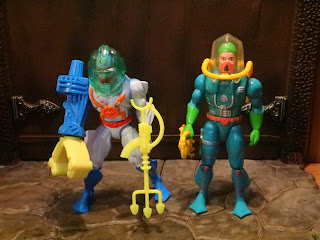 * Here's a quick look at Spin-Fist Hydron (left) compared with the original Hyrdron figure (right). You can definitely see the similarities although they're two completely different action figures with no reuse at all. I actually think Spin-Fist Hydron looks bulkier, and more like a vintage MOTU figure in his proportions. The color schemes are also noticeably different. Heck, you could pretend this was a completely different character if you wanted more individual Galactic Guardians in your collection. 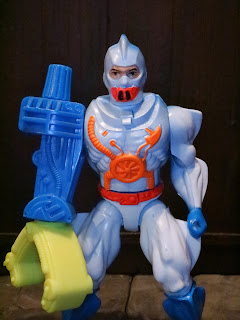 * As you can see above, while the original Hydron could have easily passed for an Earth diver this Hydron looks much more futuristic. He still has some of the diver flourishes like the fins on his arms, legs, and boots, but the grey and blue outfit and the slightly bulkier look makes him seem seem more like a spaceman. The color scheme is definitely something I really like about the figure. He's actually molded in dark blue but the gray on the front of the figure's torso is "sprayed" on, giving the figure a unique look where a bit of blue is showing through underneath. 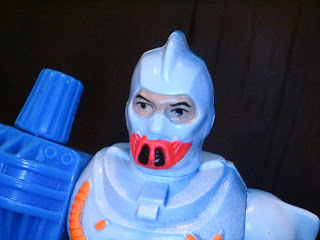 * While we don't really get to see Hydron's face (only his eyes!) the headsculpt is pretty cool. This version of Hydron's mask covers most of his face and has a more pronounced ridge on top. I like the breathing device, too. It looks quite sleek and high-tech. 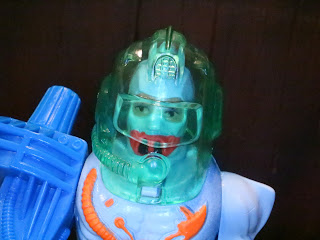 * Rather than the standard clear dome of the original figure Spin-Fist Hydron comes with a bluish green dome that actually features a lot of detail. It's quite cool and it stays on the figure very securely. 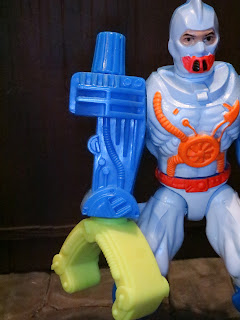 * Spin-Fist Hydron gets his name from this giant spinning claw that covers his right arm. Maybe this is some sort of cybernetic replacement arm as you can see his regular arm peaking out from underneath. There's clearly no place for his hand, though, so maybe he lost it and it was replaced with a giant spinning claw? That's a very Masters of the Universe way to deal with an injury for sure, so it is quite fitting. The large yellow claw is slightly flexible and it spins when you rotate the knob at the top of Hydron's arm. The packaging stats that Hydron uses his claw "to create a whirlpool for capturing mutant invaders on the Primian sea" and "to grab a goon." It seems like a pretty fun weapon and it's actually a very durable and fun play feature. 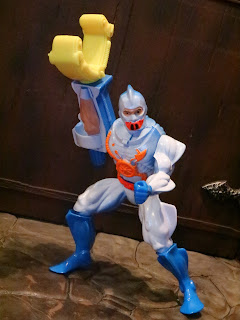 * Hydron has the same articulation as most other figures in the line which means swivel/hinge knees and hips and a swivel waist, head, and arms. The right arm actually has ratchets in it which nicely allows for Hydron to keep the heavier arm raised above his head when needed. He feels nice and sturdy and definitely seems like an improvement over the earliest figures in the line. 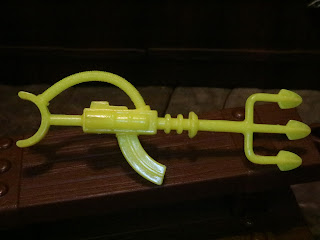 * Spin-Fist Hydron's Triton spear gun is a cool looking weapon and a pretty uncommon accessory, too. It fits in his left hand easily though I would caution being careful with it (it seems like it could be a bit fragile). It has a trident on the end but it also looks like it has a magazine for ammunition of sorts, too. 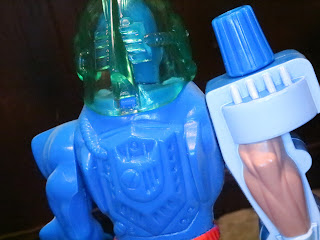 
* My only negative with Hydron is that his helmet is difficult to remove. Honestly, I'm probably going to put it on and leave it on after the review as it seems like the tabs could wear down and possibly break over time. 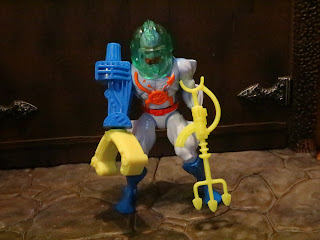 I'm not the biggest fan of the original Hydron figure from the first series but this one is a definite imrprovement. He has a better design and color scheme, a better weapon, a better helmet, and the spinning claw action feature is actually really fun. He's a Great figure and I'm really glad I was able to track one down. Completing series 4 of the He-Man line seems like it could be a bit tough but Hyrdron gives me a bit of hope that I might be able to do it. He's a cool redesign that has a more 1990s action figure feel. I know the New Adventures expansion was never very popular but I would be very interested to see what a mid-late 1990s MOTU line would have looked like. This is the closest to that era we'll likely ever get.

If you're a fan of Hydron I've also reviewed the Masters of the Universe Classics Hydron.