The Dawn of 31 Days of Toy Terror: Ray Stantz and Wrapper Ghost from Ghostbusters Kenner Classics by Hasbro 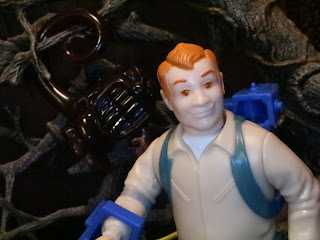 Ray Stantz, ladies and gentlemen! The heart of the Ghostbusters! With all of the craziness going on this year (well, at least back in July when I started working on all of these reviews) I decided that we needed a little bit of nostalgia this Halloween so The Dawn if 31 Days of Toy Terror 2020 is focusing on things that I recall from my youth. Yeah, there are going to be some reviews of newer toys as well, but overall we're going back to the toys of yesteryear. Let's kick off today's dose of Hokey Halloween Horror with a look at Ray Stantz from Hasbro's recent redo of the classic Kenner figure. Yeah, he's a modern remake but he's based on a 1986 figure, so let's go with it. (I promise, true vintage toys are coming!). In my review of Peter Venkman I mentioned that he was my first Ghostbusters figure (and probably one of the first five action figures I ever owned as well), and I believe Ray was my second.

I couldn't tell you who my third was, however, because I ended up getting Egon, Winston, Slimer, and Mr. Stay-Puft at the same time. My parents took me to a toy store (remember all of the great small toy stores that used to exist who actually sold action figures and such?) and told me I could pick out a couple of figures. I got excited. Very excited, and quickly grabbed one of the Ghostbusters figures and ran to the counter, slapping the figure down in front of the lady running the register. Despite being so young, I can vividly recall this scene. Then I ran to grab another. This time I moved more quickly and rather than placing the figure down I sort of slid it onto the counter. Being a young tyke of maybe 3 or so, the definition of "a couple" was quite nebulous to me and I ended up going back for a third figure. This one didn't even warrant a slide onto the counter but was hurled by young me like a discus thrower of ancient Greece. My parents stopped me as I was making my way back with my fourth figure and helped to quell my zeal before I took to the counter with a Firehouse playset held in front of me like a battering ram. I remember lots of laughter from my parents and the lady at the counter, probably recognizing that I had no ill intentions but was just so overcome with the joy of the 1980s toy store experience. The lady at the counter actually grabbed a plastic Power Sword and a (then deeply discounted) lightsaber and asked me to kneel down. I knelt down next to the register and she tapped me on the shoulders, the left with the lightsaber and the right with the Power Sword, as she said: "I dub thee, Barbecue17, a true lover of toys. Some day thou will go forward and share a love and passion for action figures all around the world." Also, it turned out that the lady at the counter was none other than Phoebe Cates!

OK, I made up that last part. And the part about being knighted in a toy store. Everything else was true, though. It's not a spooky story but it sure is a tale of toy nostalgia! And that's a great place to jump on in and check out this figure of Ray Stantz with Wrapper Ghost... 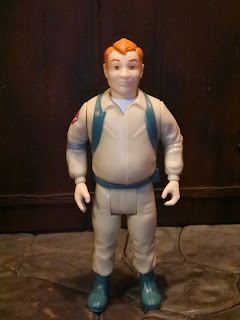 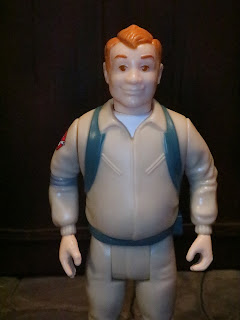 
* The Real Ghostbusters versions of the team really don't resemble their film characters although they did utilize the personalities of the film versions and some caricatures of the actors. Ray is shorter and a bit heavyset with some bunching of the material on the pants of his jumpsuit. Ray also stands out as he is wearing a tan jumpsuit which more closely resembles the movie outfits that the Ghostbusters wore. He's got the straps for his Proton Pack molded on as well as a pouch on the left side of his belt. 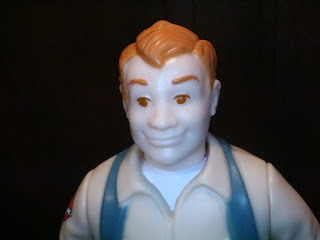 * Ray sure has a pleasant looking face, doesn't he? Kenner did capture the child-like wonder and overall affability that Dan Aykroyd brought to the roll, although the figure looks nothing like Aykroyd. They also gave Ray orangish-red hair, probably to further differentiate the Ghostbusters. 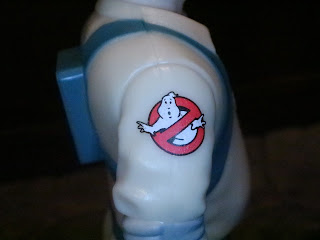 * The Ghostbusters logo on Ray's right shoulder is neat, clean, and matches the rest of the team. 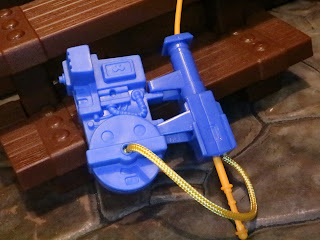 * The Proton Packs really are pretty cool in this line and nicely capture what we saw in The Real Ghostbusters. There's quite a bit of detail here, too. The Neutrino Wand (Kenner called it a Nutrona Blaster) is attached via a yellow cord, which I love. It's a string so it won't bend or break over time. The Neutrino Wand fits securely on the backpack, though the stream isn't detachable so it makes toting the pack around kind of awkward. The pack plugs into the back of the figure and stays on quite well.The plug is actually improved from the vintage toys and seems much less breakable. 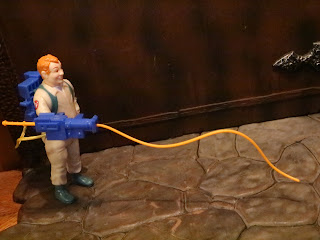 * To further give each figure their own unique feel Kenner gave each Ghostbuster a differently colored particle stream (Ray's is orange!). Kenner called these zapping rays and they can actually be spun and wiggled by turning the yellow handle at the back of the Neutrino Wand. It is a pretty cool play feature and I remember being amazed by these as a kid. 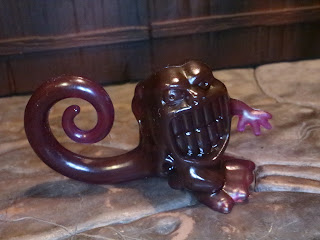 * Ray's companion ghost is called Wrapper and he's got a long, curly tail which he can use to wrap around the Ghostbusters. He's also got some massive teeth that remind me of the guys from "The Teeth" in the book In a Dark, Dark Room. I love how the companion ghosts are translucent, too! They look like big, gummy candies! 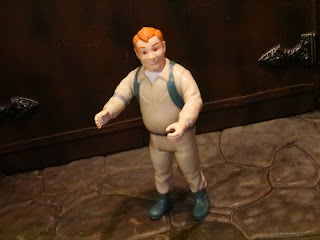 * While the articulation is faithful to the vintage toy's five points model, the limbs on the Hasbro feels kind of gummy and rubbery.  I don't remember the vintage toys feeling like that at all. They always seemed very solid and sturdy. Ray's joints, just seem kind of rubbery with a bit more friction than I would hope for. 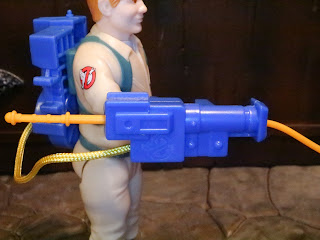 * While it's more of a problem with the vintage design rather than a problem with Hasbro's remake (since Hasbro was simply being faithful to the vintage toy), I've never liked the fact that the streams are not removable. Plus, they were always very, very fragile. Seriously, these things can bend and break easily, so be careful! These feel a bit more durable than the originals and collectors should be fine, but watch out if you're giving these to a child. 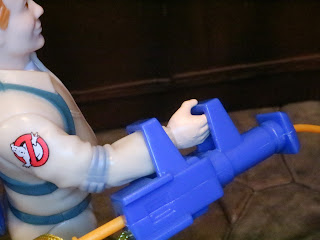 * Like with Winston, the Neutrino Wand doesn't fit very securely over Ray's right hand. He doesn't really grip it and unless you find a way to "wedge" his hand into the handle, it will rattle around a bit. 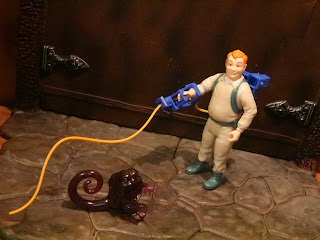 As much I like Ray Stantz, this figure definitely is far from perfect. It sure is fun and nostalgic, though, and if you're just planning on having these on a shelf to reminisce about your childhood then you might be quite happy with these. Ray is still a Good figure and you'll undoubtedly want him if you're completing the set, but he's not a standout of the line or anything nor is he a true improvement on the vintage toy. I do really like that Hasbro reissued these, however. I picked mine up in June and wrote this in early July in preparation for October and at the time of writing these were just starting to really make it to shelves, Hopefully you can still find them this Halloween season!

If you're a fan of Ray Stantz then check out my reviews of the Minimates Gooey Ray Stantz and Exploding Stay Puft two pack, the "I Love This Town" Boxed Set, and the Spectral Ghostbusters set with Spectral Ray.