The Dawn of 31 Days of Toy Terror: Red Cap from Monster in my Pocket by Matchbox 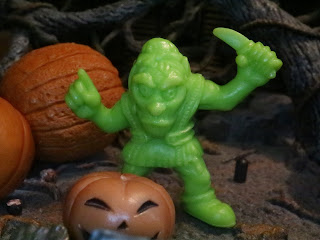 Matchbox's Monster in My Pocket is another toyline that almost always makes an appearance on 31 Days of Toy terror and it fits in with this year's theme of horror toys prior to the year 2000, doesn't it? I didn't have too many Monster in My Pocket minifigures as a kid but I did have a few and, of course, I've picked up more over the years. I love how the line features a blend of common movie and literary monsters, monsters from around the world, and other random creatures. This year I'm checking out the Red Cap, a small malevolent creature from English and Scottish folklore who takes his name from his distinctive red hat which he dyes in the blood of those he kills. Why the Red Cap? My daughter and I have been reading through the Harry Potter series lately and Red Caps are mentioned there, so it jumped out at me. Red Cap also is featured in the Hellboy story The Iron Shoes, which is a pretty cool short story about the creature. Most sources seem to call the creature a Redcap, but Matchbox apparently put a space between the red and the cap, so I'm using their version. Ready for a look at a spooky little Monster in My Pocket? Then let's check out the Red Cap after the break... 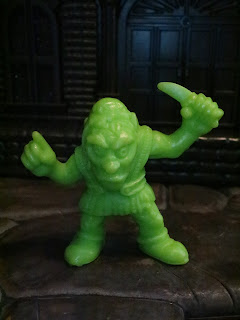 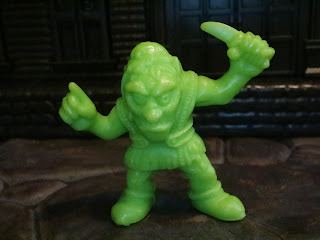 * The Red Cap is a diminutive little figure that's sort of like an evil faerie or a brownie. If you look closely, you can see his sharp teeth, which are a common part of his description. He's wearing a tunic-like outfit, a cap (assume it's red), and some simple shoes. Iron shoes or boots are another prominent part of the Red Cap stories, though it's tough to tell if these are iron or not. He's also wielding a small knife though some stories depict him with long, sharp fingers. The knife is certainly gruesome, though. 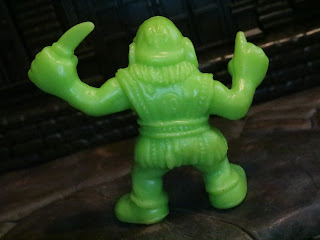 * The Red Cap has a small "10" on his back which was part of a game of sorts you could play with these. It basically revolved around the monsters each having a power level and a stronger monster beat a weaker monster. Kind of simple and pointless, I guess, but fun still the same. 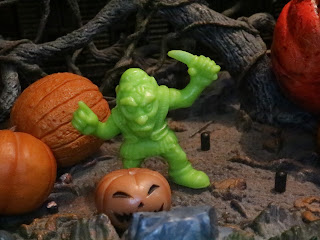 I really like the Red Cap. He's actually one of my favorites as he has some cool little details and is just a weird looking little guy. He's pretty unique, too, in that he's based on a folklore character that isn't exactly popping up everywhere and in everything. I love how Matchbox explored a wide variety of monsters, creatures, and characters from around the world. The Red Cap is a Great little minifigure and another spooky figure from this incredibly cool minifigure line. I really wish Monster in My Pocket would reappear again someday, don't you?

This is the first figure of a Redcap I've reviewed on the site. For more figures from Monster in My Pocket check out the following:
Astaroth
Creature from the Closet
Drude
Dybbuk
Ghost
Gremlin
Karnak
Mad Gasser of Mattoon
Mad Scientist
Skeleton
Witch