The Dawn of 31 Days of Toy Terror: Dimetrodon from Jurassic Park by Kenner 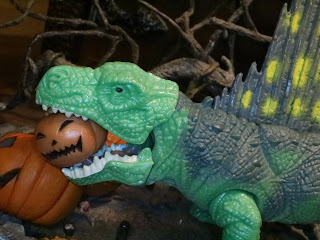 Dinosaurs are probably the first first "monster" toys that many of us owned as kids. Toy dinosaurs are easily available and kind of an evergreen item at retail stores. The 1980s certainly had plenty of dinosaur toys marketed to kids, both "off brand" items like the Imperial dinosaurs and mass market lines like Tyco's Dino Riders. The 1990s were a golden age for dinosaur toys, however, thanks to Jurassic Park. I turned 10 in 1993 and, at the time, Jurassic Park was the biggest thing in the world. Kenner put out a pretty solid toyline that managed to capture all of the dinosaurs in the movie, and many who weren't, in plastic form. That was the great thing about the Jurassic Park line: Nearly any dinosaurs fit in as you could imagine that there were an untold number of dinosaurs that could be stumbled upon while exploring the island. Today I'm checking out the Dimetrodon. I remember buying the Dimetrodon at a K-Mart back in 1993 (probably the one my dad managed at the time) as he just seemed so cool and the colors were incredible. A large carnivore who liked to hang out in swampy areas, the Dimetrodon made an awesome addition to my dinosaur collection. Ready for a look at the Dimetrodon? Then let's check her out after the break... 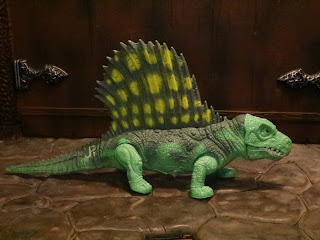 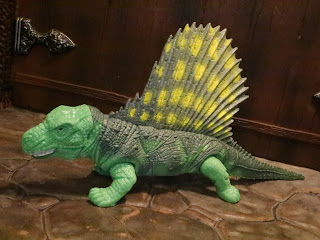 * Kennner did an amazing capturing the Dimetrodon. While he's really not a dinosaur (Dimetrodon was a synapsid and died out 40 million years before the dinosaurs appeared) you can see why he fit in with the rest of the Jurassic park crew so well. He's pretty terrifying and has a fantastic paint job. The different shades of green look amazing and the yellow highlights of his spine are incredible eye catching. 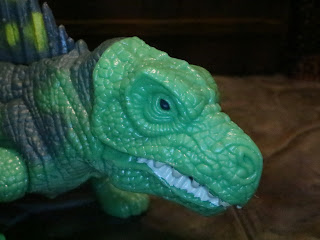 * The headsculpt is solid. Kenner did an excellent job of making the dinosaurs in their Jurassic Park line look different from generic, dollar store dinosaurs. They really gave them a personality all of their own. 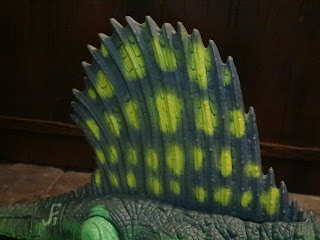 * The Dimetrodon is most recognizable by its long neural spines that form a sail down its back. There are multiple theories as to what purpose these  served with suggestions ranging from controlling body temperature, serving as camouflage when hiding among reeds and such in a swamp, attracting mates, or even as a literal sail, allowing the creature to better move through water. From what little research I did, it now seems that the most accepted theories are thermoregulation and selection of a mate. Kenner did their part by making the sales look pretty awesome regardless of what they are for. 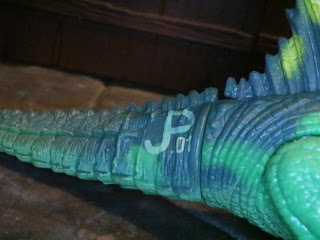 *  To "brand" the dinosaurs as official Jurassic Park toys, Kenner came up with a cool logo and began numbering the dinosaurs. It's definitely a branding thing, but I've always liked it. Inteestngly, the Dimetrodon is #01.
*The Jurassic Park figures each came with a very cool trading card with original art. I don't have my originals anymore but the Dimetrodon's was called "Jungle Surprise!" 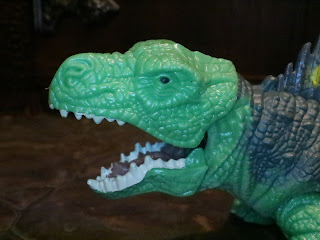 * The Dimetrodon has a great action feature! When you pull down one of her rear legs her jaw opens up, revealing a frightening mouth. If you pull her leg far enough her jaws actually stay open until you bump the mouth, causing it to snap down. I love it and it still works great after 27 years. 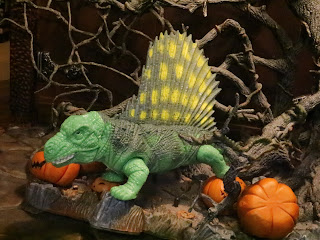 The Dimetrodon is one of my favorite dinosarus from the Jurassic Park line. While it never appeared in the movie nor is it the most well articulated dinosaur in the line, the Dimetrodon looks fantastic and is really a fun toy. That opening and closing mouth really helps sell this one! The Dimetrodon is a Great and a 1/2 figure and still is one of my favorites. What were your favorite dinosaur toys from the Jurassic Park line? Let's talk about it in the comments below!

This is the first toy of a Dimetrodon I've reviewed on the site. For more toys from Kenner's 1993 Jurassic Park line check out the following:
Velociraptor
Posted by Barbecue17 at 10/14/2020