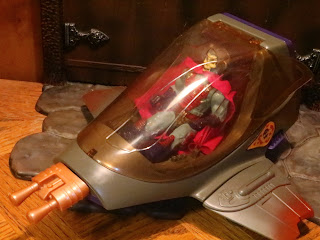 This has been a pretty packed week for JuNe Adventures over here at Action Figure Barbecue and today I'm checking out another vehicle from the vintage He-Man toyline: The Shuttle Pod! Remember my story about picking up a load of He-Man toys from a discount toy store (probably Toy Liquidators) at the Gurnee Mills mall when I was a kid? The Shuttle Pod was another one of the He-Man items I picked up on that epic day! Released in 1989 in the first series of figures, the Shuttle Pod is referred to as the "Ultimate throne ship of doom" and can attach to the Terroclaw to create an even fiercer fighting machine. I see a lot of collectors referring to this vehicle as the Dreadwing but I can't find any packaging that refers to it as such. Can anyone point me in the right direction? Despite what you call this vehicle, the Shuttle Pod is actually an incredibly fun toy with a few cool features. Let's check it out after the break and see what it offers... 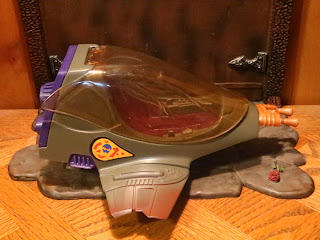 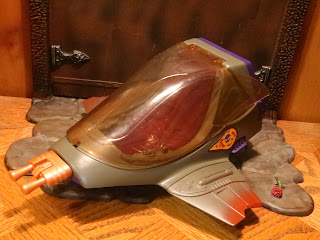 * The shuttle pod is a simple vehicle that seats one figure. I really like it because it has such a simple, classic design. It really feels like something you would see in an old sci-fi movie or comic strip. It's small enough that you can easily pick it up and "swoosh" it around your home if you so desire (which, c'mon, is always a lot of fun no matter how old you are!). 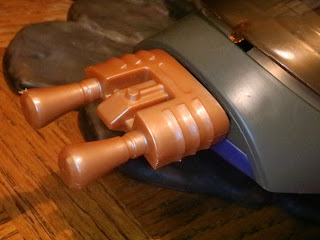 * I love these dual mounted laser cannons on the front of the Shuttle Pod. It's nice to have some standard offensive weaponry on a vehicle. 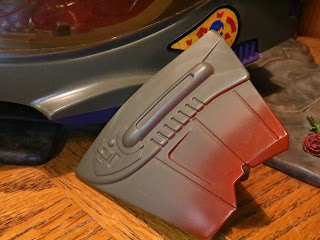 * The small wings of the shuttle pod are really cool both because they have an interesting color scheme (I like how they have red tips) and because they can swivel up and down. 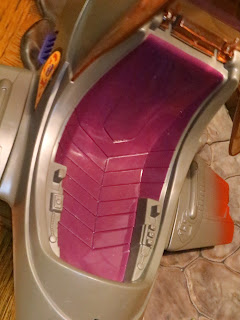 * The Shuttle Pod has a working canopy that lifts up to reveal the cockpit. It's rather spacious for a single person spacecraft and most of the He-Man figures can fit inside of it with ease. I've always loved the purple interior of the Shuttle Pod, too. It's so classy and stylish! 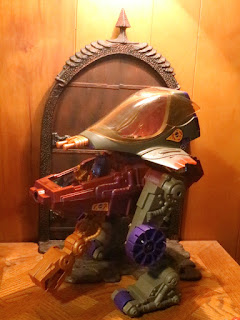 * In my review of the Terroclaw/ Terrapod I showed off the two different ways that the Shuttle Pod can attach to the larger vehicle via the port on the belly of the ship, so go check that out! The Shuttle Pod serves as a turret for the Terroclaw and can also attach to different places on Starship Eternia to pretend that it's docking on the heroes' ship to take it over. I liked how the vehicles from the first series of New Adventures toys interacted with each other and I wish Mattel had kept it as a feature for some of the vehicles later in the line. 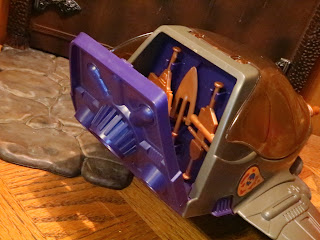 * My favorite feature of the Shuttle Pod has always been this secret hatch behind the engines. It opens us to reveal a small storage area filled with gear for the Evil Mutants to use. 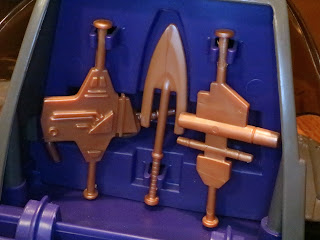 * The gear actually stows away in neat little storage clips, too. There are three clips for the larger weapons and an alcove for storing the laser pistol. There is also space to store another weapon from one of the figures in the alcove. 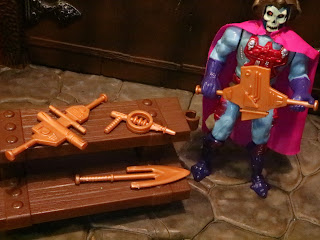 * The included weapons are a cool, simple laser pistol, a bladed weapon of some sort, something that looks like an energy bow, and then whatever Skeletor is carrying. Maybe it's some sort of scanner or even part of the ship? Skeletor can hold this weapon and the energy bow in his hands while the other weapons work better with the other Evil Space Mutant. It's always cool to get extra weapons for your figures included with a vehicle so the Shuttle Pod really delivers on this front. 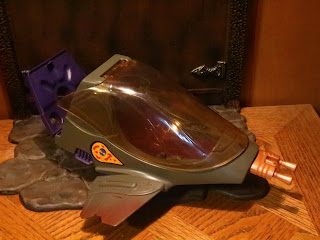 I love the Shuttle Pod. Seriously, it's one of my favorite vehicles from the He-Man line. Oddly enough it's still a fairly easy vehicle to get your hands on as even mint in box pieces don't sell for much these days. That's good for buyers, though, as this thing is really fun. I can't quite explain my love for this piece but it's an Epic little vehicle. Whether you use it as Skeletor's personal shuttle or as the default spacecraft that all of the Evil Space Mutants jet around in there is a lot of play value here in such a small vessel!

This is the only Shuttle Pod ever made in a MOTU line and it's the only one I've ever reviewed. For more He-Man toy reviews check out the following: