The Dawn of 31 Days of Toy Terror: Paeec Overlord from Mars Attacks by Trendmasters 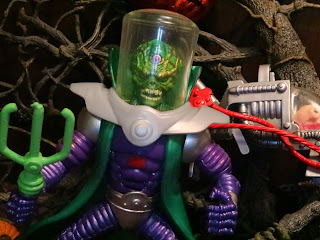 I'm returning to Trendmasters' Mars Attacks series based on the Topps comic book series for another creepy toy for The Dawn of 31 Days of Toy Terror.  I've already looked at the Martian Trooper so now let's look at the Paeec Overlord, the Martian Military Advisor. I never read any of the 1990s Topps Mars Attacks comics so I don't know if the Paeec Overlord appeared in that series or if he is a creation of Trendmasters. I actually looked through my copy of Topps' Mars Attacks 50th Anniversary Collection (which contains some of the 1990s Topps material) to see if I could find any evidence of the Paeec Overlod, but I couldn't. Anyways, this guy is pretty interesting as he's only got one eye and it's situated in the middle of his forehead, presumably representing some sort of telepathic powers he might possess. Let's take a look at the Paeec Overlord after the break for some chilling terror from space after the break... 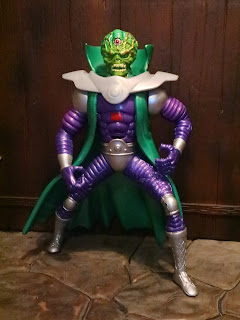 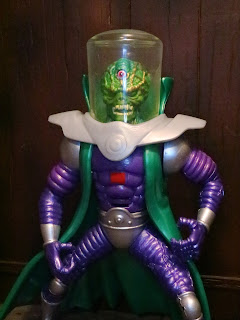 * While the Martian Trooper is wearing a suit designed for combat, the Paeec Overlord is wearing an outfit that seems more ceremonial. Decked out in purple and green (the two secondary Halloween colors) with silver highlights, the Paeec Overlord is nicely distinguished from the standard Martian Troopers. The green robe isn't removable but it is molded from a more pliable plastic so it doesn't interfere with the articulation too much. The gray shoulder pads are quite cool; very regal but also functional to help hold the dome of the helmet in place. 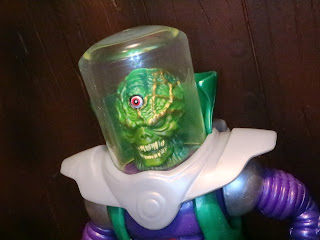 * Like the rest of the figures in the line the Paeec Overlord is also sporting a translucent dome. His dome, however, has a thin coating of green slime inside. I wonder if this is supposed to be something emitted by his telepathic brain or something? It's pretty gross for sure. 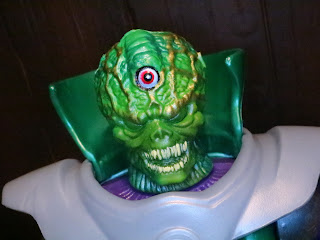 * Since the dome is removable you can check out the Paeec Overlord's headsculpt. It really is an excellent sculpt with great paintwork, probably my favorite of the Martian heads in this series. His teeth are quite nasty and he's wearing an evil grin to show them all off. Also, the places where regular eyes would be are covered over as the Paeec Overlord has one massive eye in the center of his forehead. The paintwork is really detailed and there are gold highlights on his massive, bulbous brain. Trendmasters did some excellent work on monster toys most of the time and this guy is a gem. 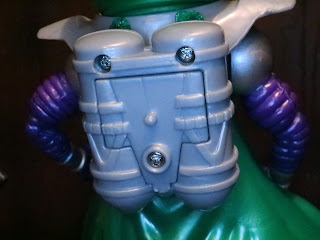 * Like the Martian Trooper, the Paeec Overlord's NO2 tank also holds the batteries for his talking feature. Press the button on his chest and he makes the Martian "ack ack ack" noise, like in the movie. Press it again and an electronic voice says "Trust Me." I'm pretty confident it's the same voice feature as the Martian Spy Girl from the movie based line, but that's OK. Where else have we heard Martian voices, right? 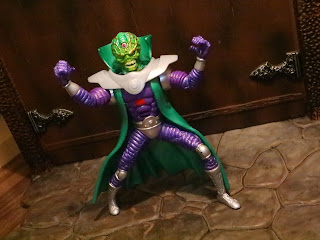 * For 1996 standard this guy is decently articulated. He's got the standard six joints (remember when v-crotches were all the rage?) plus he has bicep swivels. He's a durable, sturdy toy and he stands on his own (or with the aid of his cape), so that's certainly a plus in my book. 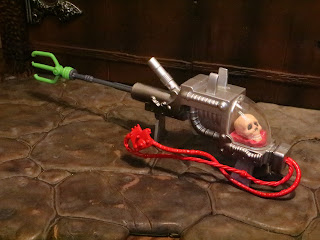 * The Paeec Overlord comes with a massive Brain Blaster weapon. It's a spring loaded missile launcher that fires a green trident (with a glowing tip). I'm not really sure what the red wires are for as they don't attach to the figure as best as I can tell, but there is some cool detail on the weapon. Combine it with the weapons from the other two figures in the set to make a very cumbersome Neuro-Destroyer. 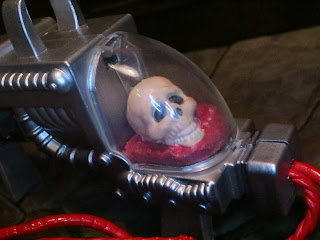 * Check out this little chamber inside of the Brain Blaster: It's got a skull resting in a pile of gore! Pretty gruesome, right? That's Mars Attacks for you! 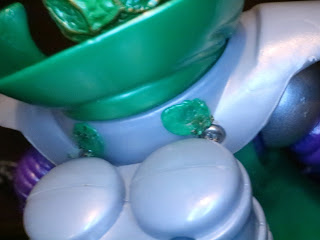 * I'm not sure what these messy green blobs on the back of the figure are supposed to be. Maybe they're intended to cover up the visible screws but where misplaced? 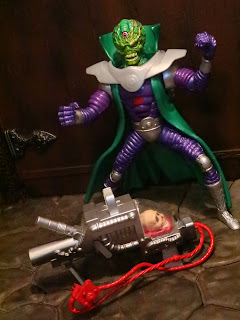 * The Brain Blaster is so huge and so awkwardly designed that I cannot figure out any way for the Paeec Overlord to actually carry it. Seriously, if you can figure it out let me know.

* His trident missile is also supposed to serve as a weapon of sorts but the Paeec Overlord's hands cannot grip it at all. You just have to sit it in there. That's disappointing, too. 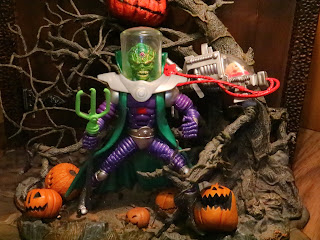 I love the headsculpt of the Paeec Overlord, and the slime in his dome helmet, but the fact that he can't really hold or interact with his weapon is a real bummer. He's still a Good and a 1/2 figure and if you're picking him up these days you can get him pretty cheap. I don't know if anyone would call Trendmasters' Mars Attacks lines action figure classics but they certainly hold some nostalgic power as horror toys for those of us who were the right age for them in 1996. I remember getting a few Mars Attacks toys for Christmas of 1996 (both flying saucers and a Brain Disintegrator, both of which I still have). Maybe I ought to finish the collection...

This is the first Paeec Overlord I've reviewed on the site. For more figures from Trendmasters' Mars Attacks line check out the following:
Martian Trooper