The Dawn of 31 Days of Toy Terror: Snakebite from Super Naturals by Tonka 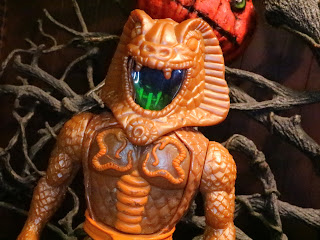 Today we're experiencing an encounter with the supernatural! Tonka's Super Naturals, to be precise! I talked about the history of the 1987 Super Naturals toyline when I reviewed Burnheart recently so today we can jump in and get right to checking out Snakebite, another member of the Forces of Evil. Man, snake themed bad guys were everywhere in the 1980s, weren't they? G.I. Joe had Cobra, an entirely snake themed faction of bad guys who had Serpentor, who went all out with the whole snake thing. Masters of the Universe also had their own serpentine faction, the Snake Men. Snake people just seem to generally be bad guys (Slytherin, anyone?) and, of course, Snakebite is a villain. Super Naturals really lumped together every gimmick you can imagine from the horror themed toylines of the day. You had removable disguises, holograms, and glow in the dark accessories. It really is a wonder that this line didn't do better than it did as it seemed like it was loaded with kid appeal. Let's take a look at Snakebite after the break on this spooky October day... 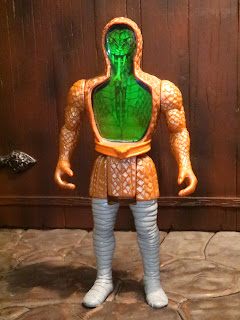 The Positives:
* Snakebite is a very cool looking figure. He's definitely reminiscent of other snake themed villains but his armor really looks fantastic. His scales are very nicely sculpted and the copper colored paint used is quite striking. I love the metallic sheen of this guy! 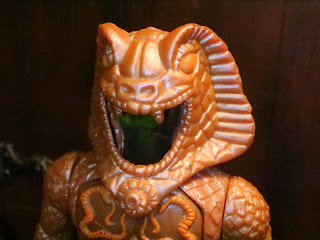 * The cobra inspired hood is also really well done. It matches Snakebite's armor perfectly even though it's made out of a very rubbery plastic. The sculpt is quite detailed and matches the ornate details of the rest of the outfit. If we get Serpentor in the G.I. Joe Classified Series (not that he would be in my top 50 or anything) I could imagine something like this being used as his headpiece. 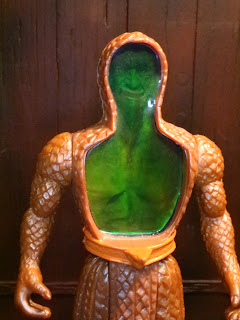 * The Super Naturals are ghosts and to represent their ghostly forms Tonka used holograms hidden underneath their chest plates and helmets . Each hologram has two different images to depict the character transforming their appearance and Snakebite's is labeled as turning from  Snake Charmer to a Deadly Cobra. I'm not sure that the hologram makes me think of a snake charmer as he looks more like a stereotypical image of an evil pharaoh, but it is a cool hologram and I managed to take a pretty decent picture of it. 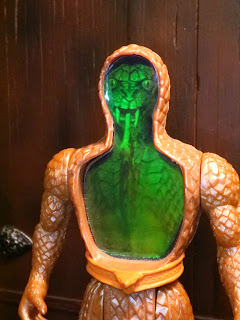 * The second image on the hologram is a pretty evil looking snake. Yikes! I hate snakes so this is really, really creepy to me. Look at those eyes and the tongue! 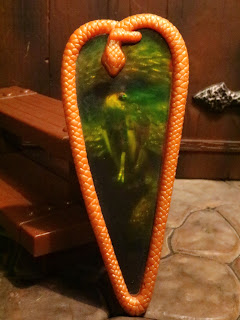 * Snakebite takes the whole snake thing even further by having a tall shield that is adorned with a snake design on the edges and which features a hologram of a snake striking. It's pretty cool! 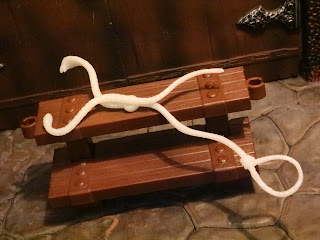 * Snakebite also has a really unusual snake staff. It looks like two staffs woven together with aone of the snakes being a hooded cobra. The staffs connect in the middle and can move back and forth. There's also a loop at the bottom as well. I'm not really sure what the loops is for, though, or why the staff rotates, but it's a pretty interesting accessory. 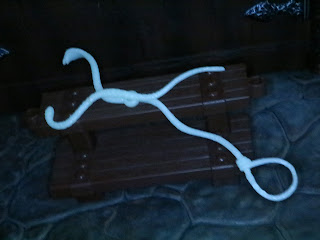 * Snakebite's bizarre staff also glows in the dark. It's a good, strong glow, too.
* Like most 1980s toylines, most Super Naturals figures came with a minicomic. I don't have it but packaged samples of Snakebite show that he includes a minicomic. 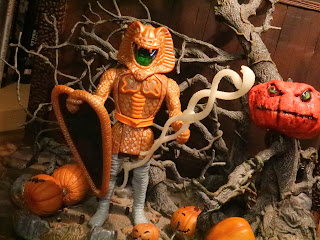 I had quite a few of the Super Naturals as a kid and Snakebite was always one of my favorites. Honestly, I really don't know why I ever got rid of these as a kid as they're just such cool looking figures. Snakebite is one of the best and has some incredible sculpting, a very eye-catching color scheme, and fantastic holograms. He's an Epic toy and a real gem from one of the many forgotten toylines of the 1980s. Why did Super Naturals die out too soon? Some say that the holograms were too expensive to produce. I think it could be due to the fact that there were too many of the Ghostlings and they were all extremely similar and I think it was harder to get attached to the Super naturals figures as they had holographic faces rather than a plastic face. If the removable chest plates went all the way up and served as a "face" that covered the holographic image underneath, I think these would have been more popular. As it is, they come off more as novelties rather than as actual characters. But that's just my thoughts. What do you think? Why did Super Naturals have such a short lifespan? Ponder that on this wonderful October day...
This is the first figure of Snakebite I've reviewed. For more Super Naturals reviews check out the following:
Burnheart