Minifigure Review: Faker from Masters of the Universe Eternia Minis by Mattel 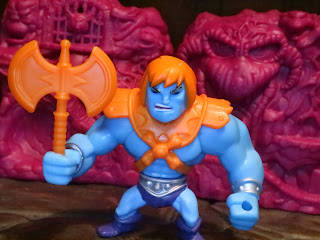 I'm just starting to make my way through the second series of Mattel's Masters of the Universe Eternia Minis and today we're checking out Faker, the evil robotic doppelganger of He-man. Faker was released in the 2014 series of Masters of the Universe Minis that were sold through MattyCollector (he was paired with Man-At-Arms there) but now you get a chance to get Faker on his own. Ready for a blue and orange evil He-man? Then join me after the break... 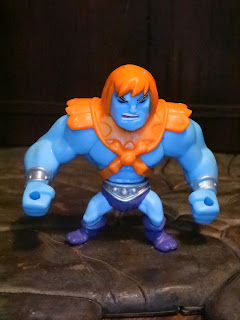 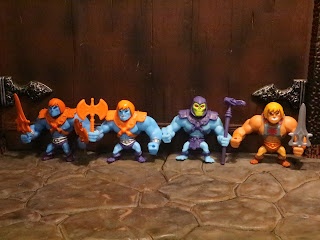 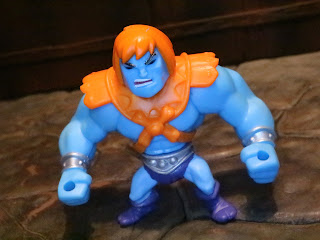 * Combine the body from Skeletor, the limbs of He-Man, and a new headsculpt, add in a wacky blue and orange color scheme, and you have Faker! Faker might be the greatest action figure repaint of all time and Mattel has captured him well in minifigure form. He feels very true to the vintage toy here, though heavily stylized of course. He really looks great in the style of this line. The massive jaw and musclebound proportions fit Faker quite well. 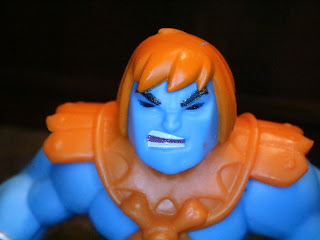 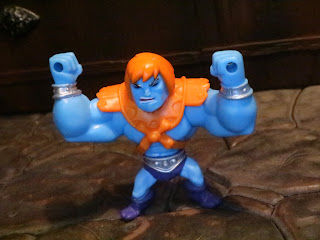 *  Most of these little guys have four points of articulation which may not seem like a lot except for the fact that they're only a little over 2 inches tall. That's not bad for this scale! They're very durable little figures and would probably fit in well with lines like Imaginext and the Hasbro Heroes figures, so if you have a little one who's into MOTU these could be some decent starter toys. They're fun to play with and have a lot of shelf presence! 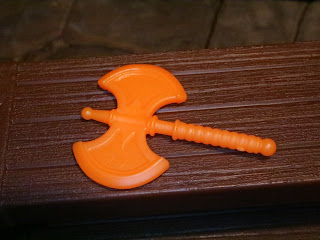 * Faker comes with an orange ax. It's the same as the ax that comes with Horde Zombie He-Man only, you know, orange instead of green. 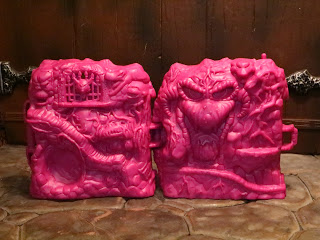 * The Eternia Minis come blind packaged but it's actually not a bad thing at all. First, there is a very prominent code on the bottom of the package identifying the figure inside (Faker is "A"), so you don't have to buy these without knowing what you're getting. Second, the packaging is a very cool plastic Snake Mountain. It actually separates in half and you can connect them with other Snake Mountains to make a long chain of evil. It's a cool sculpt and some of the best blind packaging I've ever seen. The detail is insanely nice on this! 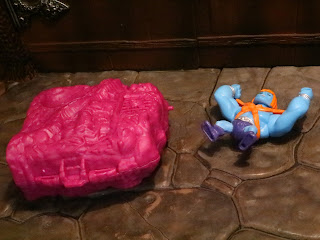 The Negatives:
* There are foot pegs on the top of the Snake Mountain display base but Faker, like Beast Man, just doesn't fit on top well. Is the problem with Beast Man or is it with Snake Mountain? I'm not sure but I've had a couple figures from series 2 who want to fall off the base pretty easily, so maybe it's an issue with the pegs on this series. 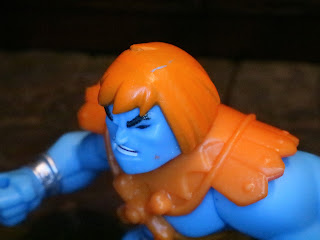 * Faker has some weird paint errors on his head. He's got some orange scuffs on his blue face and some blue streaks on his orange hair. It definitely hurts his overall look for sure. 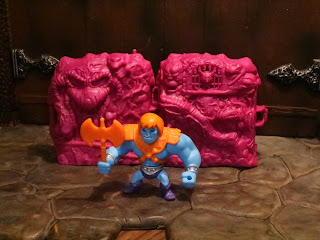 While he's not a new figure to the Minis scale (since Mattel did release him in the 2014 series) Faker is a popular character and it's surprising that Mattel made another version. This one isn't as good as the earlier figure, though he is less expensive. The paint errors and the inability to stand on Snake Mountain are frustrating, though. I've been noticing more little problems with the series 2 figures than the series 1 had. Maybe these ones got rushed out a bit? He's still a Good and a 1/2 minifigure, though, and hopefully you'll get one with better paintwork.

Are you a fan of the man known as Faker? Then check out my other Faker reviews:  The Mondo exclusive Faker, the M.U.S.C.L.E. Faker from the Series 3 Pack C, the Ultimates He-Man (which came with a Filmation Faker head), the Faker figural bag clip, the Mega Construx Faker from the Battle for Eternia Collection and Faker from Battle Bones, the Masters of the WWE Universe Faker John Cena, the ReAction Faker and Leo Faker, the Vinyl SODA Faker, and the VYNL Faker.