The Dawn of 31 Days of Toy Terror: Night Recon Predator from Aliens: Hive Wars by Kenner 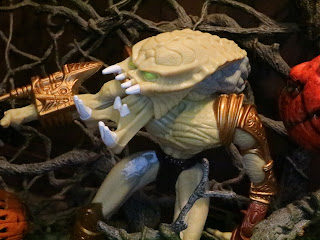 For today's installment of The Dawn of 31 Days of Toy Terror, a celebration of vintage "horror" toys from before the year 2000, I'm checking out another figure from Kenner's Aliens/ Predator releases from the 1990s, but today I'm checking out a figure from their final series of releases: The Night Recon Predator from Aliens: Hive Wars. Released to KB Toys in 1998, the Aliens: Hive Wars line (which came out after Kenner's 1997 Alien: Resurrection line) was a bit of a dumping ground for Aliens and Predator repaints and molds Kenner had produced but never released in the original lines. The Night Recon Predator was supposed to be released later in the Predator line, and the prototype for the figure is amazing,but Kenner at least took the mold for the figure (but sadly not the accessories) and released it in Hive Wars. Today we're taking a look at this very creepy Predator figure after the break... 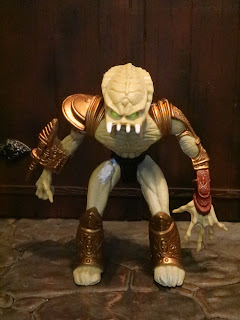 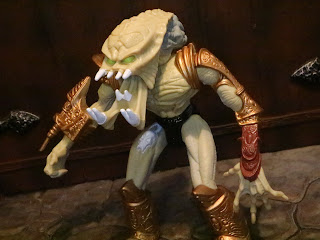 * The Night Recon Predator is easily one of my favorite Predators in Kenner's line. The oversized jaw might be a bit "unrealistic" but who cares, right? This guy looks really massive and frightening with cool details like the skull hanging from his belt and the elaborate armor. Honestly, he looks to me like Kenner's attempt at an Alien/ Predator hybrid. I didn't own this guy as a kid, only picking him up when completing my collection over the last year or so, but I sure wish I had owned him as a kid. 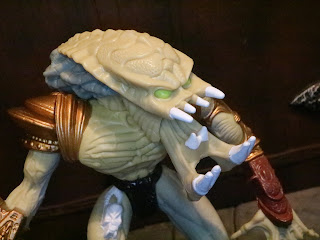 * Here's a better look at the Night Recon Predator's headsculpt. Doesn't the elongated cranium make you think of one of the Xenomorphs? Yeah, the Predalien shows up later in AvP: Requiem but this guy is reversed, being more Predator than Alien. The original figure would have had green skin but I do like the pale tan of skin of this guy, too. That jaw is crazy for sure! The lower jaw is actually removable but it doesn't seem to serve any purpose. Must have just been easier to mold it separately, I suppose. 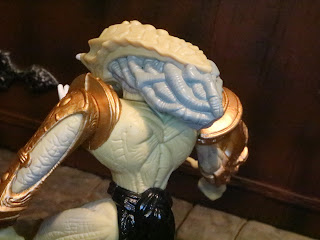 * The back of the headsculpt shows off the weird Xenomorph-like bulbous protrusion. Again, nothing in the prototype seems to imply that Kenner was going to market this guy as a hybrid but it really seems present in the sculpt. I'd love to know more about the intention of this figure. 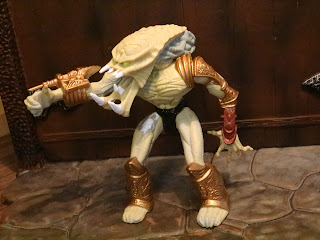 * Like most of the Kenner Predators and Space Marines, the Night Recon Predator has five points of articulation. He's durable and moves pretty well. While he's posed in a bit of a crouching battle stance he stands well and doesn't feel overly pre-posed. 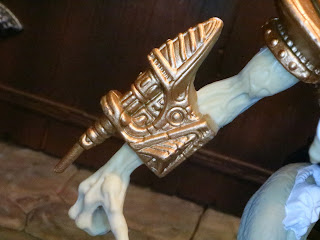 * The prototype figure was supposed to come with a rifle, a mask, and a bird-like creature, but for the budget Aliens: Hive Wars line Kenner didn't include any of those weapons. The best weapon is a sculpted part of the Night Recon Predator's arm and appears to be some sort of an elaborate laser cannon. I love it! It's crazy that the sculpted on weapons on most of the Predator figures are better than their included weaponry. 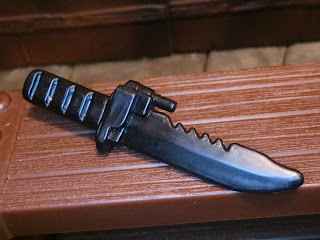 * The Night Recon Predator includes a large black knife that he can hold in his right hand. It has a serrated blade and some sort of little protrusion on the hilt. Maybe a flashlight or a laser pointer?

* The knife actually wasn't intended for this figure. It was actually made to to fit on the hip of the Corporal Hicks figure from the Hive Wars series. It's a shame Night Recon Predator didn't even get an accessory of his own! 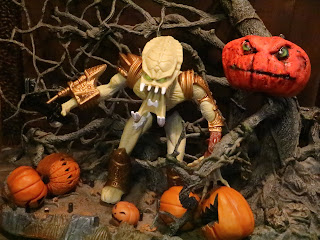 I absolutely love the Night Recon Predator as he's one of the best sculpts in the vintage Kenner collection. That being said it is still a real shame that his amazing accessories weren't included with the figure. The Night Recon Predator was released as a "budget" figure by Kenner through KB Toys who was usually overpriced to begin with (you had to wait for their sales) so you were getting less and paying more originally. He's a Good and a 1/2 figure and at least gives collectors a chance to own a figure that was once cancelled (there were some amazing Predator designs that never saw the light of day).