The Dawn of 31 Days of Toy Terror: Exploding T-1000 from Terminator 2 by Kenner 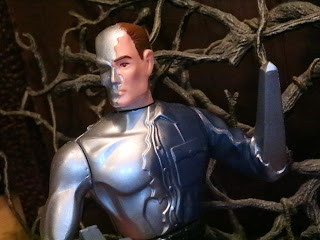 Since 31 Days of Toy Terror is focused on nostalgia this year I'm taking a look at a figure from Kenner's Terminator 2 toyline for today's daily dose of dread: Exploding T-1000. Under normal circumstances I wouldn't consider Kenner's Terminator 2 toyline a horror themed line but considering we're focusing on nostalgia for 2020 I had to think back to my childhood. Terminator 2 was one of the first R-rated movies I was allowed to watch and I remember being absolutely terrified of the scene where the T-1000 kills John Connor's foster parents. Seriously, when T-1000 drove his spiked arm into the foster dad's mouth my teeth were probably literally chattering! It was so intense and, even now, the scene gives me the creeps! So, how about a toy based on that figure? Kenner released a few different versions of the T-1000 in the original Terminator 2 line (and a repaint of this guy in the 1997 Terminator 2- 3D line) and the Exploding T-1000 was part of the second series of figures. Ready for a quick look at an old school (but still menacing) killer made of a mimetic polyallow? Then let's check this guy out after the break... 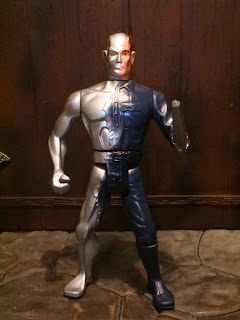 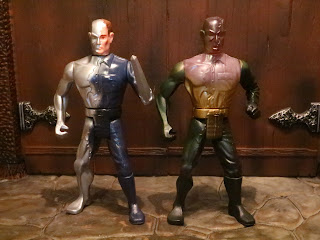 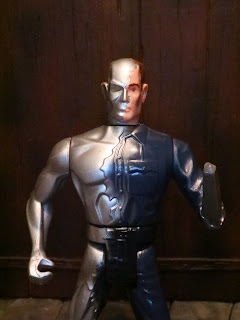 * While Blaster T-1000 (the first version of character released) didn't show off the face character played by Robert Patrick, this version does an admirable job, especially by early 1990s Kenner standards. To help the figure stand out and be a bit more "exciting" for kids (they were Kenner's target audience in 1992 rather than a 37 year old adult blogger in 2020) Kenner depicted the T-1000 in the middle of shifting into his police officer disguise. Half the body is silver while the other half is human looking. It's a pretty cool effect and while it doesn't hold a candle to later takes on the character by McFarlane or NECA, it was pretty cool at the time. The way Kenner sculpted the middle of the figure to look T-1000 was in mid-transition is a pretty neat effect. 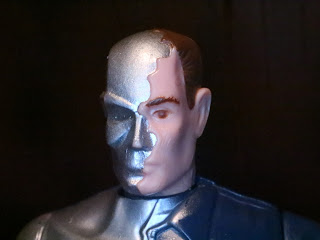 * The headsculpt also depicts the figure in transition and while the right half is the rather featureless, kind of Silver Surfer looking, liquid metal face of the T-1000, the left half shows the T-1000 in his Police Officer "Austin" disguise. There's not a lot of the face visible but what is here does do a decent job of capturing Robert Patrick's likeness. The stare is pretty intimidating! The hair isn't quite right, but overall it's a decent portrait of a character that had to be a challenge for Kenner to capture. 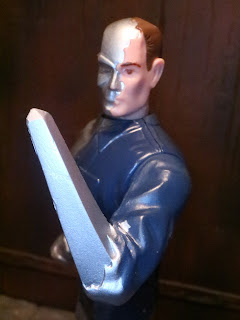 * The best thing about this figure is probably his super sharp left arm! OK, maybe it's not that sharp but it definitely gives the impression of the crazy metal spikes that the T-1000 used in the film. That is a terrifying feature of the character in the film and it is really cool to see the T-1000 rendered like this in a Kenner line. Honestly, I always thought a more plain T-1000 with swappable arms weapons would have been the coolest T-1000 Kenner could have made. 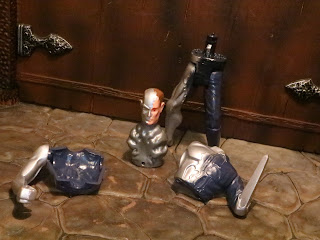 * Why is this guy called Exploding T-1000? Because he exploded, baby! The T-1000 used the same exploding feature as the Scorpion Alien from Kenner's Aliens line, which also came out in 1992. Kenner reused accessories, action features, and even entire figures, vehicles, and playsets often, which looking back is kind of charming. When you pressed the button on the back of the T-1000 he exploded into four pieces. It worked fairly well and did a decent job of mimicking how the T-1000 would bust apart and reform in the film. 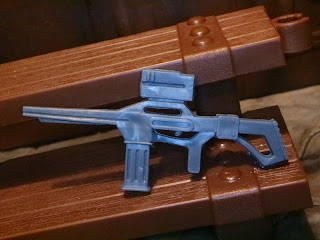 * Speaking of items reused from other Kenner toylines here is another: The T-1000's rifle originally was included with the RoboCop and the Ultra Police Headhunter figure. Headhunter's was gold but the T-1000's is a bluish gray. I actually really like this weapon design! While the T-1000 didn't really use a weapon like this it definitely reminds me of the Endo Battle Rifle used by the T-800s in the future. 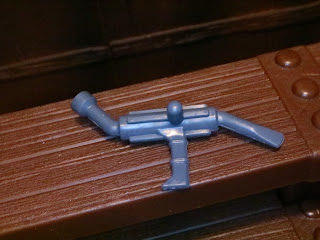 * T-1000 comes with both of the weapons from Headhunter and his second item is what looks like a high tech tire iron of some sort. I think Headhunter's package called this an Electro-Crowbar, so your guess is as good as mine as to how this functions. It's a weird accessory but, at the same time, it's another extra for the figure. I assume someone thought it was reminiscent of the tools the Terminator uses to repair himself. 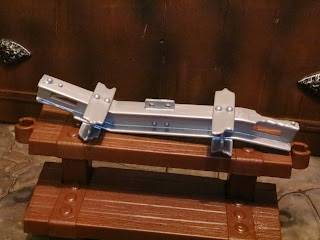 * The T-1000s metal girder accessory has always been a mystery to me, too. What was the intended purpose? Maybe it's supposed to be a piece of metal thrown haphazardly around at the Steel Mill where the movie's final battle occurs? There are two little holes in the top as well, so I assume you could use a string to hang it so the figure could swing on it. It's a cool looking piece; just a bit odd. But wait..... 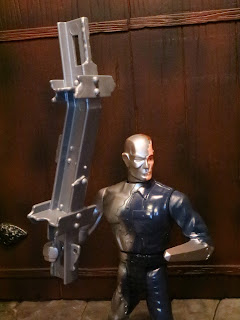 * After owning this figure for nearly 30 years I realized that there is a grip like section on the bottom. It turns out that the T-1000 can pick this up and swing it like a club! How crazy is that? 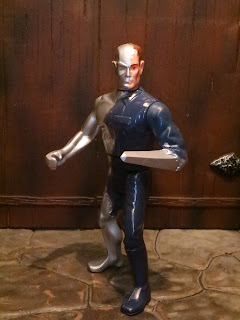 * Like so many of the Terminator 2 figures, the T-1000 is not just a figure with an action feature but a figure built around an action feature. While he has the same five points of articulation as most other figures in the line he does tend to feel very delicate. Move him the wrong way and he's going to explode.

* There are some little pins that help keep his torso halves connected to his waist. They're very delicate. This figure is a mixture of my original figure and a figure I purchased in the last year, so he's working fine now. Just be careful as there are some delicate parts here. 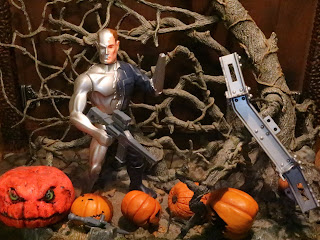 He's got a few flaws, sure, but overall the Exploding T-1000 is my favorite version of the character from Kenner's Terminator 2 toyline. The T-1000 is a pretty frightening presence and I definitely remember being afraid of him as a kid. Both he and Arnold's T-800 are pop culture icons. I mean, Robert Patrick even plays the same character in Wayne's World, Last Action Hero, and an ad for DirecTV. That's how recognizable his character was! Exploding T-1000 is a Great toy to add a bit more mechanical menace to your nostalgic toy shelf this Halloween!

This is actually the first T-1000 toy I've reviewed on the site!