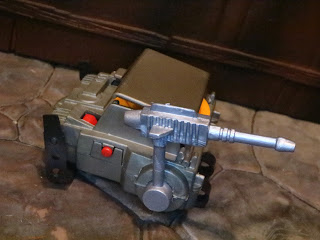 I'm enjoying the opportunity to explore some MOTU stuff that is more off the beaten path during JuNe Adventures such as today's Rocketdisc Power Pack from Mattel's 1989 He-Man line. While we don't see many accessories or accessory packs sold today for action figures (traditional doll lines like Barbie still get them, though), they were still regularly included as part of action figures lines until the early 1990s. The vintage Masters of the Universe line offered up a few accessory packs and items so it makes since that Mattel attempted to put some in the He-Man line as well. Oddly enough, they never made it to the United States and ended up being exclusive to Europe. The Rocketdisc Power Pack is intended to support the Galactic Guardians by adding some more firepower to their arsenal. Let's take a look at this accessory after the break... 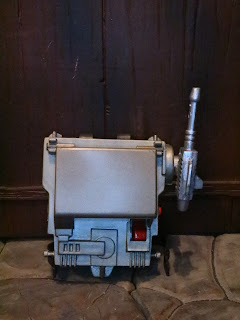 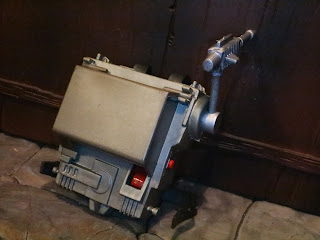 * At a glance the Rocketdisc Power Pack doesn't look terribly special. It's a standard looking gray, square shaped backpack with a few red buttons on it. It actually reminds me of one of the backpacks from Coleco's  Rambo: The Force of Freedom line. It actually manages to look quite cool on most of the Galactic Guardians, however, and apparently is designed to be used on its own as a stationary turret if needed. 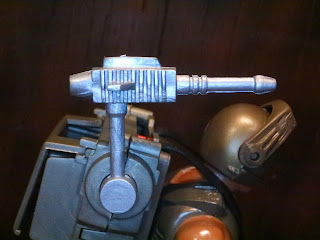 * My favorite part of the backpack is the "photon ray gun" that can swivel into position. It's a small laser cannon and it can nicely augment one of the Galactic Guardians' arsenals.

(Note: I've got Vizar rocking the pack right now because he is missing his laser and his grappling hook. If you have a spare to sell me, let me know! I want to complete Vizar as he was one of my favorites as a kid.) 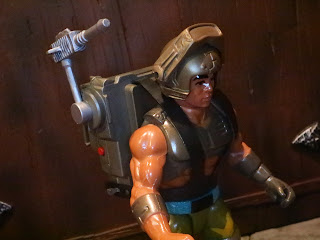 * The Power Pack attaches to the figures via a rubber strap. It's easy to put it on the characters and it stays on quite nicely. Heck, most of them can even stay standing upright while wearing the pack as well, so that's a real plus. 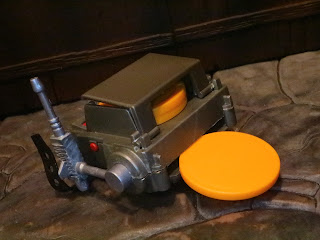 * The main feature of the Rocketdisc Power Pack is its ability to launch rocketdiscs. The disc slides into the slit on the pack (bottom right in this position) and launches out when you press the red button on the rear of the pack. This thing flies quite far and definitely packs some real punch! 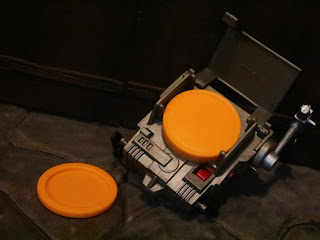 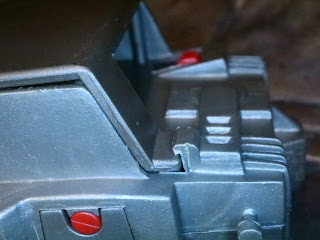 * The set comes with three rocketdiscs. They kind of look like pizzas but with nothing on them at all. They can be stored in the backpack, however. There is a storage door that opens and all three discs can easily sit inside.

* My only real negative with the Rocketdisc Power Pack is the way the door for the storage area closes. It actually uses a solid plastic hook and you have to kind of "bend" things to get it open. Whether you're bending the door itself, the pegs for the door, or the hook, you're still putting stress on the plastic somewhere which isn't desirable for an item like this. 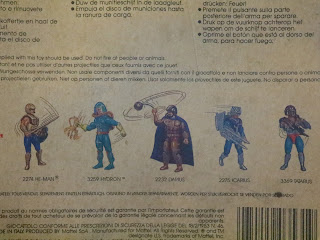 * I have the card back for the Rocketdisc Power Pack and guess what? It shows Darius on it! Darius made it to to the prototype stage and appeared on the cross sell art but he was never produced. I've heard two stories: One is that his action feature never fully worked and the other is that he was discarded because he was designed to be the wise leader of the Galactic Guardians, a role already filled in the cartoon series by Master Sebrian. Mattel did release Darius in Masters of the Universe Classics in 2016, however. 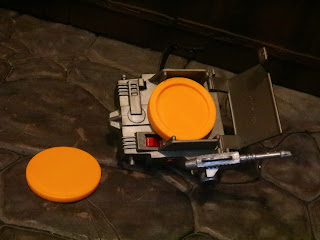 As accessories go the Rocketdisc Power Pack isn't the most exciting armament, although it still does have a few cool features to it. I like how the discs can be stowed away and I love the rotating laser gun. It would have been nice if the Rocketdisc Power Pack had some sort of base or something which folded out so it could be used as a stationary weapon, too. I guess you're just supposed to lay it on the ground. It's a Good and a 1/2 extra piece that doesn't seem to have a lot of demand but which is a fun curiosity in the line.

This is the only Rocketdisc Power Pack ever released. For more figures from Mattel's 1989 He-Man line check out the following: