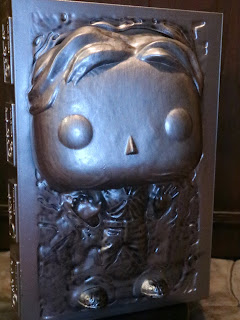 It's been almost 2 years since I last reviewed a Star Wars POP! vinyl but when I stumbled upon Han Solo in Carbonite at a GameStop, I had to pick him up. Star Wars is a franchise filled with iconic scenes and images but one of the most iconic scenes surely has to be Han and Leia's exchange in the carbon freezing chamber at Bespin. The music, the expressions on every face in the room, the lighting, the smoke, and of course the sound of the block hitting the ground to reveal Han's anguished face frozen in carbonite. This year is the 40th anniversary celebration of The Empire Strikes back and there's not a doubt in my mind that it's the greatest film in the Star Wars saga. Heck, it's easily one of the greatest films of all time. I was really hoping to see a special showing of the film accompanied by a live orchestra but Captain Trumps Covid-19 kind of out the kibosh on that. Still, no reason we can't watch the movie over and over at home in self quarantine while humming along right? Now my family will have a little Han Solo frozen in carbonite POP! vinyl to accompany us while we watch. He's incredible and definitely one of my favorite POP! vinyls already. Let's take a look at this one after the break and see if he's worth it, but of course you already know he is. You know you always need more scoundrels in your life. 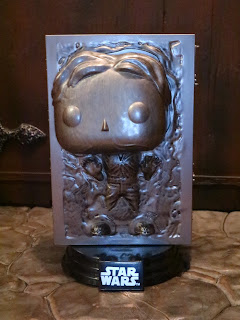 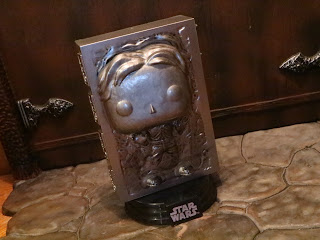 * This POP! vinyl looks just like...well, just like Han Solo frozen in carbonite. It's one of the most recognizable images in the Star Wars galaxy and Funko did an excellent job recreating it in the POP! vinyl form. The colors, the design, and the sculpt are excellent. This is just an amazing POP! vinyl to have around and it's one of those collectibles that even the POP! haters ought to appreciate. 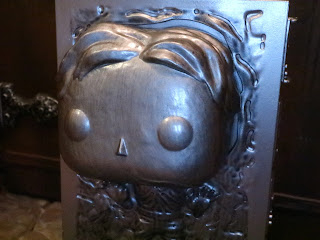 * Since the Star Wars and Marvel POP! vinyls legally have to be Bobble-heads so they're not considered vinyl action figures, Funko decided to articulate Han Solo's face. Yes, his face. The face wobbles a bit. It's not distracting at all and it still looks like what you'd expect a POP! Han Solo frozen in carbonite to look like. The anguished expression isn't there, since most POP! humans don't have mouths, but your mind kind of adds the expression their anyways. It's uncanny. 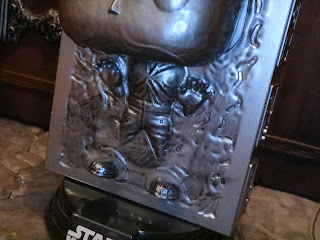 * The carbonite block is very nicely sculpted. I'm still disappointed that Hasbro hasn't re-released a Han Solo in carbonite in the Black Series (the original was included as an accessory with the original SDCC exclusive Boba Fett) but this guy feels kind of like a consolation prize. He's obviously not going to fit in with your Black Series but it's still cool to have an upright standing Han in carbonite. 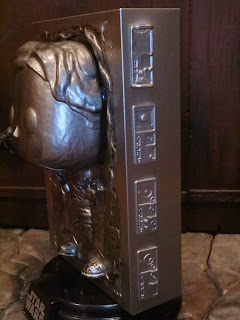 * Both sides of the carbonite brick have all of the various panels and monitors seen in the films. It's a cool detail and definitely makes this feel like an even higher quality product. 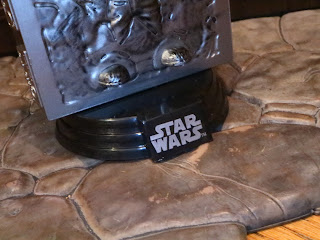 * Frozen Han comes with a stand like the other Star Wars POP! figures. Again, I love the look of these although this one is not removable. It still looks nice, and I use them with all my Star Wars POPs, so it won't stand out. I think they started making the stands non-removable about 2 years back as Count Dooku was the first POP! I remember who had one. 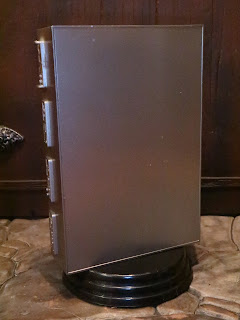 * Just for your information, the back of the carbonite block is flat. This isn't a big deal to me, although some of the prop replicas have shown a series of slats on the back. 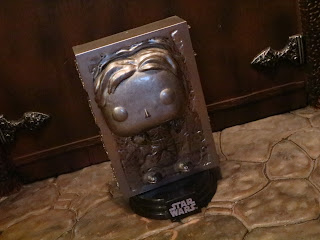 This guy might be my favorite Star Wars POP! vinyl released. He's just too cool! I love him so much and I'm excited to find a really cool place to put him. Funko continues to put out so many cool Star Wars POP! figures and even though I don't buy many, every now and then they still get me. This guy is Epic and I'm very tempted to get the upcoming Han and Leia two-pack to go along with it.

What's your favorite Star Wars film? Let's discuss it in the comments below!


Guess what? I've now reviewed so many Han Solo action figures that he gets his own review archive! Check out The Kessel Run for all of the Han Solo reviews you could ever want!