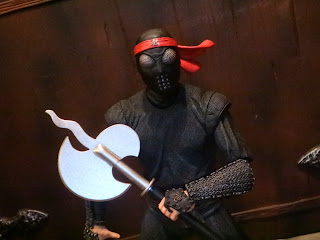 The 1990 film has long been one of my favorite (if not my favorite) incarnations of the Teenage Mutant Ninja Turtles and I'm thrilled that NECA's 7-inch figures based on the film are getting a bit easier to find. The distribution on this series through GameStop has been quite good as I've seen every figure in the series multiple times at at least 3 or 4 locations. Hopefully Walmart's distribution is as good later this year for the rest of the line (Walmart is very, very hit or miss with their exclusives). For series 2 of this line NECA has offered up two versions of the Foot Soldiers: One with Bladed Weapons and one with Melee Weapons. So far as I know both figures are the same except for the weapons so I ended up just grabbing one figure, going with the Bladed Weapons version simply because of the really cool ax. Let's check this guy out after the break and see if he possess the effort, discipline, and loyalty to earn the right to wear the dragon dochi... 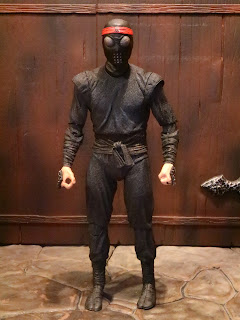 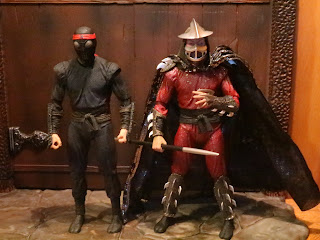 
* Guess what? The Foot Soldier (on the left) and Shredder (on the right) share the same body. They look incredibly different thanks to the paintwork and Shredder's abundance of blades, but they actually have the same base body and limbs. Crazy, huh? 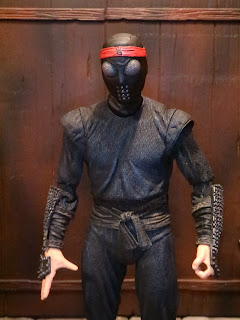 * The Foot Soldier is a scaled down version of the Quarter Scale figure and, man, does he look incredible. While he shares the same body as Shredder the fact that the Foot Soldier is clothed in all black definitely makes him look completely different. It's a very menacing appearance and it reminds me why this has always been my favorite rendition of these guys. It's very basic, yet also very well designed. He's also got an actual piece of fabric around his mid-torso that mixes with the sculpted belt. 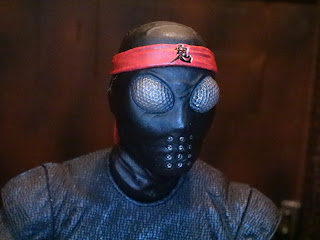 * The headsculpt is fantastic. I love the insect-like eyes on these guys. As a kid I remember being a bit shocked by how different the Foot Clan looked in the film from the toys and cartoon, but I've really come to love the design over the years. Of course, he's also sporting the dragon dochi headband. I really love the look of it. 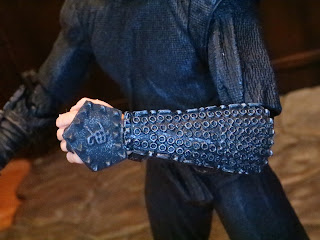 * The Foot Soldier is also sporting these removable bracers on his forearms. They look quite well worn but still seem to be quite effective, too. They fit over his forearms perfectly and mesh well with the portion of the bracers that are permanently attached to the hands. 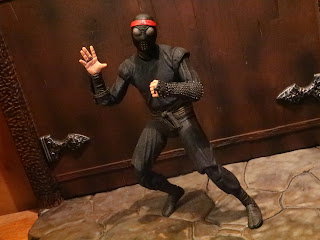 * Like the Shredder, the Foot Soldier is quite well articulated. We're not talking Marvel Legends level or anything but he definitely moves quite well with lots of joints. Most importantly, most joints (especially the head, neck, and waist) have great ranges of motion that allow for some very expressive poses. 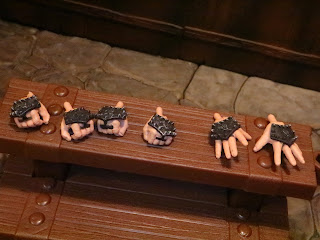 * The Foot Soldier comes with three pairs of hands: A pair of standard grips for holding weapons, a pair of fists, and a pair of open expressing hands, intended for delivering messages no doubt. They swap easily and allow for lots of variations in the look of your Foot Soldiers. Have any of y'all started army building these guys? Let me know as I'd love to see your collection! 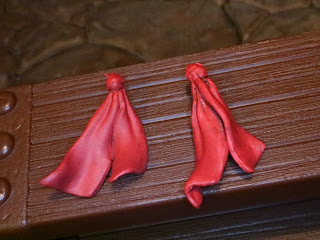 * The Foot Soldier also comes with two removable tails for his headband. I'm not sure that this really seems to be a necessary inclusion but if you were army building these guys, I guess this would add another level of variation to the ranks. 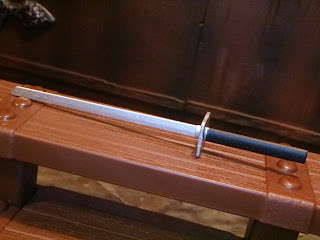 * Since this is the version of the Foot Soldier that comes with bladed weapons a katana is absolutely included. It's different than Leonardo's katanas with a smooth handle and a medium length, straight blade. 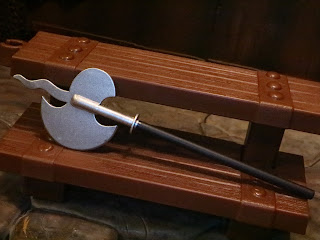 * Next up is this awesome ax. I remember this from the scene where the Foot Soldier's attack April O'Neil's apartment and it's definitely the reason I selected this version of the Foot Soldier over the Melee Weapons version. The blade on this actually looks sharp, don't you think? 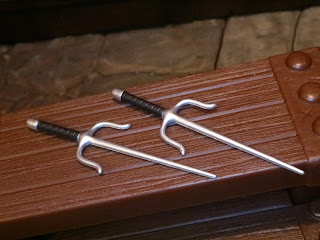 * Lastly, the Foot Soldier comes with a pair of sai. I don't have a 7-inch scaled NECA Raphael yet, but when I get one it'll be great to have Raph challenge this guy to a sai fight. I know Raph will cream him! 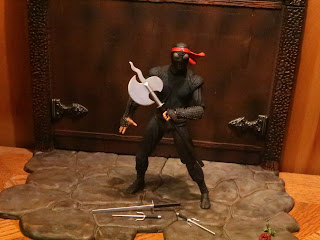 The Foot Soldier turned out really, really well. He's got a nice assortment of accessories, a great sculpt, and he's very fun to pose and play with. He's not as flashy as Shredder but he's equally as good with no real flaws at all. This guy's an Epic figure and another example of the fine work that NECA nearly always does. Now I really, really want a Tatsu. Please NECA! Please!!! Who will tell these guys when it's time to "Ninja Vanish!" without Tatsu?

If you're looking for more Foot Soldiers, the only other one I've reviewed is the Foot Soldier from the 2014 film.