Old School MOTU: Snake Teela from Masters of the Universe by Mattel 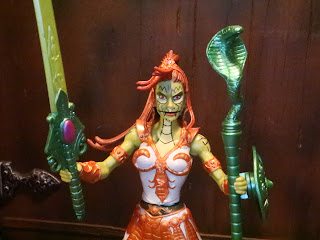 As I'm continuing to narrow my collecting focus you're going to start seeing more and more reviews of older Masters of the Universe stuff. I've been selling of some stuff here and there and picking up some pieces I've been missing from the excellent 2002/ 200x Masters of the Universe toyline. Mattel released quite a few boxed exclusive figures during the short run of the line and, just offhand, I think Snake Teela is the last of those boxed figures I was missing. She's not a terribly expensive figure by any means, but she's not a dime a dozen, either. In the second season episode of the MYP cartoon series "Second Skin" King Hsss uses the Serpent's Ring to turn a number of folks, including Man-At-Arms, Mekaneck, and Teela into Snakemen. While Masters of the Universe Classics features a Snake Man-At-Arms figure (which, if I recall, was kind of less than popular), the earlier 200x line ToyFare magazine offered up Snake Teela as a mail-away exclusive. It's definitely one of the more interesting variants from the 200x series, so let's check Snake Teela out after the break... 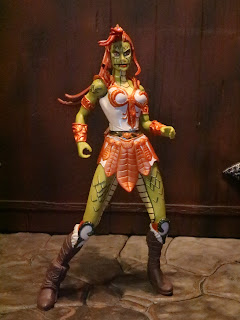 Original Retail Price: No idea. Do you know? 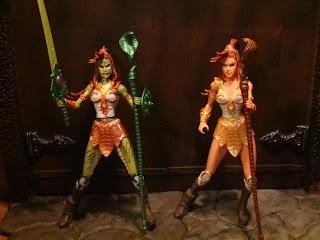 
* While she looks incredibly different, Snake Teela is simply a repaint of the standard Teela figure from the first series of figures. She includes the same accessories, too, although they've been given a cool green paintjob. 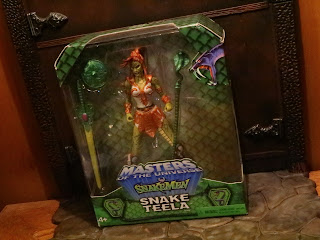 * The exclusive figures from the 200x line all come in really cool little window boxes (nearly 10 years before window boxes became the industry standard for 6 inch action figures). They're quite collector friendly (other than the plastic bands), so you can take these out and put them back in for display if you wish. 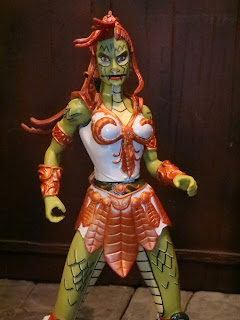 * Teela looks amazing. I really like the 200x Teela figure as she was a fantastic, modern update to Teela. I really wish MOTUC had included a 200x styled Teela at some point. This figure takes the standard Teela, gives her armor a darker paintjob (with more details), and gives her green, scaly snake skin. Yeah, the snaky detail is simply painted on but it sure does look good. She's very bold and colorful, almost possessing the "cel-shaded" look you see in some video games. 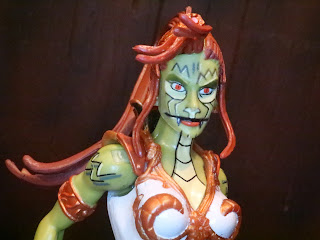 * The headsculpt is the same too, though the paintwork really makes Teela look quite different. Seriously, it's a fantastic paintjob, even 16-17 years later. This figure really surprised me by how cool she looks in hand. 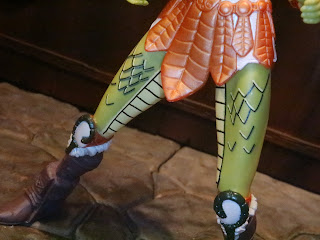 * The snaky design extends down to Teela's legs. She also has more elaborate paintwork on her kneepads, which is a nice touch. 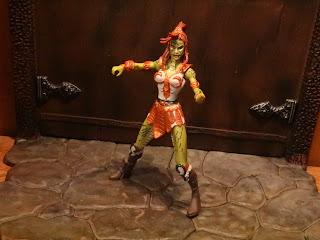 * The 200x figures aren't wildly articulated, but for the time the H-hinged hips and swivel/hinged shoulders were pretty cool. She also has a traditional spring-loaded waist. No button or lever is needed here to make Teela swing at her enemies! 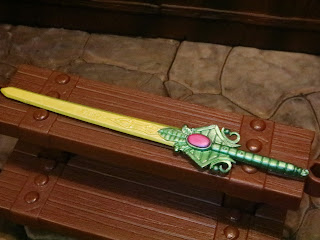 * Teela's sword is very cool. Since the vintage Teela had snake themed accessories, the 200x continued that with the accessories. The sword has a really cool detailed blade with a scale like hilt and handle. 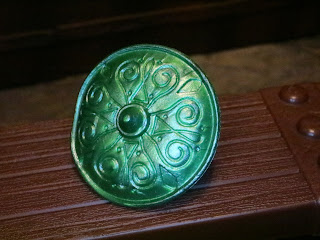 * Teela's buckler is very similar to her vintage shield. it's cast in green here and features a rotating handle that clips onto her forearm. 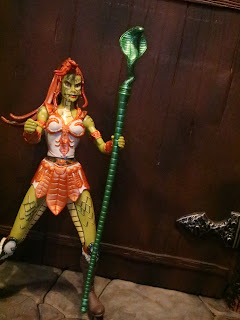 * Snake Teela also includes her snake staff (it wasn't known as the Staff of Ka until MOTUC), again molded in metallic green. It's actually made from two pieces as the cobra headpiece can rotate. It doesn't serve a purpose other than presumably aiding the manufacturing process. 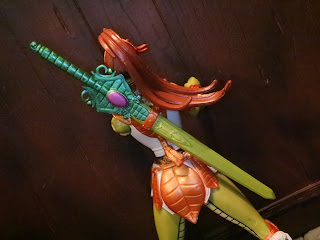 * Teela can hold all of her accessories but if you need to give her a free hand you can stow her sword away in the sheathe on her back. 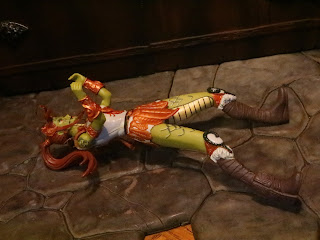 * If you've ever owned the 200x Teela, then you know that she's tough to keep standing up. She's a little bit peposed and is kind of leaning to the left a bit, so she tends to fall over. For longer term display, use a stand for her. 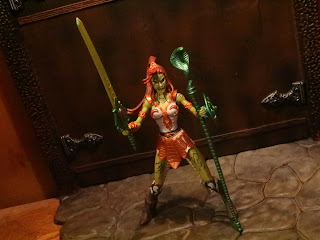 Snake Teela is definitely one of the best variant figures in the 200x line. She adds to the ranks of the Snake Men (who had a pretty small showing in the 200x line, though they did better than the Evil Horde at least) and really stands out. Her colors truly pop and she's sure to be a fascinating point of conversation.....if you show her to someone who cares, I guess. I care, and if I came to see your collection and you had this figure I would totally ask you about her. Seriously, she's quite nice and makes for a Great and a 1/2 Teela variant. 200x had Snake Teela, MOTUC had Snake Man-At-Arms, so maybe MOTU Origins should offer us Snake Mekaneck?


Was Teela one of your first loves? If so, check out my reviews of a few Teela toys such as the M.U.S.C.L.E. green Teela and the standard M.O.T.U.S.C.L.E Teela, the Mega Construx Teela from the Battle for Eternia Collection and Teela from Battle Bones, the ReAction Teela (Shiva), the neo-vintage Teela and Frozen Teela, and Super7's Ultimate Teela.

For more figures from the 200x Masters of the Universe line check out the following:
Heroes Vs. Villains Gift Pack #1
Keldor