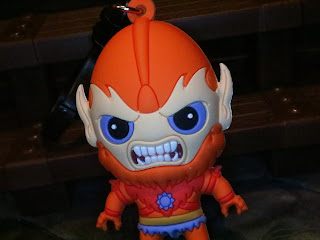 I reviewed Skeletor on Tuesday so today let's check out his number #1 lackey, Beast Man! Beast Man is for sure one of the A-List Evil Warriors and you can always count on him showing up alongside of Skeletor to cause some travel. His distinctive orange, red, and blue color scheme really stands out in this style and makes for an attractive looking bag clip. What are y'all using these for, anyways? I just have mine on display. I screwed some hooks into the front edges of one of my display cases and now have these guys lining it. It looks pretty good, really! Now I get the pleasure of putting ol' Biff Beastman/ Raqquill Rqazz on the shelf. Let's check this little Beast Man out after the break... 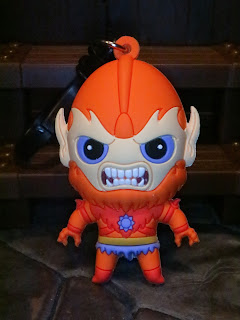 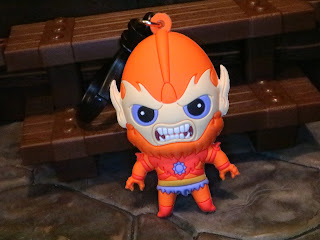 * Beast Man is large and in charge, baby! Seriously, he's a bit taller than most of the other figures in the series. Not much, but his pointy head is definitely a little taller. I really like the detail and how it is etched into the figure. Beast Man's fur collar and medallion really stand out here but the real winner is the face sculpt. Just check out those eyes and teeth! Savage, man! 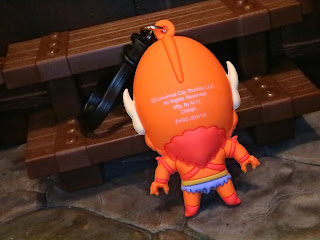 *  Rather than having a metal key-ring, these figures have a plastic clip. They're marketed as bag clips, so I guess the intention is to display them on a backpack or satchel of sorts. From the back you can see the bag of Beast Man's furry collar along with his arm spikes, too. 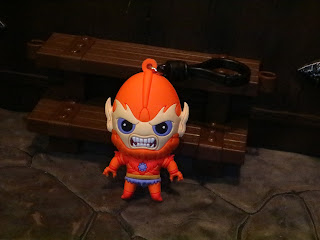 Beast Man is another really nice "Figural Bag Clip" in this series. I love how colorful and fierce he looks! He's definitely in the top half of the figures in this series and I'd gladly give him a Great rating. These are fun little trinkets for sure. I'm not wild about the blind bagged nature of these, but I've now managed to acquire the full series. Well, except for She-Ra, who was exclusive to a convention last year. Why the heck is She-Ra always an exclusive? Dorbz, POP!, 200x, the upcoming Origins, Rock Candy, etc.
Always exclusive! Anyways, Beast Man isn't, and he's fairly easy to find. Scoop him up!


For more Masters of the Universe: Figural Back Clips check out the following:
Evil-Lyn
He-Man
Mer-Man
Prince Adam
Skeletor
Stratos
Posted by Barbecue17 at 3/26/2020