Minifigure Review: Skeletor from Masters of the Universe: Mega Construx by Mattel I told you I was going to roll through the rest of this series! Today I'm checking out the new Skeletor Mega Construx figure from the Masters of the Universe line. This is the fourth unique Skeletor release in the Mega Construx line so far (the original figure from 2017 and the figure from the Battle for Eternia Collection are the same). The first two releases remind me more of the Masters of the Universe Classics Skeletor while the figure included with Castle Grayskull seems more inspired by the vintage toy or the minicomics. Due to the colors here, and the Havoc staff, I'm pretty sure this is intended to be the Filmation version of the Evil Lord of Destructon. Let's see how this guy stacks up alongside the rest of the Skeletors after the break... 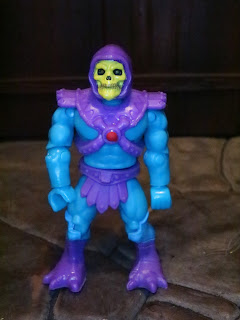 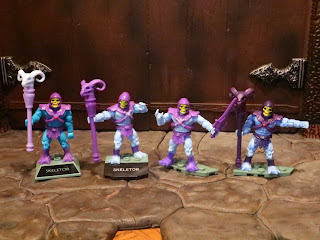 * Just for fun here's a look at all four different Skeletors lined up. From left to right you have the new Filmation inspired Skeletor, the original release/ Battle for Eternia Collection Skeletor, the Wind Raider Attack Skeletor, and the Castle Grayskull Skeletor. These guys all share the same body and the Havoc staffs all are assembled the same way. The colors are the biggest difference between the figures. 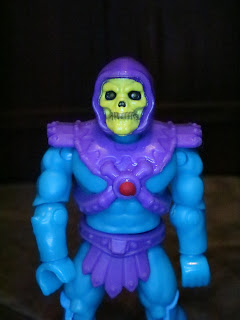 * Skeletor looks really cool. I love the very deep blue skin an the brighter, more vibrant armor. When I first saw this guy's deep blue skin I was reminded of the Leo Toys Skeletor. This little guy looks great and while he's not my favorite of the released Mega Construx Skeletors so far, he's quite good and really stands out. 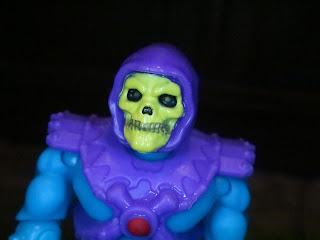 * For being really, really small the paint on Skeletor's skull is really, really good. This guy doesn't have red eyes or any green mixed in like the other figures. He's just rocking the straight up yellow skull with black holes. This is fantastic work for such a tiny figure! 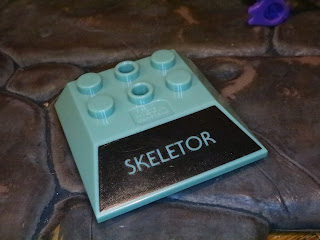 *  To help display these, each figure includes a stand. The stands are different than the ones included with the Mega Construx Heroes figures and are now just one solid piece rather than being made of three pieces. 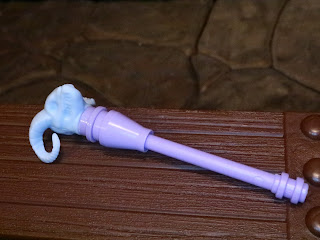 * Three of the Skeletors released include his Havoc Staff which is made out of five separate pieces.It's built like the rest of them, although the paler ram skull piece definitely reflects the Filmation look for this weapon. 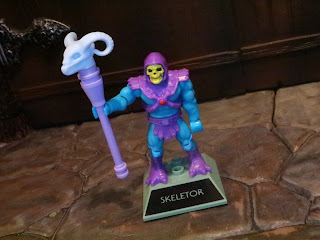 Skeletor is a Great and a 1/2 figure, making for another fine minfigure in this line. I really like him, although I do hope Mattel pays attention to how many variants they are putting out. Other than Prince Adam, everyone else in the first series is really just a repaint/ redo of a previously released figure. The Mega Conxtrux line seems t be sticking due characters that can easily share body parts but, hopefully, they'll soon be more willing to get a bit more unique. The line can't thrive on the same few characters over and over!


I've reviewed so many action figures of Skeletor/ Keldor that he has his own review archive. Check out Snake Mountain for all of the Skeletor reviews you could want!