Old School MOTU: Skeletor #19 from POP! Television: Masters of the Universe by Funko 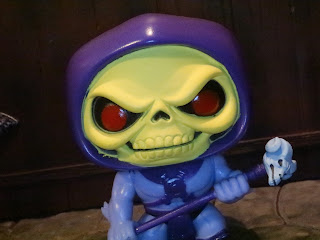 Since they released He-Man you just know that Funko had to release Skeletor! In 2013 Skeletor was released alongside of He-Man in the POP! Television: Masters of the Universe range. The original 2013 releases consisted of He-Man, Skeletor, Hordak, She-Ra, and.... Spikor? Yup, Spikor got a figure as part of the first releases. That's kind of crazy, right? Anyways, Skeletor was released in two other chase variants (a Gemini Collectibles glow-in-the-dark variant, and a SDCC "Disco" variant, both limited to 480 pieces) but this is the basic version of Eternia's main malevolent menace. Let's check out Skeletor #19 after the break... 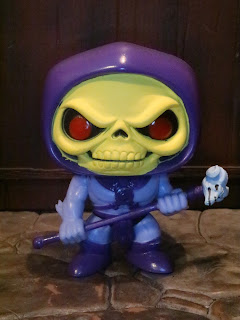 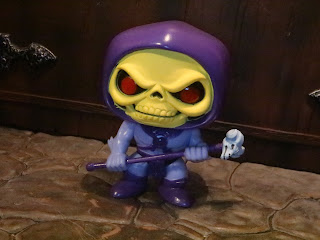 * Like He-Man, Skeletor also has a bit of a "ready for action" pose to him. Having the vintage MOTU figures look like they were ready for battle was a key part of the line's design and Funko's style on these POP! vinyls definitely mimicked that nicely. With his knees bent and his Havoc staff at the ready Skeletor looks like he's ready to bound into battle! With the swivel head you can also tweak his pose a bit, too. 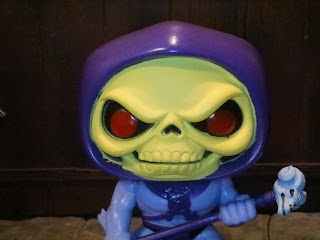 * Funko released a new Skeletor headsculpt in 2017 with the Battle Armor Skeletor #563 POP! but this version features the original, simpler headsculpt. POP! vinyls work best when they're instantly recognizable and Skeletor, as always, is instantly recognizable. Seriously, there is no one else this guy could be! The red eyes were a great choice here and the bright yellow still brings the Filmation vibe that most of us love so dearly. 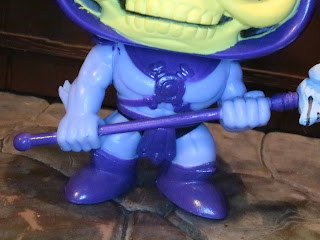 * While the sculpting is simpler than on more modern POP! vinyls, Skeletor's armor is still quite nicely done. While the figure looks very Filmation inspired overall, Skeletor does have the inhuman "fin" arms here, just like the vintage toy. 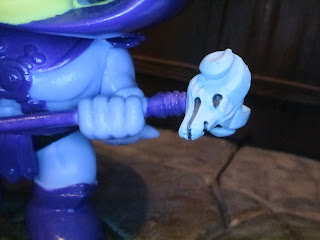 * The Havoc staff is nicely detailed and the ram skull on top is given a lighter blue paintjob, another detail inspired by the Filmation Skeletor. 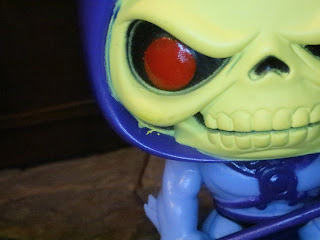 * While most POP! vinyls are quite neat and clean these days, some of the older ones have some rougher paintwork. Skeletor does in a few places, most noticeably on his hood.

All of the 2013 MOTU POP! figures are fairly pricey to obtain, so based on their rarity they're quite desirable. Skeletor isn't a bad figure though his paintwork is a bit sloppy and distracting at times. He's not terrible though, and I'd still say he's a Good and a 1/2 POP! vinyl, but if you're just casually looking for a POP! Skeletor for your desk or something you might want to check out the Battle Armor variant or hold off for the new version to be released later this year. This guy routinely sells for around $120-$150 in the box, so he's not a cheap pickup. But anythign MOTU rarely is these days.