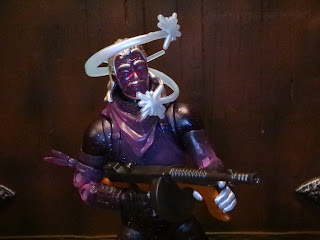 Galaxy is the third figure in the latest series of Jazwares' Fortnite: Legendary Series action figures and today I'm checking him out. Off the bat, I gotta say that this is a figure that looks way cooler in hand than in photos. The in-game Galaxy skin was offered as a Samsung Purchase Bonus for a week or so in August 2018 if you bought a Samsung Galaxy Note 9 or a Galaxy Tab S4. I assume those are phones but not having a smart phone, I really can't tell you much about them. I can tell you that Galaxy seems to be a cool, cosmic, celestial being whose tagline is "Victory is written in the stars." That's pretty similar to one of Stardust's catchphrases back in 2014 and 2015, right? Let's take a closer look at Galaxy and see what this combat constellation has got going on. More after the break... 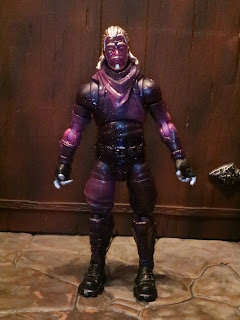 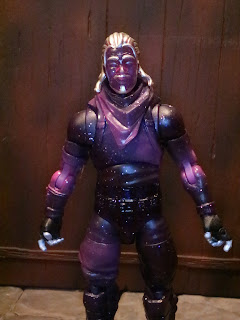 
* While Galaxy uses a number of body parts from other characters, the execution of the figure is so unique that he'll definitely stand out on the shelf. Galaxy is molded in a very sparkly purple plastic with glitter mixed in. Some parts of the figure are even translucent, giving him a rather swirly, celestial appearance. I love the unusual appearance of this guy! 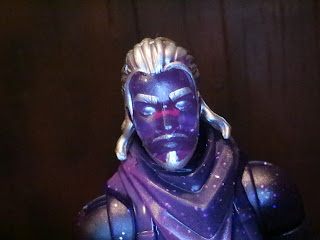 * Galaxy contains three interchangeable face plates that can pop on and off to give him different expressions. He's got shoulder length, slicked back silver hair and matching facial hair. The face plates are translucent as well, further adding to the ethereal quality of the figure. The first expression is rather neutral, or maybe just a bit serious. 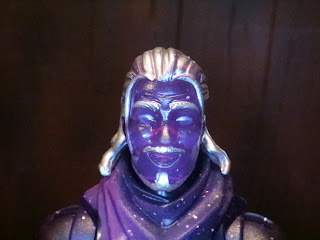 * The second face plate depicts Galaxy laughing. This one's my favorite as there's something about it that reminds me of Jeff "The Dude" Lebowski. Or Zaphod Beeblebrox even. He just seems like a happy, go luck guy. I dig it. * The surprised expression is pretty funny too. I'm not sure what's going on that's giving Galaxy quite a shock but the expression looks great. I love the silver eyes. 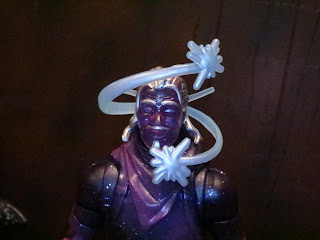 * To give Galaxy even more of an intergalactic (planetary, planetary, intergalactic) feel the figure has this cool little cosmic swirl effect that plugs into the back of his head. It's an interesting feature that fits in quite well with the cartoonish and slightly exaggerated aesthetic of the line. 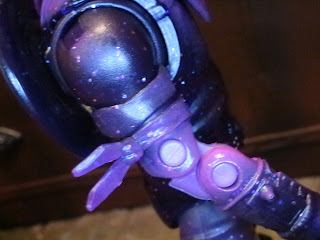 * Most all of the Fortnite figures have a bandanna tied around the right bicep but Galaxy's is actually a separate piece. It's rubbery and you could probably take it off you wanted to. 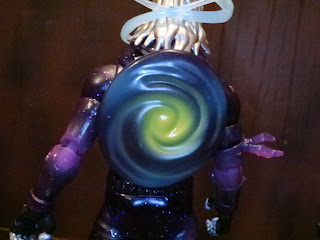 * Galaxy's Bag Bling is called the Galactic Disc and it's some kind of cosmic whirl. In-game it was also part of the Samsung Purchase Bonus set, so it's meant to go along with Galaxy. It's kind of cool. Like a swirling, cosmic body attached to his back. 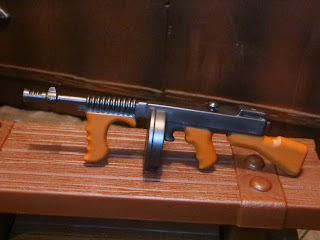 * Galaxy comes with a Thompson submachine gun with a drum magazine, which the game calls the Drum Gun. While the detail follows the more minimalist aesthetics of the Fortnite line, this still is a pretty cool replica of the Tommy gun, AKA the Chicago Typewriter. The paintwork is quite nice on this one! 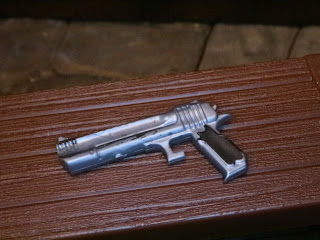 * Galaxy's second firearm is the Hand Cannon, a Desert Eagle styled pistol that has come with a few previous figures. It's another solid sculpt. 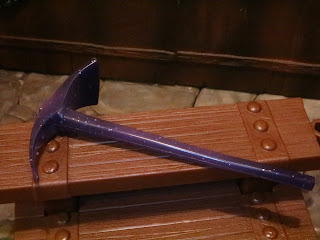 * Galaxy's harvesting tool is called the Stellar Ax. It's the same pickaxe that Jonesy comes with, although it's now molded in a translucent plastic with glitter, matching the figure. 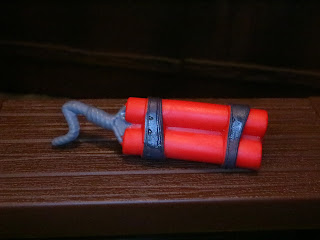 * Like the other figures in this series, Galaxy comes with dynamite. Why does everyone in this series include dynamite? Who knows! It's pretty cool to have a massive stash of 1/12th scale dynamite now, however. 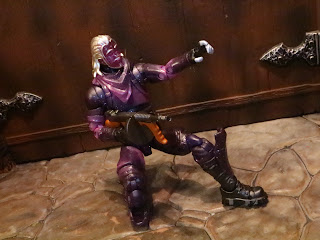 * Like the rest of the line, the Fortnite: Legendary Series has excellent articulation. These are sturdy, durable toys that are meant to be posed and played with. They can take lots of great poses and Galaxy can hold his Tommy Gun two handed with ease. 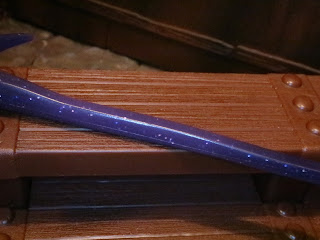 * Just like with Jonesy's pickaxe, Galaxy's is oversized. It is incredibly difficult for the figure to get a grip on this.

*Of course, Galaxy has the hinged hands like every other figure in the line. I'm just not a fan of the design and it makes holding accessories quite frustrating. 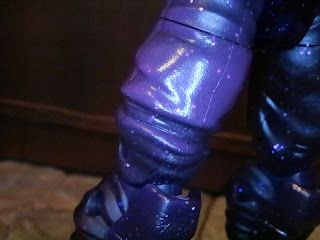 * Galaxy has a weird indention on his right leg. My guess is that the leg is reused from a figure who had a pouch or strap there. Since Galaxy doesn't have anything there it just looks weird. 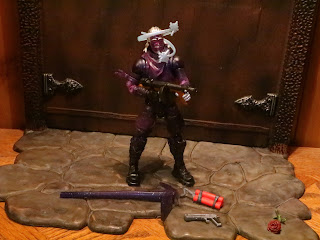 Galaxy turned out to be a really cool figure. I wasn't at all familiar with him and, like most of the Jazwares Fortnite stuff, he just kind of showed up out of nowhere. With some cool accessories, interchangeable faces, excellent articulation, and a really cool cosmic purple color scheme Galaxy is another excellent figure in this line. He's fun, creative, and a Great and a 1/2 figure. Track him down! He's definitely unique for sure.