Toy Review: She-Ra from She-Ra and the Princesses of Power by Sonic/ C3 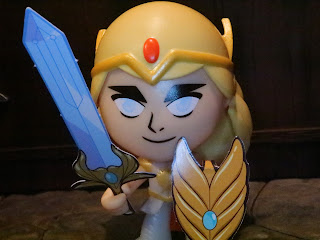 I'm not the biggest fan of Sonic Drive-Ins but you better believed I showed up there when I learned that they were going to feature She-Ra and the Princesses of Power. I stopped by one on my lunch break and ended up getting two sets of 5 of the 8 available items for me and my daughter. These are based on the Netflix/ Dreamworks series, so they're not going to be everyone's cup of tea, but I like them. For me, there was something pretty amazing about being able to go to a fast food joint and order some She-Ra toys. While I was there they also had an announcement playing that talked about the Wacky Pack kids meals which features the announcer saying "For the Honor of Grayskull." Pretty surreal, really. The first figure I'm checking out is She-Ra herself. She's a stylized plastic figure, kind of like a Funko POP! or one of the original Hasbro Mighty Muggs. Let's check out She-Ra after the break... 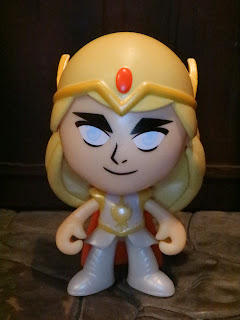 Accessories: Cardboard sheet with punch out cardboard sword and shield. 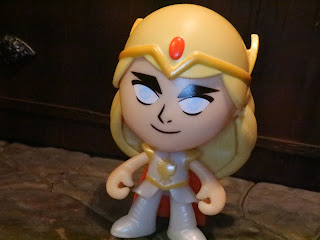 * Let me say that I had a really hard time getting my camera to capture Adora's eyes. They're very light blue and painted on, but they're absolutely there. In person her face looks just fine and the eyes are noticeable. That being said, this really is a cool little figure. I'd say that she's way nicer than many other fast food toys and she definitely captures the style of She-Ra and the Princess of Power. Her body is molded in a pearlescent white plastic with gold paint apps and a red cape in the back. 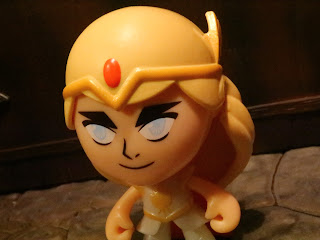 * The head is oversized (definitely part of the stylized nature of the toy) and has her facial features printed on. Not everyone likes the art style of the cartoon but I really think C3 (the company who apparently designed the toy) did a good job capturing the facial features. 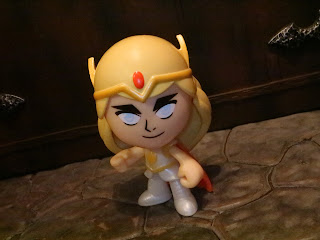 * She-Ra has swivel shoulders and a balljointed head which means she's more articulated than a POP! vinyl. My 6 year old really likes her, so that's a testament that this is probably a pretty solid fast food promo. I kind of wish the whole set had been figures like this. 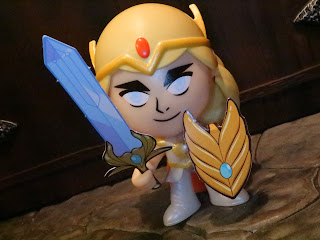 * They're cardboard (again, fast food promo) but She-Ra's Sword of Protection and shield are nicely printed. The figure can hold them just fine. 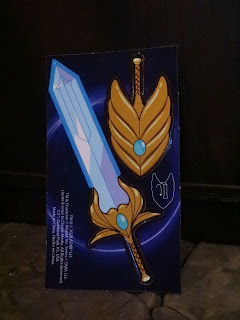 * I do kind of wish the weapons had been plastic. Even unpainted plastic, or just one weapon, would have been preferable to cardboard. I'm sure mine will be just fine but I can see my daughter's getting torn up pretty quickly. This thin cardboard is fragile, especially with those thin handles. 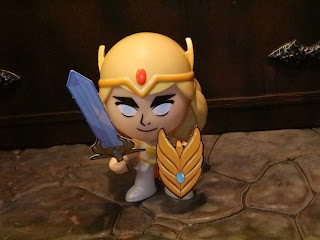 She-Ra is really a pretty cool fast food promo, especially considering she comes included with a meal or can be purchased on her own for around $1. The cardboard weapons are kind of a bummer but it's tough to be too harsh on this. I mean, it's a fast food She-Ra item. How cool is that? Seriously, what an age we're living in right? She's a Great little oddity for your collection! Wa to go Sonic! I'm going to be reviewing at least four more toys from this series (I'm missing the magnets, inflatable sword, and the all black Hordak figure) so stay tuned!

If you're a She-Raver who digs She-Ra/ Princess Adora then check out the figures I've reviewed: The Masters of the Universe Classics Galactic Protector She-Ra, the Club Grayskull She-Ra, the ReAction She-Ra, the She-Ra from the Super7 Battle for Etheria 2-Pack, the 1/6th scale Starburst She-Ra, the M.U.S.C.L.E. slime She-Ra, and Mattel's She-Ra and the Princesses of Power She-Ra, Force Captain Adora, She-Ra vs Shadow Weaver, and Battle Armor She-Ra and Swift Wind.