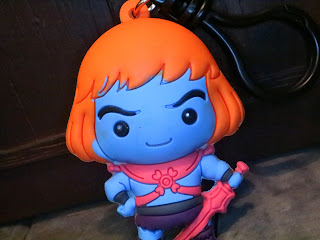 I love Faker! While he was designed to be a simple repaint of He-Man utilizing Skeletor's armor and a sticker, he definitely has evolved into his own... well, Faker really hasn't ever got a lot of attention in media, so who's to say what he is? He appeared in one episode of the Filmation series, never appeared in the MYP cartoon, and has had random parts in various comic books. Like so many Masters of the Universe characters, Faker is popular simply because of his cool aesthetic. While you might think he'd be a simple repaint of the He-Man bag clip, Faker does have Skeletor's armor, so it's definitely a different mold. There's something else unusual about this Faker clip: He's actually sporting the magenta armor and sword from the vintage cross sell art! That's a pretty cool detail that definitely makes Faker stand out even more here. Let's check out Faker after the break... 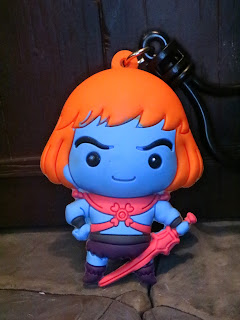 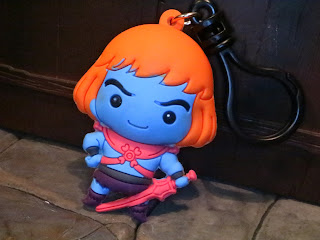 * OK, Faker really does look just like a blue version of the He-Man clip, although the armor is completely different. I love how these little guys look: They look like what a cartoon strip version of Masters of the Universe might look like that was targeted towards kids. Or Scribblenauts. They kind of look like the Scribblenauts characters, don't they? The details are "etched" into the rubbery figure. Faker has the same pose as He-Man, too, just to add to the confusion! 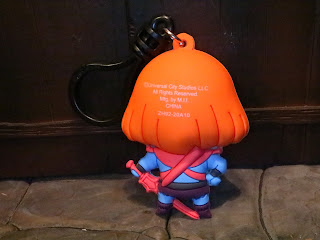 *  Rather than having a metal key-ring, these have a plastic clip. They're marketed as bag clips, so I guess the intention is to display them on a backpack or satchel of sorts. I've been hanging them from little hooks which I've screwed into the side edges of one of my display shelves and they look great that way! Also, check out the scabbard on He-Man's Faker's back. That's a cool little detail, right? 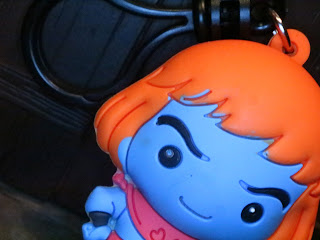 * I now own all 11 of these little figures and Faker is the only one with sloppy paint work. What happened? There is a lot of paint missing from parts of his hair, leaving the tips blue. Ugh! 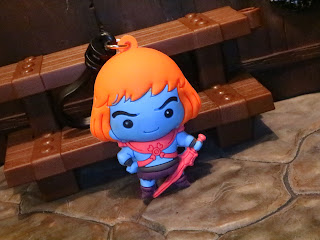 If my Faker didn't have these paint flaws on his hair, he definitely would have been one of my favorite figures in this series. As it stands, he's still a Good figure, but the paint slop does kill my enthusiasm. Since these are blind bagged you really can't pick your paintjob. Or even your figure, as they're placed in cardboard sleeves. Oh, and we're all quarantined, too. Still, if you get a good Faker you should be quite pleased. This guy's colors just pop, don't they? I love the magenta armor from the vintage cross sell art and I'm glad Monogram International chose that variant for this figure.


For more Faker reviews I've also reviewed the Mondo exclusive Faker, the M.U.S.C.L.E. Faker from the Series 3 Pack C, the Ultimates He-Man (which came with a Filmation Faker head), the Mega Construx Faker from the Battle for Eternia Collection and Faker from Battle Bones, the ReAction Faker and Leo Faker, and the VYNL Faker.