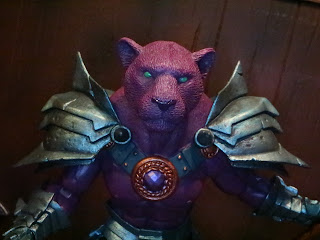 Over the past couple of years I have very slowly been building up a small collection of Mythic Legions figures, mostly due to the Masters of the Universe homage figures the Four Horsemen have been including in the line. The Wasteland series includes two homages to the denizens of Eternia: Kronnaw (who's totally not Trap Jaw) and Purrrplor, who I'm reviewing today. A villainous, purple cat with green armor, Purrrplor is totally not Panthor, Skeletor's villainous, purple cat who wore green armor. OK, all kidding aside, the Four Horsemen have been an absolutely key part of the Masters of the Universe brand for nearly the past 20 years so it only makes sense for them to homage the characters who helped to make them a household name in their own toyline. Cowarros, the homage figure to Battle Cat/ Cringer, was released last year so it only made sense that we'd see a Panthor tribute figure at some point soon. Here he is! Let's check out Purrrplor after the break and see how he stacks up against his heroic counterpart. 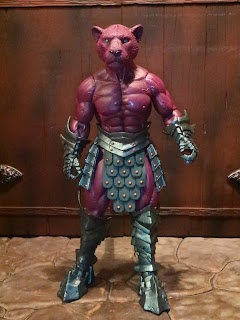 
* On the left is Purrrplor while Cowarros is on the right. While the both use the same bodies their armor is different from one another. Purrrplor probably shares his armored bits with many other figures but I recognize the waist, gloves, boots, and pauldrons from the Orc Legion Builder 3. 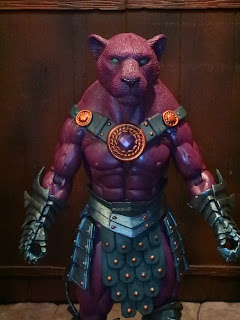 * Like Cowarros, Purrrplor features a mixture of reused parts, new elements, and an excellent paintjob to make a character that really stands out. The purple and green look excellent together and definitely make this figure "feel" so very different from Cowarros. Purrrplor uses the same body parts as Cowarros, but his armored parts are different. To give him a more animalistic appearance the collar across Purrrplor's chest and his neck are an extra piece that fits over a standard Mythic Legions neck. I do wish the full body were furry rather than just the neck and head, but overall this guy is quite impressive. 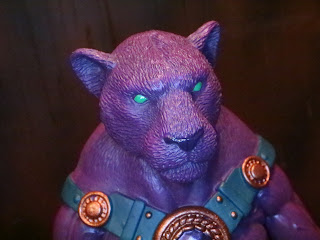 * Purrrplor has the same headsculpt as Cowarros but the fact that he has all green eyes with no pupils definitely makes Purrrplor seem more fearsome. While Cowarros seemed a bit too passive for a warrior cat, Purrrplor looks far more menacing and ruthless. It's amazing what a difference simple paint changes can make to how we perceive an action figure! 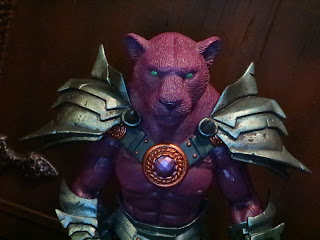 Most of the Mythic Legions figures include pauldrons and Purrrplor is no exception. He's rocking some metallic green pauldrons. They're removable and plug into the the back of the neck piece. Purrrplor's are a lot more wicked looking than Cowarros', as they're covered with lots of sharp edges and lots of dents and dings. 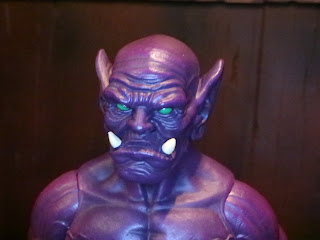 * Most Mythic Legions figures include an alternate head and Purrrplor includes an alternate unmasked Orc head. This Orc is purple, to match the body, and does allow for you to create too very different figures. Just pop off the neck piece and put this head on and you have another Orc for your legions if you wish. Obviously I'm keeping the figure as Purrrplor, but it's always nice to have some options! 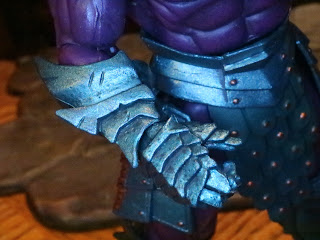 * The armored gloves match up with the rest of the armor as they're quite wicked looking as well. Sharp, jagged, and battle worn. 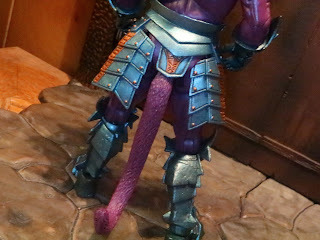 * Purrrplor not only is sporting armor around his midsection but he's also got a furry, purple cat tail. I love it! 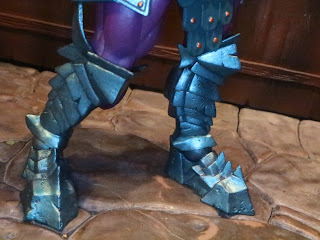 * The boots match the rest of Purrrplor's set of armor and look like they could serve some pretty nasty purposes in combat for sure. 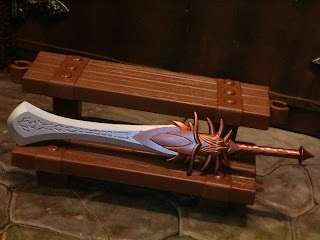 * Purrrplor's sword is incredible. I love the curved blade and the extra spiky hilt! This thing is wicked. While it's probably reused from another figure this is the first time I've seen it. The runes and details on the blade are also really nicely done, making this thing stand out even more. 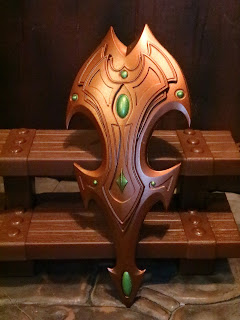 * The shield is gorgeous, too! I love the elegant design. It definitely looks like something design by the elves in The Lord of the Rings with it's gorgeous, rounded edges. The green highlights do help to tie it back in with Purrrplor's armor, though. The handle is a separate piece that attaches onto the back of the shield very securely. 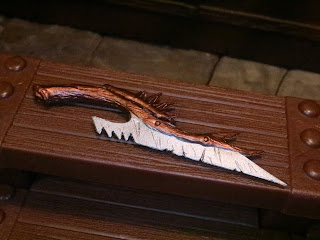 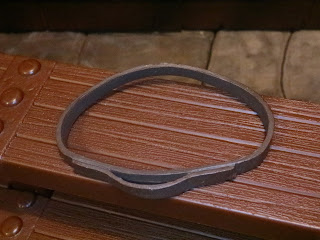 * I think every figure I've purchased from this line so far has come with a belt with a slit for storing a weapon. While Purrrplor's sword won't fit in the loop, his dagger well. You can put it around his waist or across his chest. 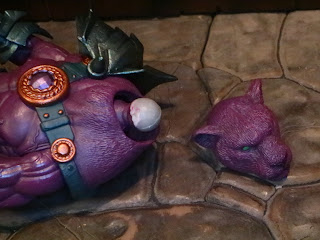 * Maybe it's because the neck piece doesn't fit as well as it should but when posing Purrrplor his head has a tendency to pop off. The joint is fine on its own, but the sitting it on the balljoint over the neckpiece is what causes the problem.

*I really wish the figure had a furry body and not just fur on the tail, neck, and head. I had the same complaint with Cowarros. It really seems like a body sculpt worth investing in for the line at this point. 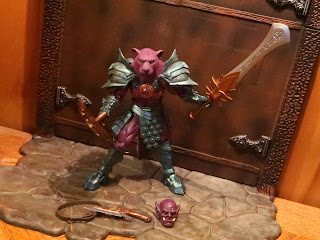 I actually like Purrrplor more than Cowarros. Better, tighter joints, cooler weapons, and a more fitting portrait give him the edge. I prefer the Battle Cat themed color scheme but Purrrplor still ends up being the better of the two figures.  I love these tribute figures from Four Horsemen Studios and I really hope they continue. It's a great way to expand the Mythic Legions line while also offering up some cool MOTU themed collectibles that are rather unique. Purrrplor is an Epic figure and is well worth tracking down while you can. Mythic Legions figures tend to skyrocket in value, so be fleet of foot to grab this guy!


This is the first figure of Purrrplor I've reviewed. For more figures from Mythic Legions check out the following:
Cowarros
Kronnaw
Malynna
Orc Legion Builder 3