Action Figure Review: Sun-Man from Masters of the Universe Origins by Mattel 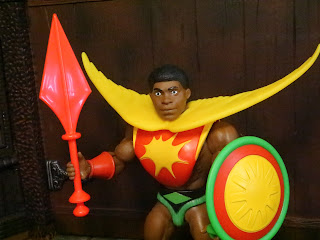 Mattel released a deluxe version of Sun-Man earlier this year as a Mattel Creations exclusive and a standard Sun-Man figure in series 9 of Masters of the Universe Origins. That's the one I'm reviewing today as I just received mine a week or two ago. My review of the Mattel Creations Sun-Man has a lot of detail about the origins of this character but I still feel I should mention here that Sun-Man is actually the star of his own property and was the flagship figure for Olmec Toys. Created by Yla Eason in 1985, Sun-Man was her response to a comment made by her son that he couldn't be a superhero because he wasn't white (some sources record the comment being that he said that it was because He-Man was white). Sun-Man was the star of the toyline Sun-Man and the Rulers of the Sun, 5.5 inch and MOTU inspired toyline that featured an incredibly diverse roster of characters with different skin tones and ethnicities. Working with Yla Eason, Mattel is now weaving the cast of Sun-Man and the Rulers of the Sun into the world of Masters of the Universe, meaning we're going to be getting more of Sun-Man's allies and villains in both MOTU Origins and in Masterverse as well. Read to take a look at Prince Sunni Ali, better known as Sun-Man? Then join me after the break... 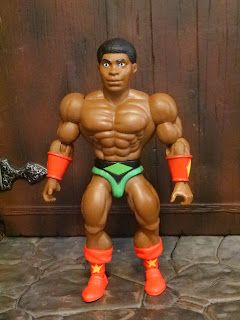 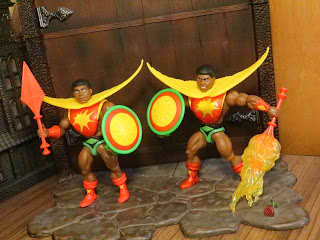 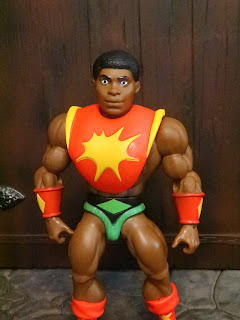 
* Sun-Man looks pretty good and does a great job of capturing the appearance of the vintage toy but in the Masters of the Universe Origins style. It's doubtful that most MOTU fans have ever had the chance to hold a vintage Sun-Man figure (I haven't) so having this guy available is a welcome treat. His armor is a removable piece adorned with a stylized sun on the front. His bracers are new and look really cool and the colors are great, showcasing the colors of the Pan-African flag with the yellow color used for the sun and his other details. 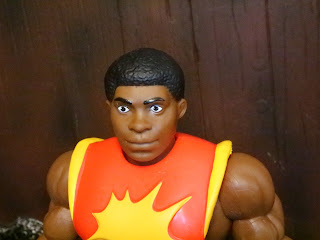 * Apparently the vintage Sun-Man was modeled after Yla Eason's son and this one captures the look of the vintage toy fairly well. There were a few different versions released over the years, including one with a flat top that's pretty cool looking. I've heard many comments that Sun-Man looks like Kenan Thompson and, well, yeah, he kind of does, but he also looks like the vintage toy, keeping him in line with the MOTU Origins aesthetic. 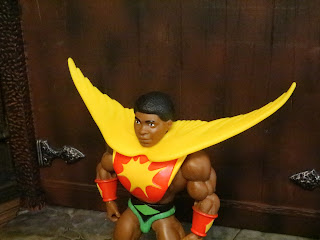 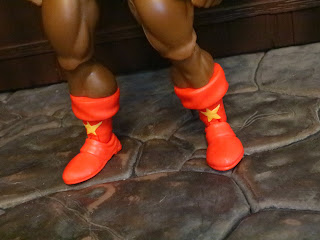 * Sun-Man has some fantastic footwear. Check out his shiny red boots with stars on them! His costume definitely borrows from both the MOTU aesthetic and traditional superhero style to make something rather unique. 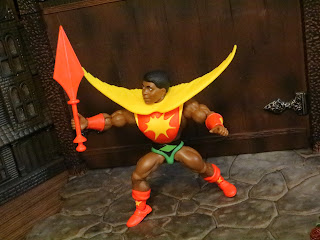 * Sun-Man is built the same as the rest of the MOTU Origins figures, meaning he has the style of the vintage toys but with more modern articulation. While their bulky frames make the articulation a bit clumsy, the Origins figures do feel like an evolution of the vintage line. Imagine what you would get if you mixed a vintage MOTU (or Sun-Man) figure with a MOTUC figure. They're quite fun to play with.
* They're also modular. and can be easily separated to make your own lazy boy customs! 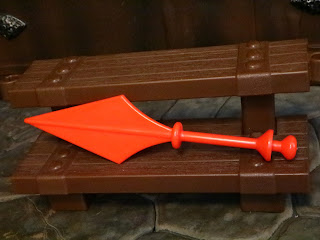 * I'm really liking Sun-Man's sword or possibly short spear (ikiwa). Apparently it might not be a true sword (Sun-Man was depicted as very non-violent when he was first created) but it definitely looks like it could do some damage. It's actually intended to channel the power of the sun. That's where Sun-Man gets his power from, kind of like the Dayman. He's also a champion of the sun. 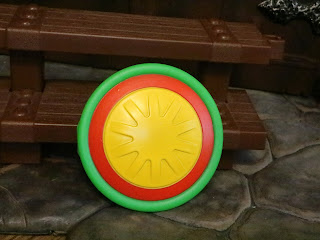 * Sun-Man has a fantastic shield with a stylized image of the sun on it. The colors  are really bright and nicely match the rest of his outfit. He can also hold it easily in either hand. 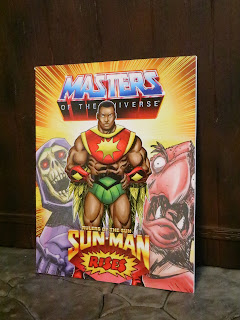 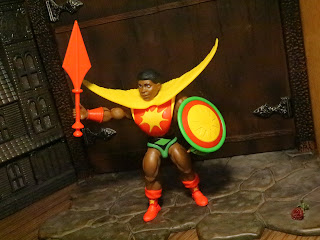 I really like Sun-Man and while the Mattel Creations figure is superior, this one is still really, really nice at around 2/3rds the price of that one. There are a few minor paint issues but overall this is a great update of a significant but less known 1980s action figure. I have no idea how far Mattel will ultimately go with Sun-Man in MOTU Origins (the line itself just keeps going and going) but it is exciting to see the line expanding in a way I wouldn't have expected just a year or two ago. This is a Great 1/2 figure and a nice addition to the line as well as a cool conversation piece.

If you're looking for more of Sun-Man/ Prince Sunni, check out my review MOTU Origins Mattel Creations exclusive Sun-Man.

For more Masters of the Universe Origins reviews check out the following: