Action Figure Review: He-Man from He-Man and the Masters of the Universe by Sonic/ C3 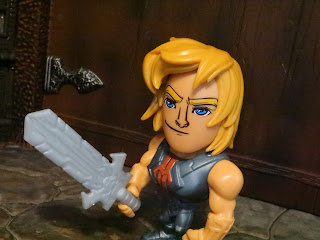 Remember back in February and March of 2020 (before Covid) when Sonic had a Wacky Pack kids meal promotion for Netflix's She-Ra and the Princesses of Power? Now Netflix's He-Man and the Masters of the Universe has joined the party. The CGI animated Masters of the Universe cartoon has six exclusive items which can be found in the Wacky Pack kids meals at Sonic drive ins: Three articulated figures and three spoons. Today I'm going to kick things off with a look at He-Man. I always get a kick out of adding some unusual MOTU stuff like this to my collection and this is a pretty cool stylized He-Man figure. You might have to look for these for a bit as some Sonics may not have them in stock yet and some don't seem to want to see them without the purchase of a kids meal. Others sell them for between $1-$2 while the one I finally found them at just brought me a bag of them and asked that I tip the waitress. Score! Let's take a look at He-Man after the break... 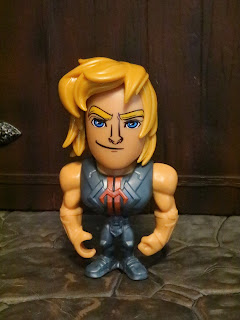 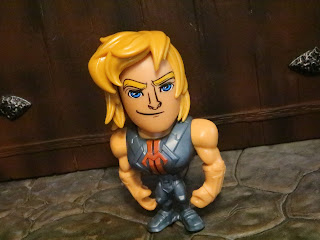 The Positives:
* I really like the look of this figure. He's stylized for sure with a large head and a smaller body, kind of like your typical vinyl or Funko POP! figure. Since he's based on the Netflix He-Man design he's sporting an armored outfit that resembles the classic Battle Armor outfit with a "H" symbol that also looks like the Sword of Grayskull/ Power Sword from this series. 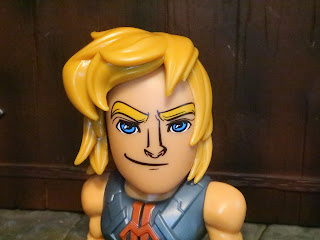 * I absolutely love the headsculpt on this. Well, the hair sculpt. The head is flat with the facial features printed on but it looks really good. It's a very crisp, clean design with a lot of character to it. The hair is glorious, though. It's a great sculpt that just looks fantastic. Almost 200x-ish. 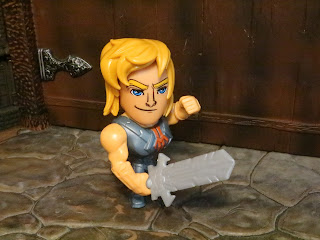 * There's a little articulation here, but any amount is typically good for a fast food promo. His arms swivel, so he can battle, and the balljointed head does allow for a little movement and some wiggle room when posing him. He feels like a solid, sturdy little toy and is definitely more fun than most fast food promos. 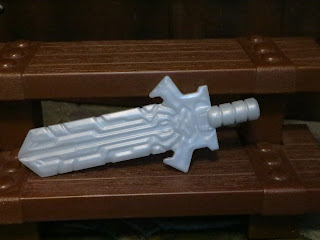 * He-Man comes with the Sword of Grayskull, so that's a plus (that's what they call the Power Sword in the Netflix CGI show). It's a decent sculpt that fits in He-Man's right hand securely, so he really does functional like a traditional action figure. 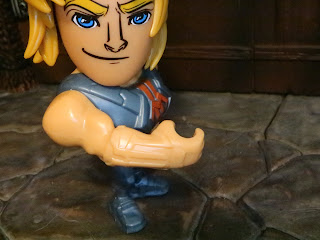 The Negatives:
* My only complaint is that his gauntlets aren't painted. I hate unpainted details like this, especially when they're on the character's skin. 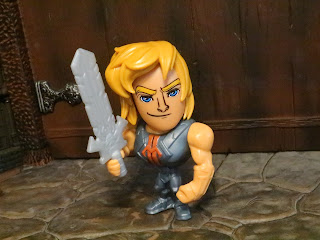 This is a really neat little figure. He's not a minifigure (he's too large for that) but he definitely feels more akin to low-budget toy or a vinyl figure or something. The figure design isn't that special, sure, but the portrait is great with a lot of character and it's a pretty inexpensive little trinket. If you collect He-Man stuff, it's kind of a neat little extra to have hanging around on the shelf with other promotional items. He gets a Good and a 1/2 from me and is definitely the best toy in this set. I'll be checking out the other items in the next week or two, so keep checking back.


I've reviewed so many versions of He-Man that he has his own review archive. Check out Fabulous Secret Powers for all of my He-Man reviews.
Posted by Barbecue17 at 6/08/2022