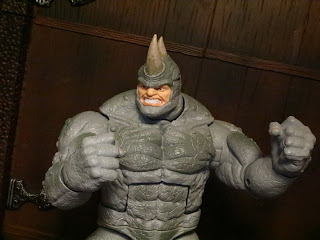 Hasbro has been putting out some very good, very definitive versions of popular characters in the Marvel Legends Retro Collection line and I've recently picked up another villain: Rhino. The Rhino was released as a build-a-figure back in 2015 (so a good seven years ago) but now you can pick up an improved version of him as a single release as part of the Spider-Man focused Retro Collection. While he's placed on a classic Toy Biz inspired card from the Spider-Man animated series of the mid 1990s, this version of Rhino works perfectly well in your standard comic inspired Marvel Legends display, too. I'm honestly not sure I've ever owned an action figure of the Rhino before, so this is a first. I didn't have many figures from the Toy Biz Spider-Man line (I remember having the Lizard, Peter Parker, and Carnage) and I really stopped collecting the 1/18th scaled Marvel Universe line before the Rhino was released, so, yup, this guy's a first for me. Let's check out the hard charging Rhino after the break... 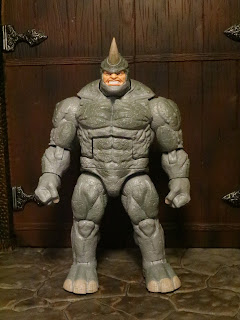 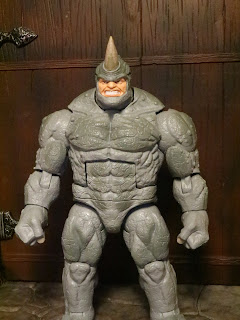 The Positives:
* Aleksei Sytsevich is a guy who has gone through some genetic modification (radiation, chemical, and gamma)and been given an armored rhinoceros suit. So what do we have hear? A big tough guy wearing an armored rhinoceros suit. The suit is wonderfully detailed and makes the Rhino look pretty intimidating. While most of the figure is reused from the previous build-a-figure, the body sculpt is still quite impressive and the proportions are suitably intimidating. There's some nice shading on Rhino, too, which helps bring out the details on his suit. 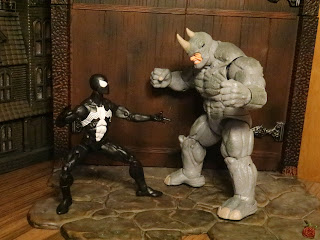 * Rhino's a big guy. not just tall, but wide as well. He definitely looks noticeably larger next to standard Marvel Legends figure, especially a smaller, thinner guy like Spider-Man. 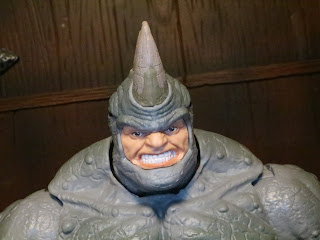 * Hasbro included two new portraits for the Rhino and they're both major improvements over the earlier release of the character. First up is Aleksei with an angry face. Teeth gritted, eyes squinting a bit; this guy's about to ram through something head first. The head sits down inside the body rather than popping onto a ball joint. This allows for the Rhino's neck to tilt down better for ramming poses. 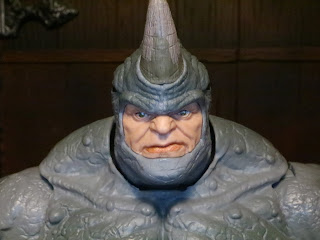 * The second head features a more neutral expression for Rhino. He's just chilling out, maybe thinking about what he wants to do next. Grab lunch? Release some animals from their cages? Binge watch the Jumanji movies? 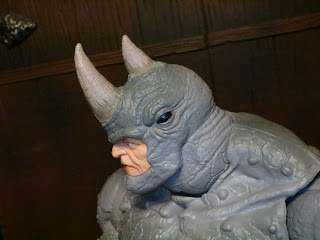 * The side of Rhino's head looks fantastic and definitely drives home the rhinoceros theme of his outfit. There's some great sculpting here and some really nice paint detail. He's quite impressive for having a simpler costume design. 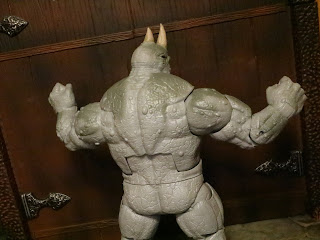 * The sculpted detail of course carries over to the back but so does some of the paint detail. It really shows off the sculpting and makes for a more complex looking figure. 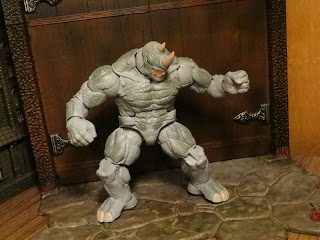 * Being based on a seven year old bulky Build-a-Figure body, Rhino doesn't have the smooth and fine-tuned articulation you'd get with a more recent figure. That being said, he still moves quite well and can take plenty of bruising and bashing poses. He's durable and sturdy, so you don't have to handle him like he's made out of glass, either. 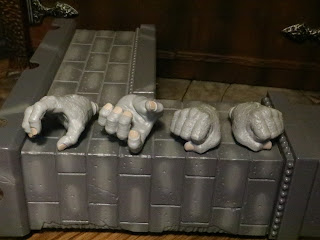 * Rhino comes with two sets of hands: A pair of grappling, gesturing hands and a pair of fists. They swap out easily so you can change them back and forth depending on whether you want the Rhino to pull things apart or pummel them. 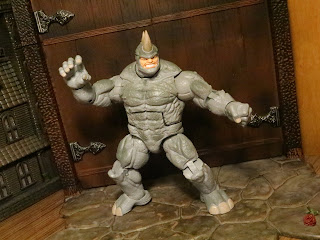 I'm really happy with how the Rhino turned out. I'm enjoying number of these Marvel Legends retro Collection releases and it's especially nice to be able to pick up a Build-a-Figure character in one go, especially when it's been improved on. Rhino has fantastic headsculpts, a great overall design, and just makes for a fun addition to the collection. Hasbro is really putting out a nice mixture of classic villains lately, especially for Spider-Man, which is definitely welcome. This is a Great and a 1/2 figure and well worth picking up, even if you have to "charge" him to your credit card. Charge. Get it?