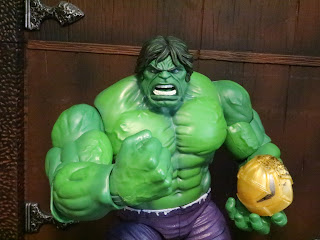 While there are absolutely properties that have had action figure lines running for 20 years or more, it's pretty wild for a line to essentially run for 20 years largely unchanged. Marvel Legends definitely fits that bill. Toy Biz started the line in 2002 (it was born out of the 2001 Spider-Man Classic Series) and had great success until 2006 when Hasbro took over the Marvel license. Hasbro kept the Marvel Legends name and stuck to the style: 6 inch-ish highly articulated action figures with Build-a-Figure pieces. They stopped the line in 2008 to focus on the 1/18th scaled Marvel Universe line but returned to it again in 2012. Since then, it's been a crazy, wild ride. I think my first Marvel Legends figure was the Punisher from Toy Biz's series 4 but I did pick up a few from that series like Beast, Elektra, and Gambit. The original four figures from the 2002 first series were Iron Man, Toad, Captain America, and Hulk. Oddly enough, about 9 or 10 years ago my mom called me and said she had found a Hulk figure on clearance at Target and asked if I wanted him. It turned out to be a Toy Biz series 1 Hulk, probably 10 years after his release. Weird, huh? I ended up trading him to someone or something rather than opening him. I've really been into Marvel Legends more over the past 6 or 7 years and have built up quite a collection. A few week ago I was at GameStop and found a good sale on the Marvel Legends: 20th Anniversary figure of the Hulk. I'm almost always down for an Incredible Hulk figure and this guy looked pretty enticing. He's also really flipping heavy. Let's take a look at Hasbro's 20th Anniversary tribute to the original Marvel Legends Hulk after the break... 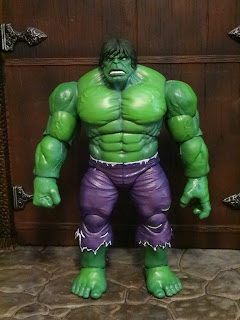 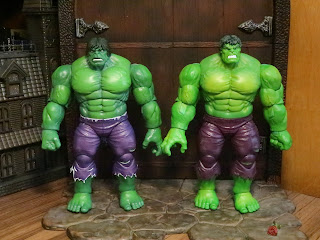 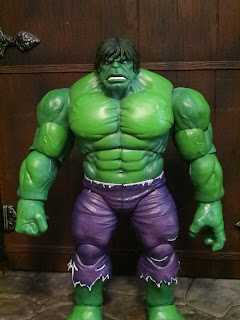 
* The Hulk looks really cool here. This sculpt has been seen a few times now but it's a great body sculpt with a ice paint job mixing darker and lighter shades of green to add more definition to the Hulk's body. He's a massive, muscular dude and all of the massive muscle is present and visible. 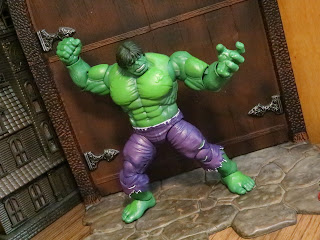 * Bruce is a big guy. Well, not Bruce Banner himself but his alter-ego, the Incredible Hulk. This figure stands about 2 inches taller than most Marvel Legends figures and is way bulkier. He's heavy and hulking, just like you'd expect. 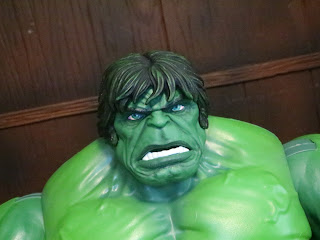 * The Hulk has two new headsculpts, both of which seem to take influence from the 1970s looks of the characters. Not TV show Hulk or anything, just the classic comic look for the character. He's definitely a very brutish looking figure with lots of character in his face, a massive sneer, eyes that look like someone about to go mad, and some greenish-back hair. It's a really unique look for Hulk compared to most other Marvel Legends depictions of the character and I really like it. 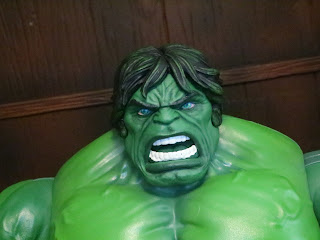 * The second headsculpt shows the Hulk when he's angry and, man, is he angry. This is a shouting, raging Hulk head and it's great. His mouth is open and his nostrils are flared! Stay out of this guy's way. 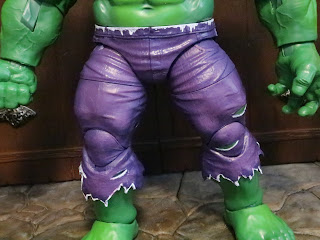 * While most Hulk figures have had purple pants, it's really cool that Hasbro gave the edges of the pants on this guy a white trim that makes it look like the pants are fraying. It's a cool detail and it's a pretty convincing effect. 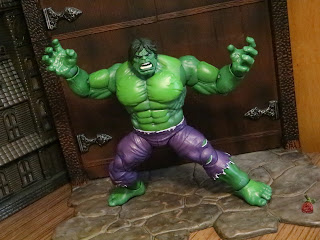 * The articulation is sturdy and strong on the Hulk. Since he's a chunky monkey he can't necessarily take fine and nimble poses but he definitely should be able to take plenty of angry looking battle poses. He's mostly articulated like your average Marvel Legends figure but his lateral pectoral hinges (butterfly joints) and balljointed mid-torso give him more of an edge over most larger figures and Build-a-Figures. 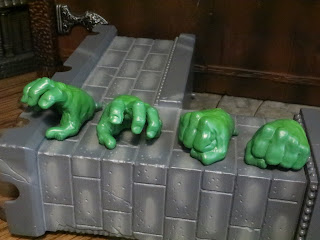 * The Hulk comes with a pair of interchangeable grappling hands and a pair of fists. They're easy to swap in and out and give a smashing bit of variety in coming up with new poses. 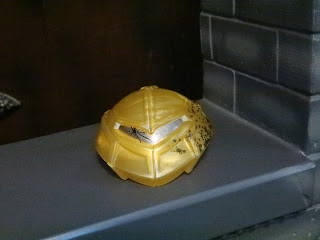 * Just for fun, Hulk comes with a gold Mandroid head to give him something to hold onto and to throw around. It's the head from the 2014 Mandroid Build-a-Figure but molded in yellow, pearlescent plastic with some paint application to make the visor looked cracked and the helmet look covered in junk and debris. Hulk can't hold it perfectly but it is large enough to tuck it into one of his hands or under an arm or something. 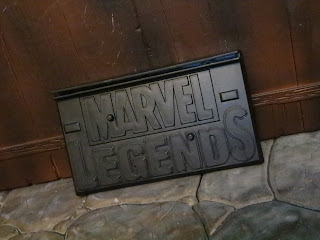 * The 20th Anniversary Marvel Legends figures come with a flat display stand with the Marvel Legends logo on it. While Hulk doesn't really need a stand (he stands just fine on his own) the stands are neat and I'd like to see Hasbro start including them with every release (or at least a stand of some sort). 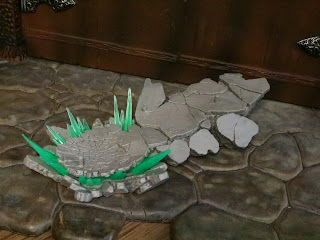 * The original Marvel Legends figures from Toy Biz were famous for their detailed display bases and while not every figure in this series has a base, Hulk does. His is a very nicely detailed strip of concrete that is currently being smashed by the Hulk, perhaps by his stomping foot or a pummeling from one of his fists. There's even some green "gamma" energy radiating up from the point of impact. It's a pretty nice sized base and it looks great on display with the figure. 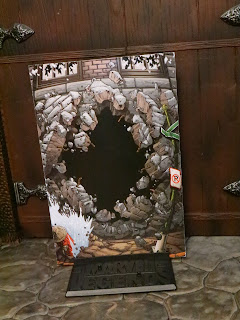 * Hasbro has also included a cardboard backdrop that attaches to the display stand. One side has an image of a classic Hulk comic while the other side is an image of a wall that the Hulk has just smashed through. 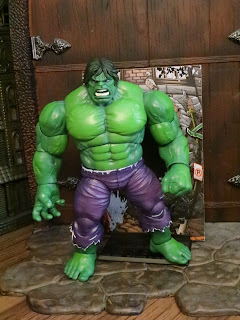 
* I love that Hulk is such a large figure but it's kind of weird that Hasbro didn't include a larger backdrop for him. That backdrop is puny compared to Hulk and definitely doesn't improve the look of the figure or anything. 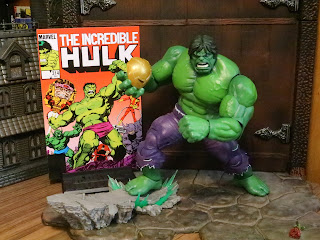 It's pretty cool that Hasbro is acknowledging the 20th anniversary of Marvel Legends and the first three figures in the series are all strong picks (Toad is coming, too, but for some reason was left out early on). Hulk turned out really nice and comes with some cool extras, especially the smashed concrete base. The price is certainly a bit higher on these guys than most other Legends figures but Hulk is a big, bulky figure and definitely feels pretty substantial. He's a Great version of the Hulk with a rather unique look thanks to the 1970s' style and the frayed pants.

If you're looking for more of Bruce Banner/ the Incredible Hulk, I've also reviewed the Disney Infinity: Marvel Superheroes Hulk from Disney Infinity 2.0 and the Marvel Legends Infinite Series Age of Ultron Hulk.