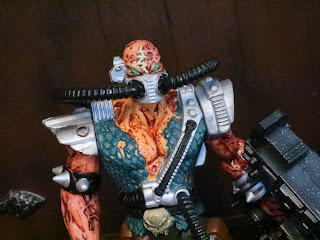 Hey! Another classic Spawn review! On my most recent trip to Gamers Alley in Gastonia, NC I picked up another classic Spawn figure: Nuclear Spawn. This is another one that I always kind of liked but never owned. Nuclear Spawn was released in series 5 in 1996 during the period when McFarlane was still sticking to a more traditional action figure style for the line. You know, classic stances, traditional articulation, and lots of accessories and action figures. Nuclear Spawn is a pretty cool variant in that he sort of looks like a post-apocalyptic wanderer out of the Road Warrior or something. Does Spawn really need breathing gear though if he's going into the sewers or into areas with mutants and radiation? I guess so. Let's take a look at Nuclear Spawn after the break... 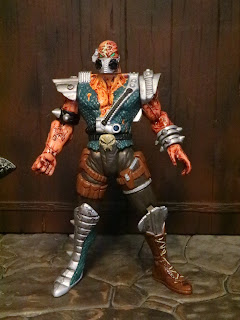 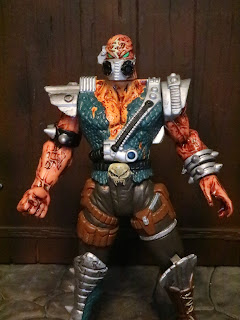 The Positives:
* This is a pretty slick looking figure. First, you can see Al Simmons' burned, necrotic skin pretty well here. It's all on display with gruesome detail. He's also wearing some rather damaged battle gear. A ripped up shirt (maybe armored?), some metal shoulder pads, and a skull belt buckle. This definitely seems like a figure designed to look cool rather than to really suit a specific purpose. I mean, other than a breathing mask how does anything here protect Spawn from nuclear waste or radiation? A better name might have been wasteland Spawn or renegade Spawn or something. Still, the detail is excellent, especially the paintwork on the skin and the sharp details on the outfit. This is definitely ahead of most other 1996 action figures. 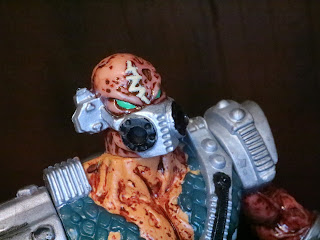 * The headsculpt is really cool. Spawn's sporting a huge breathing mask that reveals the upper half of his head exposed, showing off his glowing, green eyes and the stitching keeping his head together. 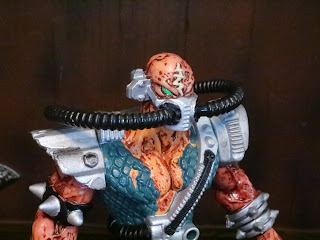 * The figure comes with three flexible tubes, two of which are intended to fit into the respirator. They plug into the ports on the front and attach to the back of the figure. 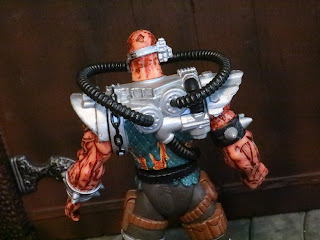 * Here's a shot at all of the gear on Spawn's back. He's definitely sporting some sort of complex air filtration system. It's quite cool looking with a lot of detail and a mixture of the flexible tubes and the sculpted tube running around his waist. 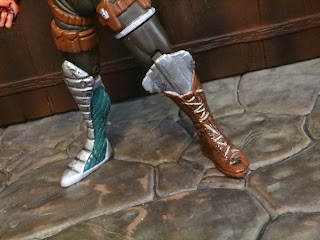 * Here comes some of that patented McFarlane asymmetrical footwear! Nuclear Spawn's right boots looks like some sort of custom job with the same scale-like pattern as his shirt while his left boot looks like some random piece of junk he fished out of a dumpster and stuck some scrap metal into to serve as armor. 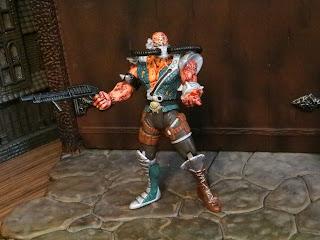 * As I mentioned in my review of Commando Spawn, Nuclear Spawn's articulation was pretty standard for the time, if not a little better. Balljoints and swivel/hinge joints weren't everywhere yet so the hinged knees and extra swivel joints on the arms (a swivel cut at the right bicep and at the left wrist) definitely seemed pretty decent at the time. He feels pretty durable too, as it seems that kids were still probably buying these. 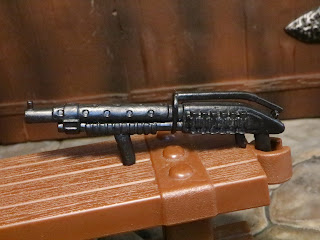 * Nuclear Spawn comes with some cool weaponry to battle in the sewers or across the wastelands. First up is a rather nifty shotgun. It's scaled to the figure rather well and looks more realistic than most of the weapons included with Spawn figures. There are even some sculpted shells in the storage rack on the side of the weapon. 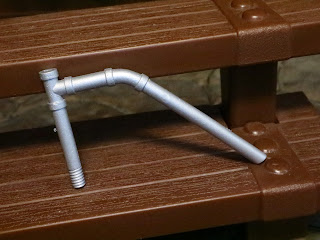 * When he has to do some plumbing repairs in Spawn Alley, Nuclear Spawn comes with some pipe. Yup, pipe. OK, so it's actually intended to be a melee weapon of sorts. You know, something improvised that he just snatched and started using to beat someone down with. There is some pretty nice detail, though, as you can see the threads and joints on the pipe. 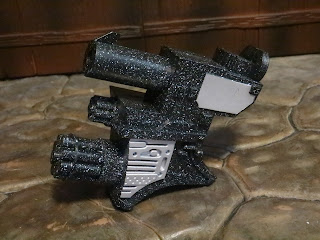 * Nuclear Spawn also comes with a massive weapon composed of three different guns. There's a missile launcher on top, a smaller minigun in the middle, and a larger minigun on the bottom. This is an unusual looking piece as it's molded in black with whitish-grey specks. Unusual, but kind of cool all the same. 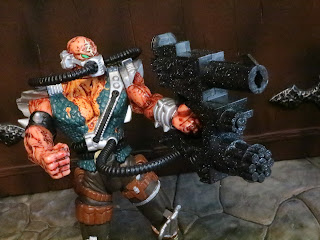 * The massive gun has two other cool features. One, the top cannon actually launches a missile. It's one of those "pull back and release" missiles rather than something activated via a button, but it does work.
*Second, a the flexible hoses connects from the gun to Spawn's breathing rig. Why? Why not? 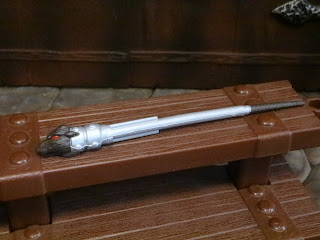 * The missile is pretty crazy as it's clearly a rat. This is some vintage Teenage Mutant Ninja Turtle Wackiness right here. Why is Nuclear Spawn launching rats? The rat head is painted and given red eyes while the back of the missile has a rat-like tail. Weird. Kind of cool but also very, very weird. 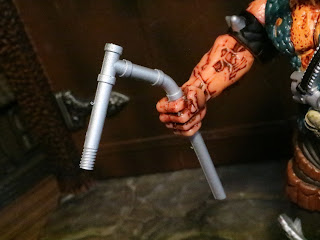 The Negatives:
* The pipe is a bit too loose for Spawn's right hand and it just kind of spins flops around. 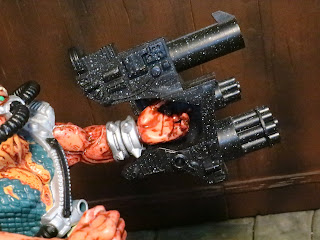 * The large weapon attaches to Spawn's left hand in an unusual way. There's a clip that fits over his wrist and a tab that fits between his fingers. It's a bit over complicated and really would have worked best if it were simpler. Probably less risk of breakage, too. 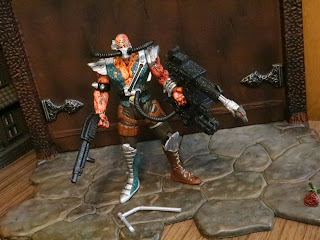 I really like Nuclear Spawn. A lot. He's really a very impressive figure and I kind of hate that I didn't snag him back in 1996. To be honest, while I was reading Tomart's and Lee's Action Figure News and Toy Review back then, I wasn't as interested in Spawn at the time after a few of my series 1 figures broke too easily. This guy is amazing, though. A fantastic design that just looks cool, great weapons, and decent articulation for the time. He would have been Epic back then as he's still pretty darn Epic now. I really want a modern version in the new Spawn line, don't you? Nuclear Spawn, y'all. Nuclear.
Looking for more of Spawn/ Al Simmons? I've also reviewed the classic Commando Spawn, the movie based Al Simmons, Burnt Spawn, and standard Spawn, the Mortal Kombat 11 Malefik Spawn (Bloody Disciple) and Spawn (Bloody), the modern Spawn with throne, and the 2022 Mandarin Spawn Deluxe and Ninja Spawn, both of whom aren't Al Simmons, but they're still Spawns.