Wrapping Up 2021: Zodac & Scubattack from Masters of the Universe by Mega Construx 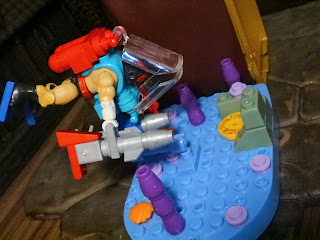 Mega Construx had a weaker year in 2021 than in 2020 but they still had a few nice sets and some solid minifigures released. One of the most unusual ideas for Mega Construx in 2021 was the introduction of the minisets packaged inside of a little Skeletor head. There were four of these; three released very early in 2021 and then a set with Zodac and the Scubattack mixed in to the assortment later in the year. I found mine back in October but with so much stuff coming out I'm just getting around to checking it out. Zodac was already released in 2020 in the Panthor at Point Dread set but the Scubattack hasn't been utilized in toy form since it's original 1987 release as part of the vintage Masters of the Universe line. One of the Power Pak sets (along with the Cliff Climber and Tower Tools) the Scubattack was one of the last accessory packs/ small vehicles released in the vintage line, so it's fun to see Mattel revisit it. Zodac is an odd choice for inclusion here but at least he's not a figure we've seen multiple times like He-Man or Skeletor. Clamp Champ was one of the figures wearing the armor on the vintage packaging so he would have been an excellent inclusion. Anyways, let's dive in and check out the Zodac & Scubattack set after the break... 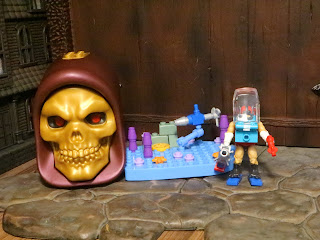 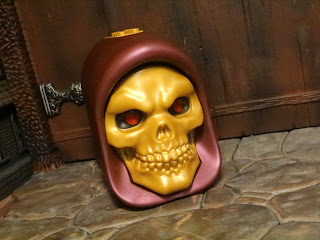 The Positives:
* The sets in this series all come packaged in a plastic Skeletor head. They're all the same sculpt but molded in different colors. This one gets a metallic purple hood, a golden skull, and red eyes. 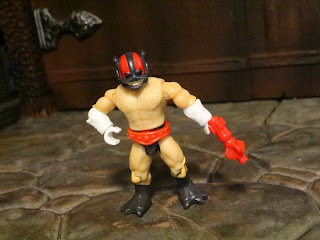 * Zodac is included here and he is a little differenty from the previous release. First of all he doesn't have his armor due to the blue armor that he wears as part of the Scubattack gear. Secondly, he has darker boots and trunks, a red belt, and white gloves like the Filmation version of Zodac. At least he's not he exact same figure again, huh? He still comes with his excellent laser pistol with the very cool flared barrel. 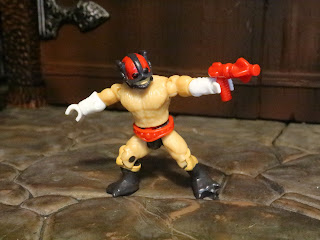 *  Like the rest of the figures in this line Zodac is well articulated and ready for battle. These really are some of the nicest minifigures out there and they're incredibly fun. If you haven't picked up one yet and you're either a MOTU fan or a minifigure fan, you really need to. 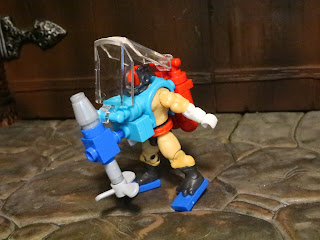 * I'm always impressed by how well Mega Construx captures the designs of the vintage vehicles and accessories in brick built form. The color and design, even for the little gadgets like the Power Pak propeller and the red oxygen tanks, looks fantastic. 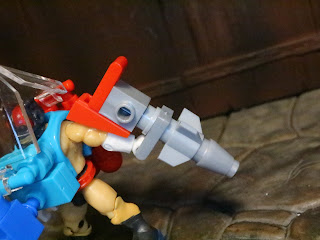 * Zodac also comes with the large torpedo launcher weapon that the vintage set came with. He holds it pretty well, too. 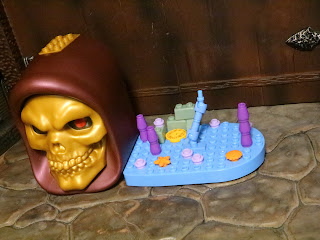 * The set is a pretty simple build designed to look an ocean floor. The back of the Skeletor head forms the base and there are lots of little details to give it some atmosphere. 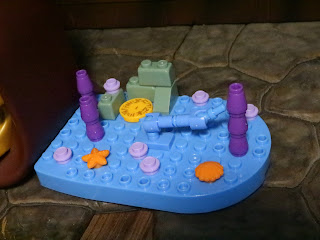 * The base has a lot of neat details like a shell, a starfish, and a bit of ruins with some sort of gold disc. Hey! That's one of the Golden Discs of Knowledge from the Filmation episode of the same name. How cool! Zodac appeared in the episode, too, so his inclusion here now makes a bit more sense. What an amazing detail! 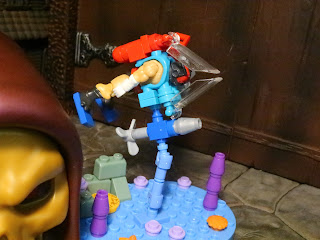 * There's an articulated blue bar in the middle of the playset that the Scubattack can attach to so Zodac can be positioned in different swimming positions. It's neat and makes for a fun display. Just add Mer-Man and you've really got something here! 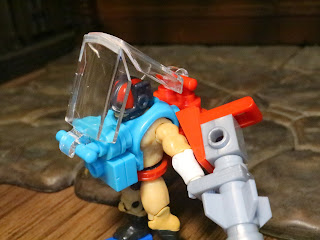 The Negatives:
* I really wish that Mega Construx had figured out a dome piece to use on the Scubattack rather than two pieces that leave so much open space. I don't really expect something watertight or anything but this surely could have been built to look a bit more convincing. 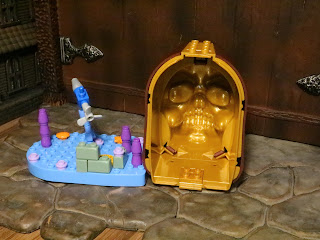 * The other Skeletor head sets have found some use for the head but here it really serves no purpose. At the very least you'd think a dock or something could have been built on top for Zodac to dive from. It feels very uninspired. 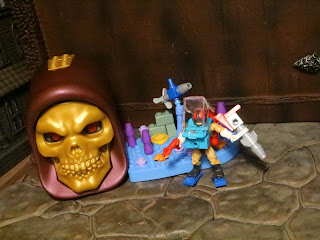 The usage of the Skeletor piece is a waste but I really find myself liking the underwater scene, the Golden Disc of Knowledge, and the Scubattack gear itself. It's really nicely done with lots of very detailed little parts. The little goodies scattered across the sea floor are pretty nifty, too. Yeah, I would much rather have had a different character with the set but Zodac still isn't bad and the Filmation look is nice if you have the other figure and want to swap things up. For the $10 or less retail price of these you're getting quite a bit of goodies. This one is an Epic little set and quite a fun addition to the line.
I've reviewed so many action figures of Skeletor/ Keldor that he has his own review archive. Check out Snake Mountain for all of the Skeletor reviews you could possibly want!
If you're a fan of Zodac I've also reviewed the Super7 M.U.S.C.L.E. Zodac, the Colorforms Deluxe Play Set, The Loyal Subjects Zodac Action Vinyl, the MOTU Origins Zodac, the Mega Construx Panthor at Point Dread set which includes a Zodak minifigure, the POP! Zodac #94, and the Eternia Minis Zodac and Horde Zombie Zodac from the Slime Pit Multipack.
This is the first version of the Scubattack I've reviewed. For more Masters of the Universe Mega Construx reviews check out the following:
Battle Bones
Battle Cat Vs. Roton
Battle for Eternia Collection
Battle Ram
Castle Grayskull
Evil-Lyn (Mega Construx Heroes)
Evil-Lyn
Evil-Lyn (Series 2)
Faker
Fisto
Fisto & Cliff Climber
He-Man & Jet Sled
He-Man VS Beast Man
Man-At-Arms (Mega Construx Heroes)
Man-E-Faces
Moss Man
Panthor at Point Dread
Prince Adam
Roboto
Scare Glow
Scare Glow (Mega Construx Heroes)
Skeletor
Skeletor & Panthor
Stratos
Stratos (Mega Construx Heroes)
Stinkor
Teela
Trap Jaw
Trap Jaw & Laser Cannon
Tri-Klops
Wind Raider Attack
Posted by Barbecue17 at 1/10/2022