Action Figure Review: Red Tiger from The Worst by Super7 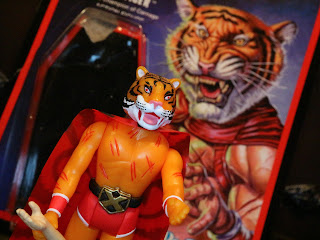 Ready for another review from Super7's The Worst? Today we're getting another figure from Series 2: Red Tiger, the Brutal Champion of Carnage! Mixing together elements of an old school wrestler and a man-eating tiger, Red Tiger adds a bit more savagery to the villainous ranks of The Worst! Initially I wasn't thinking that Bronze Tiger would be one of my favorites from the series but having him in hand I really like him. He's crazy, over the top, and a true bad guy if you've ever seen one. He does bear an uncanny likeness to Bronze Tiger, though Bronze Tiger is by no means an actual tiger nor does he eat people. Let's check out Red Tiger, a humanoid tiger who does eat people, after the break... 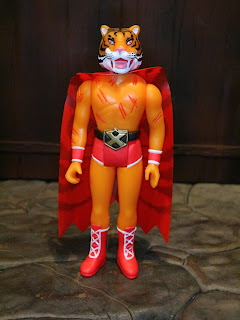 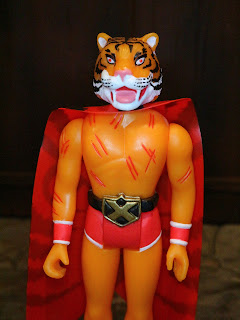 
* I love the bright orange body of the Red Tiger. he's still orange, like a tiger, but he's clad in red so I can understand where he gets his name from. He's wearing a championship belt of some sort (I believe it's supposed to be the "X" that is nside the coffin shaoped "O" from The Worst logo), sweatbands (evil sweatbands!), and is covered with lacerations. He's not furry, so maybe he shaves everything other than his head? Huh. That's kind of odd, isn't it? 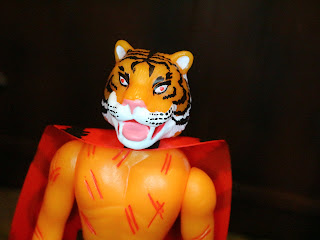 * The headsculpt is darn fine. Again, remember these are ReAction figures, so they're supposed to look like vintage Kenner styled figures. The detail on the head definitely makes Red Tiger feel more like an early 1980s figure than a late 1970s figure, but I'm cool with that. The paint work on the stripes and other details is really very solid. 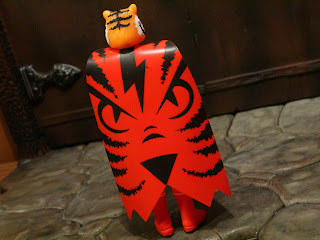 * Check out that cape. I often lament that capes just aren't socially acceptable for regular wear in our current day and age but wouldn't you love to walk down the street in this thing? It's literally got the eyes of the tiger on it. Plus, this tiger has a Harry Potter scar on his forehead. The cape isn't removable but if it were it would perfectly complement the Funskool Tiger Force Outback, wouldn't it? 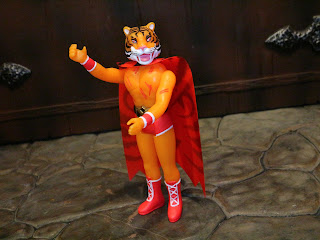 *  If you've ever picked up a retro figure like this, you know what to expect: 5 points of articulation and all swivel joints. He feels quite well made and sturdy and definitely of a better quality than some of the earlier Funko ReAction figures.

* I love the wrestling styled boots. They add some pizazz and have some rather neat paintwork for a figure of this style. 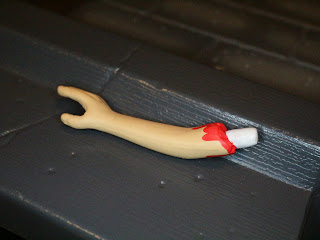 * Red Tiger includes... a severed arm? Yup. Like Pennywise, or Leatherface, Red Tiger includes a severed arm. With a bone sticking out of it! Looking through some medical journals has confirmed that this accessory is 100% medically accurate. Maybe Red Tiger is studying for his med school exams, maybe he's snacking on someone he beat in the ring. You decide! 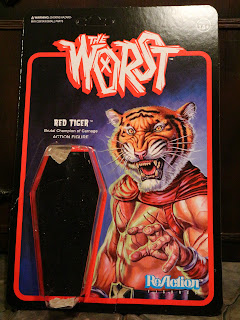 *  If you read this site regularly, you know that packaging has to be pretty special for me to bother mentioning it. The Worst has some incredible card art and is absolutely worth mentioning. Featuring illustrations of the characters by Ed Repka, a prominent illustrator of album covers, these cards really bring these characters to life. Without this art and a glimpse into the "idealized" versions of The Worst, I don't think these figures would have half the appeal they do.As it stands, the card art is one of the best parts of the figure. This guy is legit, right?I love the snarl and the hand reaching out. The art kind of makes him look like he has a regular human body with a tiger head. Weird, huh? 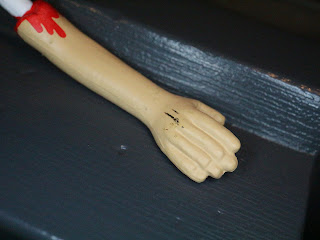 * The severed arm came out of the packaging with some scuffs on it. I don't know if the fact that the accessories are taped to the inner blister cards has anything to do with this scuffing, but it's worth noting. 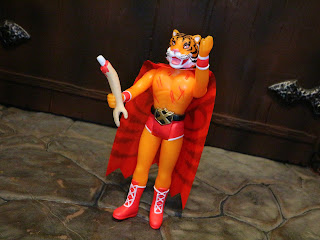 It turns out that the Red Tiger is one of my favorites in this series! He's got a killer, colorful design, a really funky cape, a great headsculpt and, of course, some killer artwork. I don't really think there's a dud in this entire set but if you were pressed to choose nobody could say that Red Tiger is the weakest link in the chain. He's got a unique vibe that helps him stand out from the crowd. Whether you want him to wrestle, hang out in the Cantina, or join G.I. Joe Tiger Force as a Cobra spy, Red Tiger has got you covered.