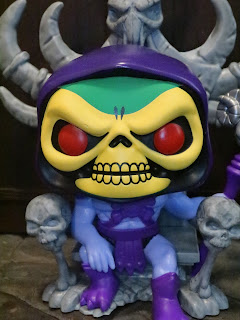 I'm pretty sure Funko has released more Skeletor POP! vinyls than they have He-Man POP! vinyls and the latest release is a pretty amazing one: Skeletor on Throne #68. Released as a "Funko Target-Con 2021" exclusive (which means scalper city), Skeletor on his throne is a deluxe release that features a regular sized Skeletor POP! sitting on a really cool version of his bone throne. I will give Target and Funko credit in that this guy has been available online quite a few times, so hopefully you'll be able to get your hands on one if you need this guy for your collection. And wow, do you need this guy for your collection. He's hands down one of my favorite POP! vinyl releases ever! Let's take a look at Skeletor on Throne #68 after the break... 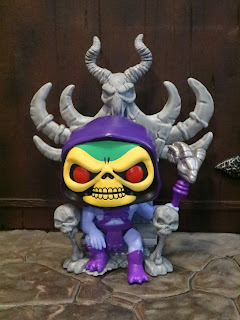 The Facts:
Height: Skeletor is around 4 inches while the throne is about 6 1/2 inches
Articulation: Swivel head
Accessories: None
Non-Scalper Price: $25 dollars 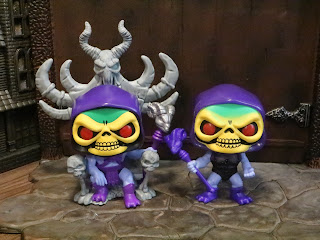 Comparison:
* While most of Skeletor on Throne #68 (left) is new, the head is shared with Battle Armor Skeletor #563 (right). Most Skeletor POP! vinyls use that same head and since it's a great sculpt there doesn't seem to be much reason to change it up. The paint is sharper and crisper on this Skeletor while the body is more Filmation inspired. 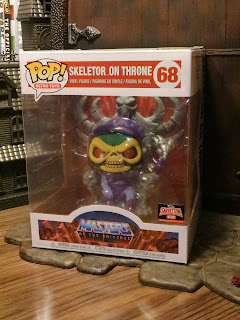 The Packaging:
* Skeletor comes in a larger box since he's a larger POP! vinyl due to the presence of his throne. Like most of the Masters of the Universe POP! release from the last 8 months or so, he's sold under the POP! Retro Toys banner. 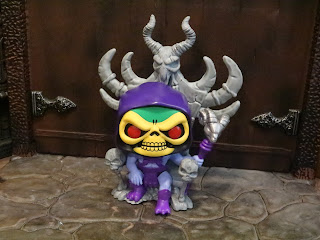 The Positives:
* Skeletor looks incredible chilling on his throne. While he's not "massive" or anything he really does look quite impressive and menacing on his bone throne. Skeletor is permanently attached to the throne and his body is a brand new sculpt that depicts him in a sitting position. Like most other POP! vinyls his head can swivel, too, so you can pose him a hit on the shelf as he watches over all of your other Evil Warriors. 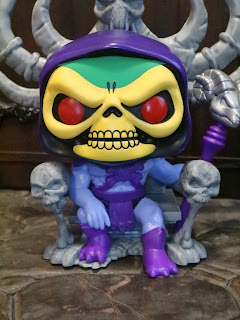 * Here's a close up shot of Skeletor. He's wearing his traditional outfit and looking like a boss all hunched over on his throne. 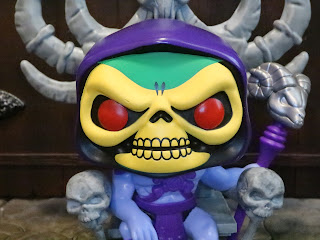 * The paint applications on the head are super crisp and clean and those black highlights really bring out the detail. I like the black around the edges of the hood, too. It really helps just improve the look of the figure overall. 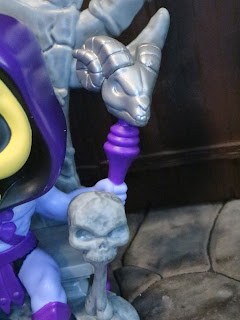 * Check out that Havoc Staff! It looks really nice and has a ram skull headpiece that's colored differently from the staff, just like the Filmation or 200x version. 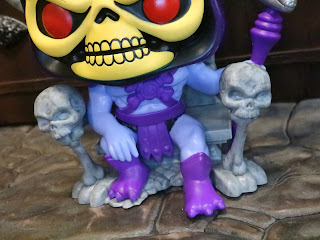 * The skulls adorning the base of the throne are really neat, too. Plus, the throne isn't just one solid color; it actually has a nice marbled texture to it that makes it look like stone. 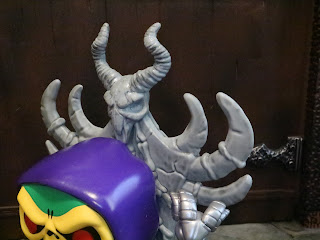 * The top of the throne is really nicely decorated and looks quite sharp and menacing. This is super nice work from Funko! 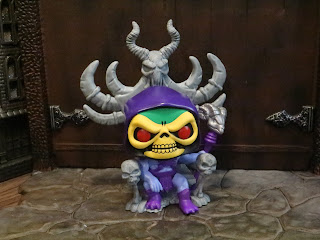