What's up everyone? My family's journey through the MCU continues plus I spent a lot of time reading this week. First up? WandaVision of course! 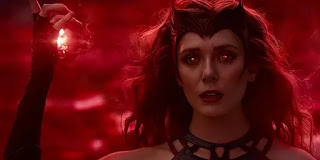 Last week we reached the end of WandaVision and overall I think it was a pretty satisfying series. I loved the television sitcom framing, the weekly pacing of the show (rather than a drop of all episodes), the conversations I had with friends and family every week, the time spent with my family turning this into a Friday night event, and I came to love Wanda and Vision. You'll find a multiverse worth of opinions on the show overall but, ultimately, I think the show's greatest success was really getting viewers attached to Wanda and Vision. After Endgame and the untimely death of Chadwick Boseman, it seemed to me that Marvel was going to have a bit of an issue leading into Phase IV with having characters that audiences were heavily invested in like they were with Iron Man, Cap, and Thor. I knew the individual franchises like Guardians of the Galaxy, Spider-Man, and Captain Marvel would be OK but what was the future of the Avengers and the MCU as a whole? Maybe WandaVision doesn't completely address that question but whether the future of the MCU is with a new group of Avengers, mutants, or the multiverse, WandaVision gave me some confidence that "secondary" characters can be built up to being A-list draws. The performances were wonderful overall, and that was the main appeal and purpose. We now care more about these characters going in. If The Falcon and The Winter Soldier can do the same thing for Sam and Bucky the Phase IV will be in even better shape.
Now, for a bit of criticism, I do think the show missed a couple opportunities to tie itself in further to future projects (Doctor Strange not intervening at some point, even if just in an after credits scene) seemed odd given the subject matter of the show, and a few things set up by the show itself didn't pay off, namely Monica Rambeau's comment about having someone who could get her into the hex and Evan Peters' Quicksilver. When you run a weekly show and toss out things like this it definitely encourages fan speculation and often you have folks overhyped with their ideas (Mephisto, anyone?) but those two "teases" were just handled kind of poorly and both were duds. That being said, I'd consider WandaVision taken as a whole to be one of the stronger entries in the MCU canon. I'll probably get around to ranking these as I go through my rewatch of the MCU in the weeks ahead. 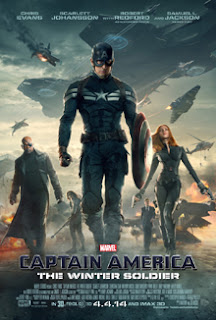 It's been really fun watching the Phase II MCU films with my daughter as we're able to tell her how old she was when they came out. Released in April 2014 I still think Captain America: The Winter Soldier is one of the best MCU films around. They've mostly all been fun movies but TWS definitely elevated the MCU. It doesn't forget it's a comic books film but, at the same time, it does ask some tough questions and presents some morally ambiguous ideas. It also has some of the best fight scenes in the MCU. I love how Cap, Black Widow, the Winter Soldier, and the Falcon fight in this film.  The Russo Brothers just handle these characters so well, deftly moving back and forth between poignant moments of loss and tragedy with moments of levity. They're equally as good with intimate scenes like Steve Rogers vising an elderly Peggy Carter suffering from dementia as they are with massive battle scenes involving dozens of characters and multiple flying warships. After two of the weakest MCU films in the entire canon (Iron Man 3 and Thor: The Dark World) TWS was a welcome treat. Is it still one of the best? Yes it is. 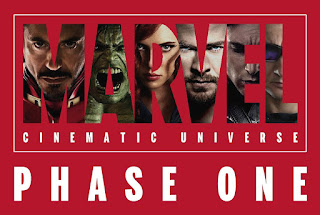 I figured I should take a quick break and rank the Phase I films. Here they are:
1. The Avengers
2. Captain America: The First Avenger
3. Iron Man 2
4. Iron Man 1
5. Thor
6. The Incredible Hulk 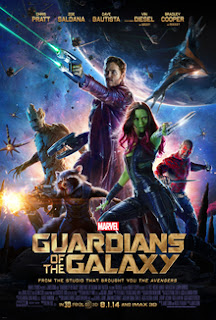 Gosh, remember back in 2014 when everyone kept speculating that Guardians of the Galaxy was going to be the film that killed the MCU? To quote Napoleon Dynamite: "Idiots!" While it's utterly different than every other MCU film before it (it has way more in common with Star Wars and The Fifth Element), Guardians of the Galaxy is my favorite MCU film up to this point in my rewatch. It's hilarious, exciting, and has strangely poignant moments involving a racoon and a sentient plan. With the best soundtrack in the MCU Guardians does it's own thing while also finally addressing the true threat Thanos poses and how powerful the Infinity Stones are. At the time a lot of people treated this film as inconsequential to the MCU but, ultimately, it was one of the major stepping stones paving the ways towards Infinity War and Endgame. Guardians feels the least restrained by the typical MCU formula and it seems like James Gunn got his way with this one more often than not. This one edges out Captain America: The Winter Soldier in my book simply because of how enjoyable it is the whole way through. 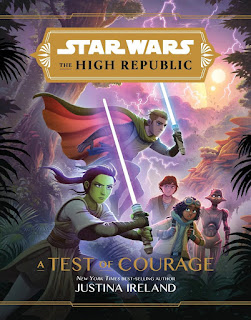 Last week I finished Light of the Jedi by Charles Soule and it left me wanting more, so I jumped in to another Star Wars: The High Republic tale: A Test of Courage by Justina Ireland. Justina Ireland has written two other Star Wars junior novels, both of which were just fine (Lando's Luck and Spark of the Resistance, which I remember being pretty good). Like most of the Star Wars junior novels, A Test of Courage is in canon but ultimately proves to be truly a side story. It's a good side story, don't get me wrong, but it doesn't offer anything that moves the plot forward from Light of the Jedi. There's some great world building, though, and we do get more glimpses of the attitudes of the Jedi and the Nihil during the High Republic era. It's enjoyable enough though it seems odd to have a junior novel based on the events of a regular novel. The plot is quick, the characters are fun, and there's a lightsaber whip in here. Not a bad distraction for a couple days and the book itself is quite lovely. 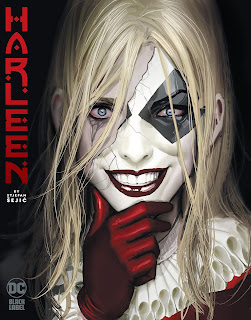 Harley Quinn has become another character with an extremely popular origin story that storytellers love to visit and while there's nothing that was earth shatteringly new here, Stjepan Sejic's Harleen is without a doubt the best take on Dr. Harleen Quinzel's tale of tragedy. I'd compare it to something like Frank Miller's Batman: Year One though Harleen isn't afraid to bring out the big guns. Batman, Harvey Dent, Dr. Hugo Strange, Jim Gordon, Poison Ivy, and of course the Joker, all play a major part in Harley's tale, though almost everything is seen through the viewpoint of Harleen Quinzell. She never takes a backseat to anyone and is absolutely the most riveting character in the book. It's amazing how popular Harley Quinn has become and I'm hoping that great stories continue to be told about her, especially tales that look forwrd rather than back. Sejic's writing is excellent and he really captures the voice of each character. The art is exceptional. It's beautiful and always easy to follow, melding perfectly with the text. This is one of the most beautiful graphic novels I've laid my hands on. 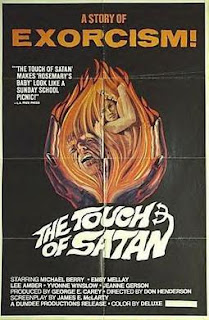 Not last but without a doubt least, let's talk about The Touch of Satan, a 1971 horror film about a traveling man who meets up with Melissa, a modern day witch in cahoots with Satan. I caught part of the Mystery Science Theater 3000 episode with the movie a few months ago but I wanted to see the entire thing. Fortunately, I realized I had it in one of the MST3K dvd sets so I watched it this past week. This is a bizarre and forgettable little horror film that's almost watchable, so you'll oddly find yourself curious about the plot and not just the jokes (though the jokes are great). Mike's line "I've said "Zah" in better places than this" is one of the greats and it just keeps giving throughout the episode. Of course, context is important, so it sounds like nonsense to you now, but just wait! I've always preferred the MST3K horror films, fantasy films, and just bad movies from the 70s and 80s more than the old sci-fi B-movies so this one's right up my alley. And no, this movie doesn't make Rosemary's Baby look like a Sunday School Picnic. This movie is a minor summertime business meeting that no one shows up for at best.

Now, last, but never least, let's look at the week's most popular reviews! There wasn't a lot of changes this week though Zodac did make a showing...

Roboto from Masters of the Universe Origins is still up at the top slot for his second week, so lots of fans are clearly saying "Domo arigato, Mr. Roboto." I was actually a bit disappointed by this one due to the lack of gears in his chest and the way his torso is loose and wobbly but clearly folks are interested in checking him out.

Missing in Action: Toylines that Didn't Make the Cut in 2020 is one of my annual end of the year lists. This one is always interesting, though sometimes heartbreaking, as I go over the toylines I loved from the previous year that seemed to have disappeared. Last year's heartbreaker for me was Hasbro's Overwatch Ultimates. I loved that line! This is the fourth week it's on the list so maybe others are heartbroken, too?

Lords of Power from Masters of the Universe Origins was the 2020 PowerCon exclusive set based on the prototypes for the vintage MOTU line when the line was still going to be called Lords of Power. The set is on its ninth week on the list and while it was way, way too expensive, it's also pretty cool for fans who take interest in the development of MOTU. MOTU Origins looks like it's going to have a big year in 2021 and that very well may drive up demand for this set.

Drizzt & Guenhwyvar from Dungeons & Dragons: Forgotten Realms is a Hasbro Pulse exclusive that is still available for sale and I'm not sure if that's good or bad. usually Hasbro Pulse exclusives sell out in preorder status but Drizzt is still around. Did Hasbro actually make enough for everyone or are collectors just largely uninterested in what may end up being a one-off release? Drizzt is a good figure for sure, though Guenhwyvar is a bit of a disappointment. Lots of accessories, though, and the price is right for the set. This one is on it's second week.

10 Members of the Vintage G.I. Joe Team Who Would be Awesome in G.I. Joe: The Classified Series is one of my top 10 lists. In this one, which is on its second week on the list, I pick my favorite of the vintage Joe figures (just the G.I. Joe team, no Cobra yet) who aren't guaranteed A-listers that would translate well into the Classified Series. Who are your picks?

That's it for this week! It's Friday night and there's no WandaVision! What to do? We're watching Age of Ultron. Go do something fun. Also, remember to set your clocks for Daylight Saving Time on Sunday!